Home » Strong Pitching Guides BC to Series Win in Blacksburg 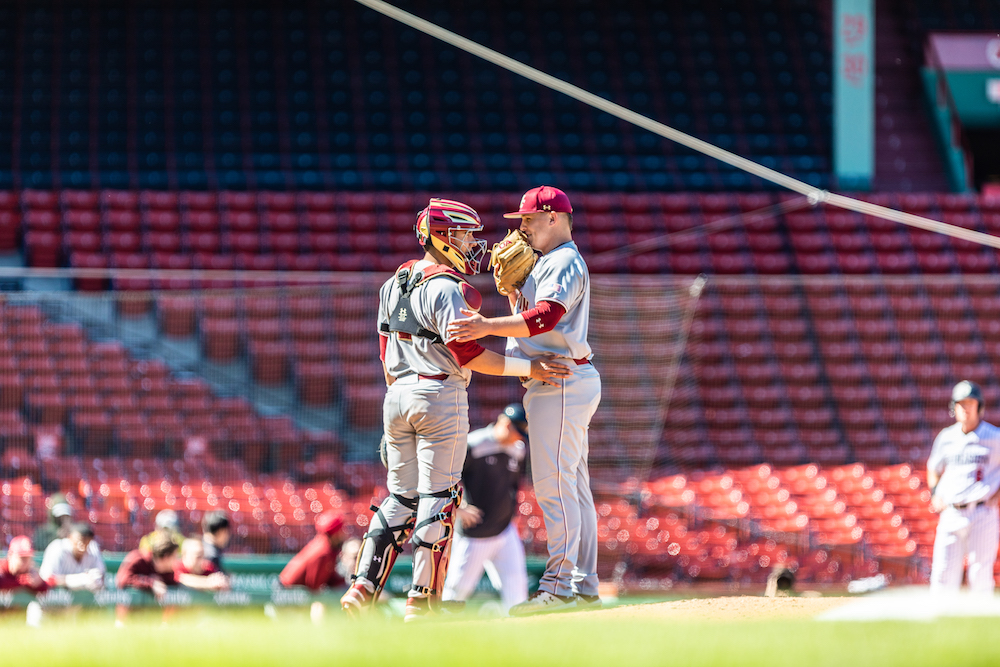 Strong Pitching Guides BC to Series Win in Blacksburg

Boston College baseball won the first game of the weekend series with Virginia Tech in Blacksburg, Va., but followed that strong showing up with a seven-run setback. Heading into Monday night’s finale, it seemed like a familiar script that has haunted the Eagles all season was once again rearing its ugly head.

BC had won at least one game in six conference series’ thus far, and it’s only series win came at the end of March against then-No. 19 Florida State. Entering Monday’s series finale broadcast live on ESPNU, a lot was at stake. This time, though, the Eagles delivered, winning, 5-2, and taking two of three from the Hokies for its first road series win against them since 2006—reaching their highest win total since 2016.

Suozzi handed BC its first lead in the second inning, lining an RBI single up the middle past Hokies’ starter Nic Enright, who didn’t make it out of the third. Morisette made it 2-0 with a run-scoring double in the third, then Suozzi greeted VTech reliever Peyton Alford with a solo home run on the first pitch of the fourth inning.

Up, 3-0, the Eagles were in a comfortable position, especially with an efficient performance from starter Joe Mancini. He pitched into the fourth and didn’t allow a run in an opener role, working around three hits and two walks to extend an individual scoreless innings streak to 13.

Mancini gave way to Thomas Lane in the fourth, and he escaped a bases loaded jam after inheriting two of the three runners. Lane pitched into the seventh, allowing a lone run via a fielder’s choice in the seventh and avoiding further damage when closer Matt Gill entered. Gill would give up an RBI single to Nick Biddison in the eighth, but a two-run sixth from BC’s lineup—the runs coming via an error—was enough to overcome the brief comeback.

Gill wasn’t able to finish off VTech in the ninth, though, as he hit a batsmen and allowed a single from Nate Owens before being pulled. That spoiled a chance at his team-best sixth save, but John Witkowski was up to par out of the Eagles bullpen. The senior registered his third save of the year, inducing a groundout before getting a strikeout swinging to secure BC’s second series win of the conference season.

In a stark contrast to Friday night’s pitchers duel, both teams came out swinging in the Saturday matinee. The teams combined for 23 runs on 26 hits, but a seven-run sixth inning from the Eagles—one that tied the game at eight apiece—wasn’t enough as the Hokies used a five-run seventh to pull away for the 15-8 win.

BC starter Mason Pelio struggled mightily for the second time in his last three starts, failing to make it out of the fifth inning after allowing eight runs on nine hits, both season-worst totals. He escaped being charged with the loss, but it was a tough day at the office for the freshman who has now seen the Eagles lose each of his last four starts.

VTech third baseman Kevin Madden went 4-for-5 out of the cleanup spot and drove in three runs as one of four Hokies who registered multi-hit days. Madden scored the game’s first run, coming home on a two-run double in the first inning from Tanner Thomas. Teammate Kerry Carpenter—who scored four runs—added a two-run shot in the third inning, and VTech was quickly up, 4-0.

The Hokies extended the lead to 8-1 after five innings of play, answering an RBI single from BC’s Gian Martellini with a pair of multi-run innings. Michael Fernandez drove in a run with a single in the fourth, then VTech chased Pelio in the fifth with Owens’ bases-loaded, three-run double. It seemed like an insurmountable lead, especially with Chris Gerard spinning five one-run innings for the hosts. The Hokies’ bullpen wasn’t in sync, though, and that was especially evident during a disastrous sixth inning.

Jack Dellinger entered, walked Jake Alu, gave up a double to Cody Morisette, and then allowed a run to come in on Brian Dempsey’s groundout. He quickly loaded up the bases via a walk and a single, and that was enough for VTech manager John Szefc, who turned to Peyton Alford. The junior southpaw didn’t fare much better, however, as Suozzi drove in two runs with a fielder’s choice before Alford loaded the bases again. The Hokies brought in Connor Yoder, who immediately walked in a run and then left after giving up a two-run single to Alu.

Another reliever, Zach Brzykcy, gave up a game-tying single to Morisette, but escaped a bases-loaded jam. Brzykcy’s escape act gave the Hokies life again, and they immediately retook the lead against Michael Marzonie. BC’s reliever gave up an RBI single to Nick Holesa, then Joey Walsh allowed another run-scoring single to Madden.

VTech had a two-run lead, but it was far from done. Walsh loaded up the bases with one out in the seventh, and all three runs—plus two more—would eventually come in. John Witkowski gave up two-run singles to Nick Biddison and Madden, then his replacement, Zack Stromberg, allowed an RBI double to Thomas. It was a disastrous frame, one that sucked the life out of BC, which went on to leave four runners on base in the final two innings.

For the third game in a row, the Eagles won by a narrow 2-1 margin, this time doing so on the strength of another excellent outing from senior Dan Metzdorf. The southpaw pitched into the eighth inning and didn’t allow a run, leaving with two outs having scattered eight hits and three walks while striking out three. Backed up by an RBI single from Cody Morissette and a groundout from Jack Cunningham, BC was able to overcome a shaky ninth inning from closer Matt Gill and take the first game of the series for the second weekend in a row.

Metzdorf hasn’t allowed a run in 15 innings, fresh off a gem against Duke last Friday. He moved into the top 10 in BC’s record books in both career strikeouts and innings pitched and was particularly effective when he ran into trouble against the Hokies. In the fifth, he gave up singles to Dalton Harum and Jack Owens, but escaped with a groundout and a strikeout. Then, in the sixth, Madden doubled to open the frame and moved to third on a single from Thomas—but both were ultimately left in scoring position, as Metzdorf induced a flyout and struck out Harum on a full count.

The Eagles struggled similarly at times to make the most of opportunities against VTech starter Ian Seymour, who allowed two earned runs over six innings with eight strikeouts. After a rain delay pushed the start of the game back by an hour-plus, Seymour took the mound and immediately ran into trouble, as Alu—en route to a 3-for-4 day at the plate—singled on the second pitch he saw. He eventually moved to third with one out, but was stranded there. The next time the hot-hitting third baseman was up, though, he doubled to right field, move to third on a passed ball, and scored on Morissette’s single up the middle.

BC got a much-needed insurance run in what would be Seymour’s final inning of work. Morisette drew a walk on a full count, went to second on a wild pitch, then moved within 90 feet of home on a sacrifice bunt from Brian Dempsey who beat out the throw. Cunningham grounded into a double play, but it was good enough to bring in Morisette and put the Eagles up two.

Metzdorf left in the eighth with two outs after his 125th pitch of the night recorded a strikeout. Thomas Lane walked the first batter he faced in relief, but got an inning-ending groundout to bridge the gap to the ninth. Gill had an up-and-down final inning, giving up a single to Harum and a double to Owens with just one out. Biddison beat out an infield single to bring Harum in, and a walk loaded the bases—with the game-winning run standing at second base. Gill got a ground ball back to him and threw out the runner coming to the plate, before inducing a harmless groundout to Dempsey at second base to end the game.

All things considered, it was a strong weekend for BC. Even in Sunday’s loss—which featured the Eagles digging out of a giant hole only to find themselves back in it—BC showed plenty of fight. It has four home games to close out the year, and if it is to return to the ACC Tournament, the Eagles will need play to their full ability against Notre Dame—one of the conference’s worst teams. Sitting at 26 wins, and with Maine being the last remaining non-conference opponent, BC has a good shot to win out the rest of the way. Should that happen, an up-and-down year will go down as a 30-win campaign, the first since the program-defining 2016 season.