Home » BC Gives up 33 Runs, Swept by Pitt to End Season 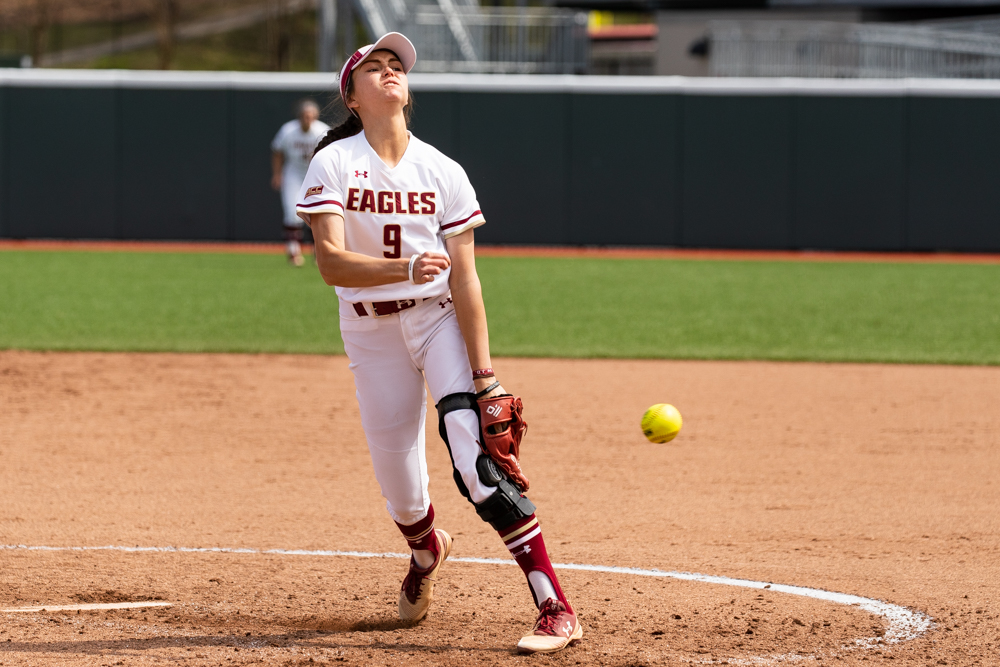 BC Gives up 33 Runs, Swept by Pitt to End Season

Boston College softball entered its weekend series against Pittsburgh knowing that it could very well be playing its final games of the year. With both the Eagles and Panthers sporting the worst winning percentages in conference play, it was highly likely that both would miss the ACC Tournament. But even against a 10-win Pittsburgh team, BC completely dropped the ball. The Eagles were swept by the Panthers, as they gave up a combined total of 33 runs over the weekend, all while being shut out twice.

The final game of the series marked a poetic end to the year for BC (18-35, 4-20 Atlantic Coast). As has been the case all season long, the Eagles’ pitching staff struggled immensely while the bats dealt with inconsistency. BC actually matched the number of hits that Pittsburgh (13-40, 7-17) recorded with six on the day. The difference? Driving in runners in scoring position.

Over seven innings of play, the Eagles left six runners stranded. BC’s best opportunities came at the onset and the tail end of the contest in the first and seventh innings. To start the game, Lexi DiEmmanuele singled and then stole second. DiEmmanuele was the lone bright spot for the Eagles during the weekend. Playing in the final games of her BC career, DiEmmanuele went 7-for-11 while logging her sixth triple of the year and the 14th of her career—both marks that represent program records. Emme Martinez and Allyson Moore were then walked, which loaded the bases. But from there, Pittsburgh pitcher Taylor Rahack eliminated two scoring runs, as Gianna Boccagno and Ellie Mataya reached on fielder’s choices. With the bases still loaded, Carlie Sanders went down swinging, squashing a prime opportunity to score.

Trailing by seven in the final inning, the Eagles once again had a chance to tally some runs, but they came up empty. Sanders, Mataya, and Jules Trevino all reached base. With one out and the bases loaded, Carly Severini flied out deep to right. Sanders had advanced too far and couldn’t make it back to second before being tagged out.

Meanwhile, the Panthers—as they had done all series—scored with ease. After a clean first inning and drawing the first two outs in the second, it appeared that C.C. Cook was on her way to a quality outing. That hope quickly dissipated as the sophomore walked two straight batters before conceding a three-run home run to Morgan Batesole. By the fourth inning, Susannah Anderson subbed in, but she couldn’t stop the Panthers, either. The freshman ceded a two-run homer, this time to Brittany Knight. Pittsburgh already had the contest in the bag, but it added two runs in the next inning as Taylor Myers drove in both Brie Horrell and Hannah Bach with a single.

While BC was shut out on Friday and Sunday, it pup a much stronger fight on Saturday to the tune of 12 runs. Unfortunately for the Eagles, they simply could not silence the Panthers’ bats.

Through the first two innings, it looked like BC was well on its way to victory. The Eagles jumped the Panthers for seven quick runs, as Martinez, Moore, Boccagno, and Kristin Giery all notched RBIs. After Camryn Dolby gave up several hits in the early going, Anderson came in and did a solid job on the mound—that is, until the fourth inning.

Thanks to a sac fly from Boccagno, BC led, 8-2, heading into the bottom of the third. Anderson gave up a double to Gabrielle Fredericks and followed that up by allowing Alexee Haynes to go deep to center. Head coach Ashley Obrest switched Anderson out for Cook, but this decision backfired spectacularly. Cook walked the first batter she saw in Alexis Solak before picking up two outs, but she couldn’t log the final out. After being tagged for two singles, Cook walked Olivia Gray with the bases loaded, cutting Pittsburgh’s deficit to three. The Panthers soon took the lead off the bat of Hunter Levesque, who smashed a grand slam to left field. Dolby relieved Cook and recorded the final out, ending the disastrous frame, but not without giving up two walks.

Pittsburgh extended its lead in the fourth inning with a two-run bomb from Gray, but BC wasn’t throwing in the towel. The Eagles burned the Panthers for five consecutive hits, taking a one-run lead in the process. Each team was quiet until the bottom of the seventh. Dolby maintained her position in the circle as she managed to blank the Panthers after giving up two runs in the fourth inning. But the freshman could not seal the deal. Dolby walked Haynes, allowed Solak to double, and then hit Connor McGaffic with a pitch, loading the bases with no outs. Dolby navigated the trouble by getting the next two batters to pop out. With the game on the line, Kaitlyn Kruger came to the plate to pinch hit for Batesole. Kruger broke the hearts of Eagles fans, as she hit a walkoff grand slam, dealing BC a devastating loss.

On Friday, the Eagles kicked off the series with a disappointing defeat. Anderson got the start, and she pitched a shutout through the first three innings. But the first-year pitcher was eventually flagged in the fourth, giving up a two-run double to Walker Barbee. Dolby was inserted in Anderson’s place, but she couldn’t stop the bleeding. The Panthers yielded two singles, courtesy of Gray and Levesque, driving in three runs to further extend their lead.

Pittsburgh then enforced the mercy rule on the back of a six-run outburst in the sixth inning. Cook, who had entered in place of Dolby, gave up a solo shot to Kruger before displaying errant command in walking three batters and hitting Horrell with a pitch. With the Panthers sporting a seven-run lead and the bases loaded, Kendra Friedt relieved Cook. She only faced one batter—Solak—as she gave up a grand slam, marking the end of the contest.

The Eagles actually outhit the Panthers, 7-6, but they once again struggled to bring runners home. BC had runners on the corners after both Giery and Boccagno hit singles, but Sanders grounded out to end the threat. BC left the bases loaded not once, but twice. The first instance came in the third inning, as DiEmmanuele doubled and stole third. Martinez and Moore then walked, but with two outs, Gianna Randazza fouled out. Again, BC wasted a prime opportunity in the fifth. DiEmmanuele, Trevino, and Martinez all singled, but none of them reached home plate. Moore and Randazza grounded out and flew out, respectively. Despite giving up seven hits and walking three Eagles, Pittsburgh pitcher Susan Dawson registered a shutout.

The Panthers’ weekend sweep marks the end of an utterly disappointing season for BC. Following three consecutive years of tallying 30-plus wins, the Eagles regressed to a mere total of 18 victories. Perhaps most alarming was BC’s shocking inability to defeat conference foes. In 24 games, the Eagles only recorded four ACC victories, which translated to a .167 winning percentage, by far worst in the conference. While the team was certainly expected to take a step back, with a number of seniors departing from last year, BC and its talented freshman class underachieved in 2019. Obrest and Co. now have to go back to the drawing board to avoid a fate similar to this one next season.