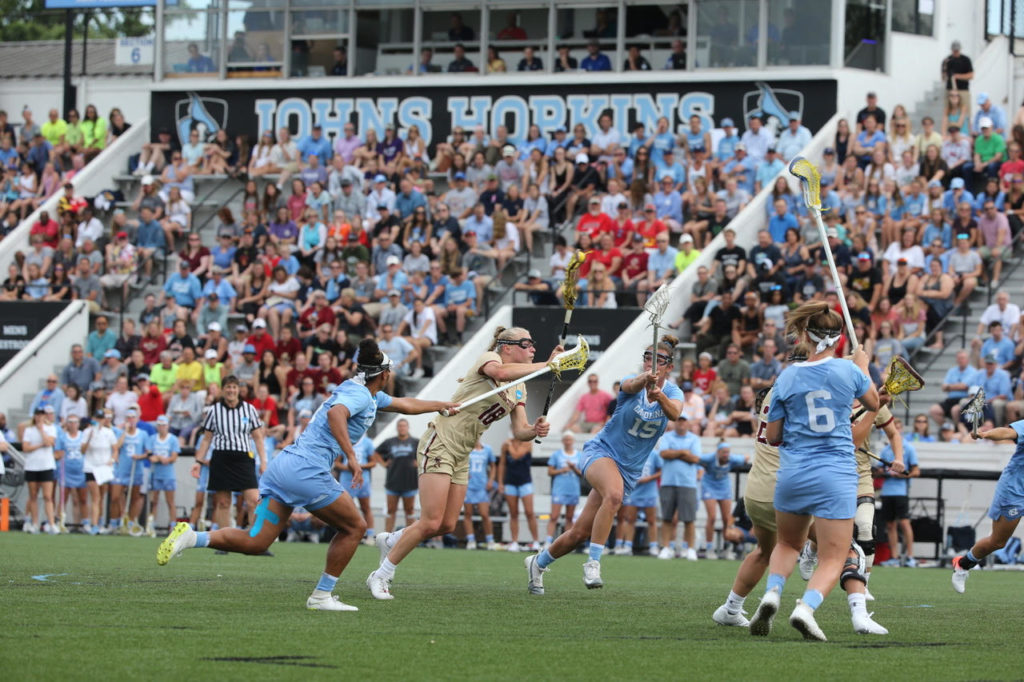 BALTIMORE—With 11:27 to play in the first half of Boston College lacrosse’s Final Four game against No. 3 and third-seeded North Carolina, the Eagles were a long ways away from a third straight national championship appearance. BC trailed, 7-1, looked discombobulated on offense, and simply couldn’t keep up with Tar Heels on the defensive end. But in a comeback for the ages, the Eagles flipped the script, finishing the first half on a 5-1 run to cut the Tar Heels’ lead to 8-6 at the break, before rallying to take a 10-9 lead in the second half.

UNC wouldn’t go away, though, and a back-and-forth second half ended with the teams knotted at 14, setting the stage for a drama-filled sudden-death overtime. In the end, it was the reigning Tewaaraton Award winner, Sam Apuzzo, providing yet another unforgettable moment and finding the back of the net in the second overtime period to send BC to the national championship with a 15-14 victory. Here are 10 observations from the Eagles’ wildest game of the season.

In BC’s 2018 Final Four contest against Maryland, BC trailed, 6-2, midway through the first half before coming all the way back to eventually win and grab the program’s first-ever win against the Terrapins, 15-13. In 2019, the Eagles’ resilience was once again on display on the biggest of stages. After Scottie Rose Growney put the Tar Heels up, 7-1, it was difficult to imagine BC being able to climb out of a six-goal deficit against its ACC nemesis. To that point, a tough UNC defense had locked down Apuzzo, the Eagles’ leading scorer, and was making it difficult for BC to create quality shooting opportunities. But like they’ve done so often over the past three seasons, the Eagles found a way.

First it was Apuzzo in semi-transition, stepping to the top of the crease and firing home to spark the BC comeback, but then it was players like Cara Urbank—who finished with a team-high four goals—Jordan Lappin and Kate Taylor, who both tallied go-ahead goals in the second half, and Lauren Daly, who made the biggest save of the contest in the first overtime period, all helping the Eagles complete their biggest come-from-behind victory of the season and advance to the National Championship. Perhaps nothing tells the story of the Eagles’ resilience better than an effort from Dempsey Arsenault, though. After Sheila Rietano lost control of the ball in the offensive zone midway through the second half and Caroline Wakefield gained control of the ground ball, the midfielder sprinted 50 yards back downfield, forcing a turnover with a lunging stick check, helping the Eagles regain possession.

BC could have folded several times during the game, but found a way to dig deep and fight back, both offensively and defensively. The Apuzzo game-winner will likely be the lasting memory of this game, but equally as important was the resilience BC displayed in climbing out of a six-goal deficit.

Daly has endured a difficult year for the Eagles, mostly due to an injury that sidelined her for a significant portion of the season. But in the biggest game of BC’s 2019 campaign, she found a way to step up. Coming on in relief of Abbey Ngai, who was replaced after allowing six straight goals without a save to begin the game, the senior immediately made an impact, blocking a pair of shots from Gianna Bowe and a drive from Kara Klages to help the Eagles climb back into the game.

No save the senior made, however, was as big as the one she produced in the first overtime. After Dempsey Arsenault turned the ball over, BC needed a defensive stop to stay in the contest. Olivia Ferrucci snuck free of the Eagles’ defense, and earned a wide-open point-blank look in front of goal, but Daly made an incredible reflex save, stretching to her right to stonewall the junior midfielder and stop a sure goal. The senior finished with seven saves, a big part of a BC defense that held the Tar Heels to just seven goals over the final 50 minutes of the contest.

Urbank tends to be an overlooked member of the Eagles’ offense, considering that Apuzzo, Arsenault, and Kenzie Kent are all nationally-recognized stars, but she also reached the 50-goal mark for BC this season and, on Friday, once again reminded everyone at Homewood Field that she too can fill up a scoresheet. First, she caused a turnover, then used a spin move to create space and fire home from the right side of the goal. Then, with the Eagles trailing, 9-6, in the second half, she isolated up top and cut to her right before firing home through UNC goaltender Taylor Moreno’s legs to cut the deficit to two.

She capped off a team best four-goal night with consecutive scores that put BC up, 12-10, first on a similar set to her second goal, then with a bouncing shot on the one-man advantage. The scoring outburst helped offset quiet games from Apuzzo and Kent, who combined for just four goals.

“Great players make great plays in the moments that they have to,” UNC head coach Jenny Levy remarked after the contest. That was in reference to Apuzzo, who once again found a way to step up when it mattered most. After being held to just one goal in regulation, thanks to excellent man-marking from the Tar Heels’ Emma Trenchard, the senior had a chance to end the game at the end of regulation, but was denied by a crowd of sticks and UNC backup goaltender Elise Hennessey. Luckily for Apuzzo, she got another chance in the second overtime, and took full advantage.

After receiving the ball behind the cage, the reigning Tewaaraton Award winner used a series of moves to create a sliver of space from Trenchard, before ripping a laser past Hennessey to win the game and send the Eagles back to the national championship. It was just the latest in a series of incredible moments that the senior has compiled over her record-breaking career in Chestnut Hill, but perhaps the most important.

Of course, Apuzzo almost never got that chance. With time winding down in the first overtime, UNC earned the ball back after Hennessey forced a turnover, and had a chance to win the game. Gianna Bowe, whose footwork caused BC defenders problems all game long, worked her way free of Miller and had an excellent look at goal, but her shot crashed off the inside of the post before being knocked around in the crease and finally out of harm’s way as the period expired. The shot was just another reminder of the razor-thin margins the Eagles had to walk to complete their comeback, and for the Tar Heels, a reminder of how close they came to the national title game.

The Eagles ended the game with 10 giveaways compared to UNC’s 15, but a couple of particularly sloppy ones nearly lost BC the game. With the Eagles down, 3-0, a bad pass from Brooke Troy that Elizabeth Miller couldn’t handle led to a 2-on-1 breakaway for the Tar Heels and an easy goal for Jamie Ortega. Then, after a Lauren Daly save, Miller once again lost the ball on an attempted clear. Olivia Ferrucci picked up the ground ball, and another 2-on-1 break led to a score for Growney. It didn’t end up costing the Eagles a chance at the National Championship, but a couple of uncharacteristically bad mistakes made BC’s comeback more difficult than it should have been.

Lost in all the drama of the sudden-death overtime, as well as the Eagles’ inspired comeback from their early deficit, was a wild ending to regulation that provided enough momentum swings for a full game. When Urbank put BC up, 12-10, it looked like the Eagles were in control, but UNC responded admirably, as a pair of Kara Klages tallies sandwiched Ortega’s fourth goal of the contest and put the Tar Heels back on top, 13-12.

Then it was BC’s turn. Dempsey Arsenault snuck into the crease and fired home from close range, before Jordan Lappin finished off a pretty passing play with her only goal of the contest.  The two-goal run put the Eagles a draw control win away from being able to run out most of the remaining clock, but UNC had other plans. After the Tar Heels gained possession, Ortega scored UNC’s final goal of the game with one minute to knot the contest at 14, setting the stage for an overtime that, improbably, was even more nerve-wracking than the end of regulation.

Eerily, the game was a near repeat of the ACC Championship between the two teams, but this time with the roles reversed. When the teams met in Alumni Stadium, it was the Eagles who jumped out to an early advantage, scoring the game’s first five goals. Then, UNC switched goalies, as Hennessey took over for Moreno, before rallying to tie the game in the second half and claiming victory. But Friday at Homewood Field, it was UNC who came out of the gates hot, before BC made a goalie switch of its own that sparked a comeback and eventual victory. The only difference? The ACC Championship—perhaps thankfully for both sets of fans who had to sit through almost nearly nine minutes of sudden-death tension—had no overtime drama.

9) Excellence in the Circle

The team that has won the majority of draw controls has won each of the last four meetings between the two teams, and Friday was no different. BC had a 20-12 advantage in the circle, and, perhaps most importantly, won two of three draw controls in the overtime period. Apuzzo was excellent per usual in that regard, winning eight faceoffs, while Kent came up with the most crucial draw control of the contest, nabbing the loose ball at the beginning of the second overtime that led to Apuzzo’s sudden death winner.

Lastly, the environment in the stadium throughout the contest was impressively electric, with the majority of the stands packed, and both sets of fans making their voices heard throughout the game. The game was also televised on ESPNews, providing the semifinal with a national platform it hasn’t had in years past. Just as importantly, the product on the field matched the buzz surrounding the event.

“A 15-14 overtime thriller on ESPNews. Way to go women’s lacrosse,” Levy stated after the game.