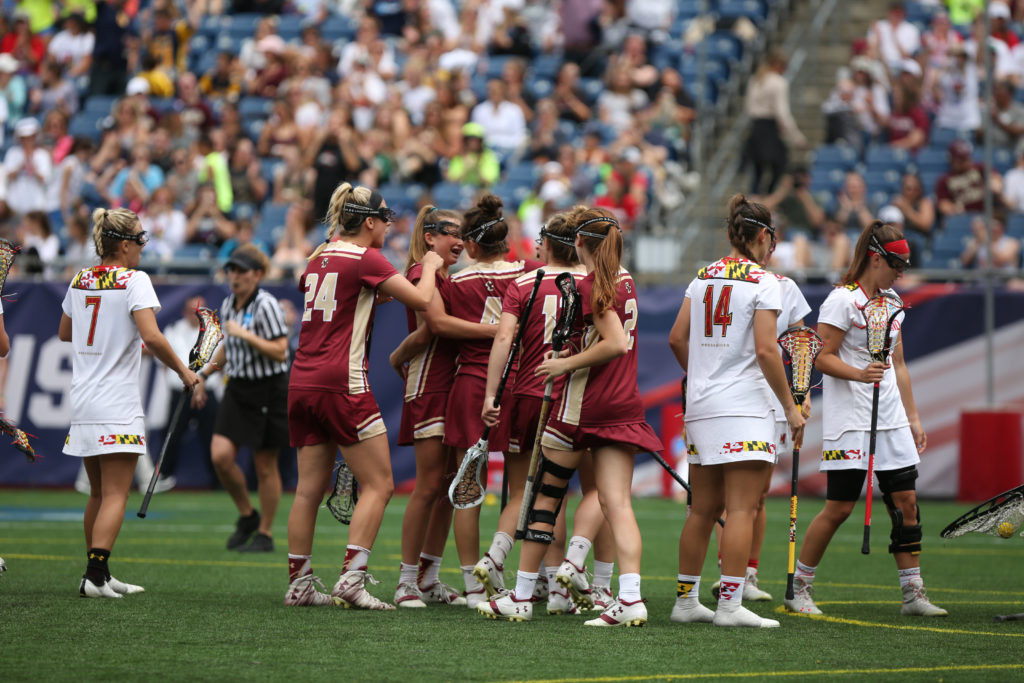 Taking a Look at BC and Maryland’s Last Three Meetings

Despite not playing in the same conference, Boston College lacrosse and Maryland are by no means unfamiliar foes. When the two meet in the National Championship on Sunday, they will be facing off for the fourth time in the past three seasons. The Terrapins have gotten the better of the Eagles in two of the previous three matchups, although BC did record its first-ever win over Maryland in 2018—getting revenge for a loss in the 2017 National Championship. Here’s a look at what’s transpired in each of the past three games between the two teams.

How it Happened: This game was sweet revenge for the Eagles, who avenged a defeat to the Terrapins in the 2017 National Championship. Just like this season’s wild Final Four contest against UNC, BC quickly found itself in an early hole. Dempsey Arsenault and Tess Chandler both scored early for the Eagles, but after Taylor Hensh found the net unassisted with 16 minutes to play in the opening period, Maryland had a commanding 6-2 lead. Two and a half minutes later, Sam Apuzzo found the net, though, helping spark a 5-0 run that allowed BC to grab its first lead of the game, a 7-6 advantage. After that, the teams traded goals, with Chandler’s second score of the night knotting the game at eight 90 seconds before the break.

In the early stages of the second half, neither team was able to gain much separation. Cara Urbank ripped twine just 30 seconds after the Eagles won the opening draw control, but Maryland responded through Jen Giles and Kali Hartshorn to reclaim a one-goal lead. That set the tone for a crazy opening 15 minutes of the period that ended with the teams knotted at 13 after Grace Griffin’s 30th goal of the season. That was the last time Maryland would score. Sam Apuzzo, on the other hand, wasn’t done yet.

With BC in possession as the clock ticked toward eight minutes, the then-junior received the ball in her traditional spot behind the cage, tightly guarded by Griffin. Using a trademark split step, Apuzzo got the midfielder to trip over the back end of the goal, before fading to her right and burying a shot top right corner. A minute later, Apuzzo would score her fourth goal of the game to put the Eagles up, 15-13—a scoreline which would ultimately prove to be final. Giles and Caroline Steele both shot wide on the Terrapins’ next two offensive possessions, helping BC run out the clock on its first-ever win against Maryland and advance to another national title game.

How it Happened: After a Cinderella run to the National Championship, the Eagles came up just short of the ultimate prize against perhaps the premier program in women’s college lacrosse. Once again, the Terrapins started fast. Hartshorn and Hensh logged goals in the first two minutes of the contest to give Maryland a 2-0 lead, before Apuzzo scored two goals to tie the game a little under eight minutes in.

The scoring slowed for both teams as the half progressed, and after Laura Frankenfield’s unassisted score with 10 minutes left in the first period evened things up at five, neither team found the back of the cage again before the horn sounded for halftime.

When the second half started, it was all Terrapins. Megan Whittle kicked things off with a goal 19 seconds in, before Steele and Giles piled on with individual two-goal runs. Giles’ second goal—which came just four and a half minutes into the period—gave Maryland a decisive 10-5 advantage. BC fought back, as Kenzie Kent—who finished with five goals and five assists and was named the tournament’s most outstanding player for her 37 point effort during BC’s national title game run—assisted Kate Weeks, before tallying twice in a row on sprints into the crease. Whittle briefly stopped the Eagles’ momentum with a goal, but Kent scored and then assisted Arsenault three minutes later to draw BC within one goal.

With 14 minutes to play, the Eagles trailed just 11-10, but the Terrapins stitched together the last significant scoring run of game, outscoring BC, 5-1, over the course of the next 10 minutes to put the game out of reach. Apuzzo would notch the final two scoring plays of the game—pushing her season total to 80 goals—but the Eagles still fell in their first National Championship appearance, 16-13.

The teams’ first meeting of 2017 came in College Park, Md., a place where the Terrapins hadn’t lost since 2012. For a little bit, it looked like the Eagles had a chance to change that.

After four straight Terrapins goals to start the game, Kayla O’Connor found the back of the net off a pass from Kaileen Hart—who finished with four goals and an assist—to get BC on the board with 18 minutes left in the first half. That goal sparked a 4-0 run from the Eagles that ended with Weeks’ game-tying score. Maryland pulled back in front, 8-5, before Hart fired home twice in the waning moments of the first half to send BC into the break hopeful, and down just one goal.

The Terrapins and their dynamic offense squashed any hope of a stunning upset, though, with an outburst to open the second half that foreshadowed a similar outburst against the Eagles in the National Championship just two months later.

Amid the first seven minutes of the second half, Maryland rattled off six unanswered goals to take a 14-7 lead. Apuzzo—who also scored four times for the Eagles—halted the run with an unassisted score, but BC never got closer than five goals the rest of the way, and left Maryland on the wrong end of a 21-13 scoreline.