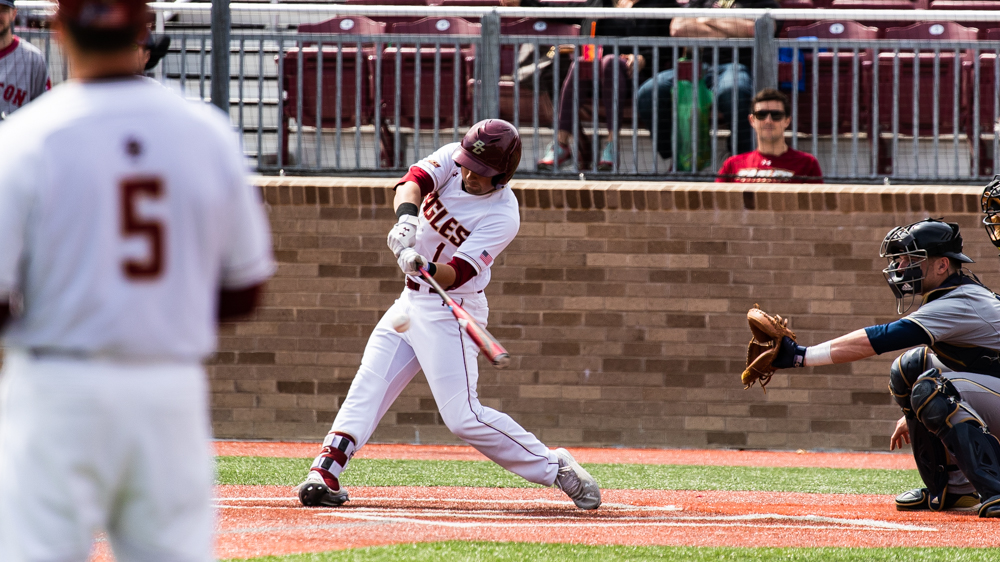 A day after Boston College baseball right-hander Dan Metzdorf was selected in the fifth round of the MLB Draft as the highest pick in three years for the program, two more Eagles joined him on the final day. Third baseman Jake Alu was drafted by the Washington Nationals in the 24th round, then right-hander Matt Gill followed in the 27th round when he was picked by the Cincinnati Reds.

The three selections extended a program streak to five straight years with at least three players drafted, bringing the total to 19 over that span. It’s an impressive run under head coach Mike Gambino, as BC managed just three total selections in the three years prior to beginning the stretch.

Alu was drafted by the Nationals after an All-ACC Third Team season, one in which he rebounded to his sophomore year levels. After hitting just .216 as a junior, Alu bounced back and hit .343 in a career-high 58 games, slugging 18 doubles and driving in 40 runs while swiping 11 bases.

A three-year starter, Alu finished his career with a .302/.402/.369 slash line and worked his way into the Eagles’ record books. His 81 hits as a senior were the third-most by a player in a single season and his 18 doubles are tied for ninth. The third basemen also became the first BC player to be drafted by Washington, and he’ll likely start his professional career with the team’s rookie league affiliate, the Gulf Coast League Nationals.

Three rounds later, Gill was snagged by the Reds, joining an organization that took fellow alum Jesse Adams back in 2016. As a junior, Gill has the option to return to school or sign, but it’d make sense for him to make the move to professional ball. Gill had a tumultuous junior year, starting in the weekend rotation before being moved to the bullpen after early struggles and largely thriving in a relief role.

He made nine starts and 20 relief appearances for Gambino, and the differences between the two were apparent. As a starter—with his last start coming on April 21 after several relief appearances—he threw 36 innings and coughed up 28 earned runs, good for a 7.00 ERA. In those outings, he managed just 15 strikeouts while walking 12.

In a closer role, though, save for a tough five-run outing against Notre Dame, he was more consistent, accumulating six saves and lowering his ERA to just over five. Gill’s command struggles remained, striking out 20 with 16 walks, but he showed flashes of pro potential and the Reds noticed. He has a projectable reliever frame, standing an imposing 6-foot-5 and weighing in at 240 pounds.

The duo rounded out a successful season for the Eagles, as they won 31 games—their second-highest win total of the decade—and made a run to the ACC semifinals. Alu and Metzdorf were a part of the first senior class to reach the the ACC postseason three times, while also becoming only the second class in program history to play postseason baseball. The stretch of three selections will likely continue next year, as the likes of Brian Dempsey, Jack Cunningham, and Chris Galland will all be eligible.