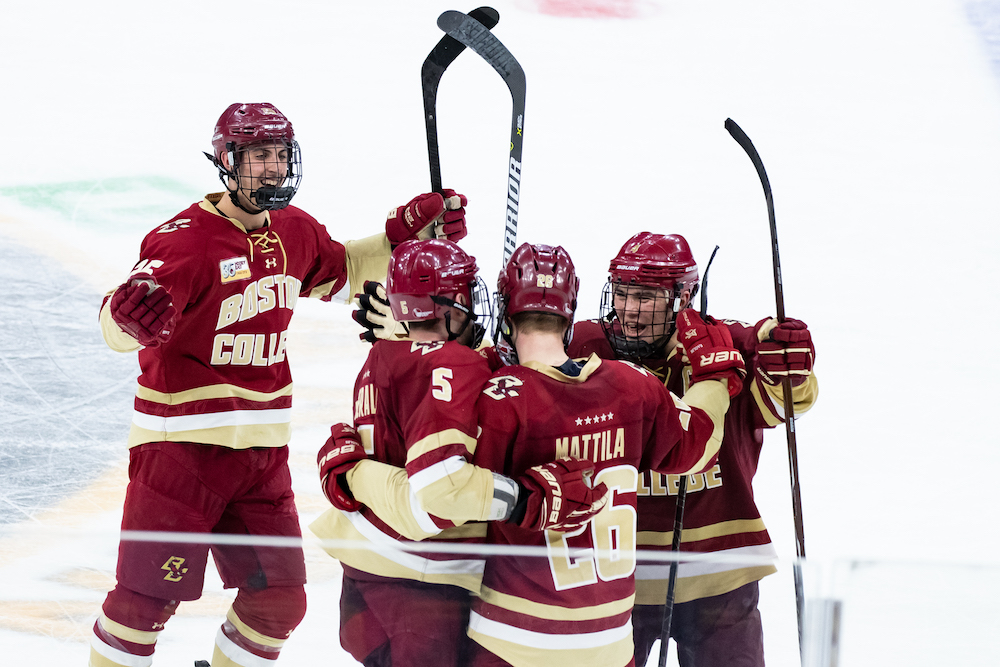 Last season, Boston College men’s hockey suffered through a 14-win season, the lowest win total in a year since Jerry York took the reigns of the program in the 1994-95 season. Still, that’s not to say that the 2018-19 campaign wasn’t without excitement. The Eagles made a surprising push in the Hockey East tournament as the conference’s No. 7 seed, knocking off No. 2 Providence and No. 1 Massachusetts before dropping a 3-2 heartbreaker to Northeastern in a Hockey East final that would’ve punched their ticket to the NCAA Tournament as an auto-bid.

Hopes are high around BC that the program won’t finish six games under .500 again. While several departures will be tough to replace—Oliver Wahlstrom, Casey Fitzgerald, Joe Woll, and Michael Kim are all gone—the Eagles have one of the nation’s best incoming recruiting classes and plenty of returning talent. All-Hockey East First Team selection David Cotton is back, as are Logan Hutsko, the Mattila brothers, and Graham McPhee. Incoming recruits include highly regarded prospects such as Matthew Boldy, Alex Newhook, and Spencer Knight.

A talented—and older—group will have its hands full with a difficult schedule, to no surprise. On Monday afternoon, BC announced its 2018-19 schedule, which features the likes of NCAA Tournament teams Denver, Harvard, Notre Dame, and the usual tough stretches of conference play.

→ Last season, the Eagles opened with a two-game road swing against the Badgers. Suffice to say, it didn’t go as planned. Wisconsin came out swinging and scored 10 goals in two games, blanking BC, 3-0, in the opener before winning a 7-5 slugfest. The Eagles will come in with a chip on their shoulder and likely try to avenge last year’s struggles.

→ Last year, the Pioneers knocked off Ohio State and America International to make a run to the Frozen Four. They fell to Massachusetts, but it was yet another successful season from Denver, which has made the Frozen Four in three of the last four seasons. BC will look to avenge a painful 6-1 loss two years ago as it heads to Colorado for a two-game series.

→ The first conference home-and-home series of the year comes against Connecticut, a team that the Eagles had no problems with in 2018-19. BC swept the three-game series in a largely comfortable fashion, winning 4-0, 3-2, and 5-2.

→ BC snapped a prolonged non-conference losing streak against the Crimson in the first round of last year’s Beanpot, slipping by Harvard, 2-1. It was an impressive win as the Crimson went on to earn an at-large bid to the NCAA Tournament, where they were promptly blanked by UMass in a 4-0 setback. Still, Harvard has made the postseason in four of the last five years.

→ The final two games before Winter Break come against rival Notre Dame, a team that the Eagles hold a slim 22-20-2 record against historically. BC was blanked by the Irish, 4-0, in December last year—Notre Dame went on to reach the regional finals as the Big Ten Tournament champion—and will seek to avoid squandering the all-time series advantage in a home-and-home series.

→ The Eagles meet their longtime rival in the third week of January for the first of three matchups during the course of the season. BU has a much-hyped recruiting class—which will be much-needed after the usual roster turnover—that features Alex Vlasic, a likely first round defenseman, and Trevor Zegras, a two-way forward who slots in the top-15 picks.

→ The rotation of the matchups lines up the rivals for a meeting with a spot in the Beanpot final on the line. It’ll surely be a dramatic affair, with the two both trying to bounce back from setbacks to Northeastern. BU lost in the 2018 final, BC lost in last season’s, and their 50 combined titles make for quite the opening round draw.

→ Last year, there was plenty of dramatics when Northeastern and BC met, whether it was the Beanpot final in mid-February, a two-game series in March, or the Hockey East Championship in what was the Eagles’ final game of the year. The four matchups was an impressive number, and the Huskies came away with a 3-1 edge, winning the Beanpot and conference tournament against BC. This home-and-home will be their first time meeting in 2018-19, unless both win their Beanpot first round games and meet on Feb. 10 at TD Garden.