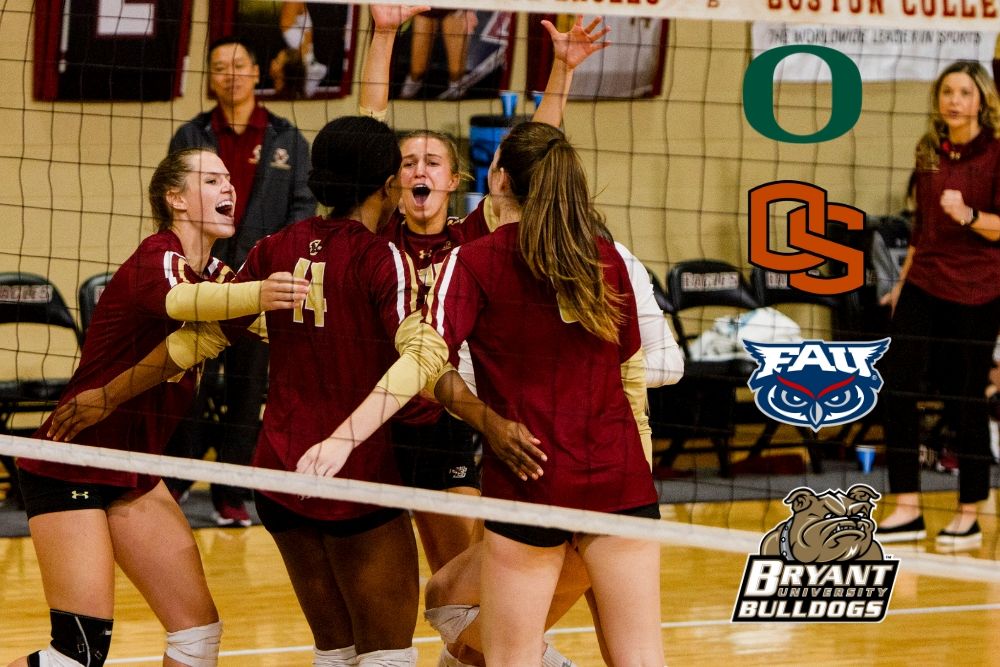 It’s been a little over a month since Jason Kennedy and Boston College volleyball released its 2019 schedule, but seeing as Kennedy was the recent recipient of The Heights Coach of the Year award, it is a fitting time to take a look his team’s upcoming schedule. The Eagles announced their slate of games on May 15, and it includes a pair of Pac-12 opponents, four different mini tournaments, and five weeks on the road to start the season.

Here’s what to look out for when BC returns to campus in the fall after a successful .500 year with a talented head coach at the helm. The Eagles have plenty of hope that they’ll take another step forward, as they welcome in a recruiting class that earned honorable mention honors from PrepVolleyball.

→ After an exhibition match with Northeastern at home, Kennedy takes his team on a West Coast trip, sure to remind him of his days with Southern California. Oregon State managed just 11 wins last season, struggling mightily, but the other two teams should pose much bigger threats. UCI finished third in the Big West, while Oregon finished fourth in the loaded Pac-12 and made a run to the NCAA regional finals.

→ The tough field of the Oregon Classic is alleviated by the Eagles’ second four-team challenge of the year, which features three programs that finished outside of the top 145 teams by RPI in 2017-18. Host UConn is the best of the bunch, but it went just 8-8 at home last season.

→ A third straight weekend of traveling sees BC end up in Boca Raton, playing at an arena that was notoriously unkind to visiting teams last year. FAU, on its way to a 21-win campaign, was a perfect 14-0 at home. That impressive record will be tough for the Eagles in their second game of the weekend, but Bethune-Cookman (277th in RPI) and Southern Utah (281st) are coming off of shaky seasons.

→ After a breather against nearby Harvard—which is no slouch in the semi-rivalry game—the Eagles hit the road again for three games in Rhode Island. The host Rams went just 9-17 last season and had a hard time putting anything together on the road, but they were .500 at home. Bryant, who BC opens the weekend against, reached the NCAA Tournament last year as the NEC’s auto-bid, but the Bulldogs were swept in straight sets in the first round.

→ Just like last season, the Eagles will open conference play against the Tigers. The two teams split their matchups last season, with BC sweeping at home before dropping a five-set thriller in Clemson—a loss that spoiled a chance at a winning season. There’ll be plenty to play for when these two meet and attempt to get the ACC slate started on a good note.

→ The first home game of the season for Kennedy’s side doesn’t come until Oct. 4, which is remarkably late. They’ll welcome in a Duke team that earned an at-large bid to the NCAA Tournament in 2018 after going 16-11—with one of those wins a comfortable 3-0 sweep of BC at the end of September.

→ By RPI, the Eagles won’t face a better team from last year than the Panthers. Pittsburgh finished seventh, going 29-1 and earning the 12th overall seed in the NCAA Tournament. It was surprisingly bounced in the second round by an upstart Michigan side, but the Panthers should be right back among the nation’s elite this season. They swept BC in straight sets last year.

→ UNC was one of the five conference opponents that the Eagles defeated last year, and this matchup marks the end of a tough four-game road trip. BC plays the Tar Heels after matching up with FSU, Miami, and North Carolina State—all teams that beat the Eagles in 2018 and finished with .500 or better records in conference play.

→ The third match of a four-game homestand comes against the Orange, a nearby rival of sorts. Syracuse has taken the last three matches with BC and boasts a comfortable 20-7 record in the historic rivalry. If last year’s matchup was any indication, though, the Eagles are closing the gap with their New York foes: BC forced a fourth set and lost the first two of the match by a combined six points.

→ The Eagles play UVA twice, the second time on the road. The Cavaliers were the worst team in the conference last season, going just 4-14 and losing three straight to end the season. One of those losses came at the hands of BC, which won in straight sets but had to battle with wins of 25-22, 25-20, and 28-26.

→ The final regular season home game for six noteworthy seniors comes against the Wolfpack, who the Eagles also play earlier in the year at the end of October. BC graduates key pieces, such as Jane DeJarld (team leader in assists), Jill Strockis (led the team in digs and service aces), Cat Balido (second in kills), and Makenzie Morrison (second in digs).

Featured Image by Tiger Tao / For The Heights