Ramirez: What Carrie Bradshaw Didn’t Mention About the City

I’ve been known to be a Sex and the City fanatic, so much so that I wrote a column earlier this year that had no central message other than “I really like Sex and the City.”

Failed journalistic endeavors aside, living in New York for the past few weeks has once again stirred up my incessant urge to derive deeper meaning from my all-time favorite show. But mimicking the fabulous habits of my favorite Manhattanite (effortlessly portrayed by the equally iconic Sarah Jessica Parker) has proved difficult at best.

Here are the things Carrie Bradshaw didn’t warn me about before I became one of those New York 20-somethings:

Duane Reade: Where else can you spend $30 on shampoo and $5 on rosé? Definitely Walgreens, but there’s something special about New York having its own brand of convenience store.

The price of a cosmopolitan: Carrie’s drink of choice can easily run you a cool $20 at swanky Manhattan bars and restaurants.

Trader Joe’s: Carrie Bradshaw famously avoided the aggravation of moms with strollers and, worse, grandmas with shopping carts by eating out and using her oven for storage. If you’re on an intern salary and can’t eat out for every meal, however, TJ’s prices will do wonders for your Cosmopolitan budget.

The contents of a Caribbean Manhattan: Bourbon and bitters? Not my favorite combination.

To cancel my New Yorker print trial before it automatically renewed for the price of $119: Given her Manolo Blanik collection, $119 is likely just Chanel clutch change to the impossibly affluent columnist. Interns don’t have the same luxury.

The false security of carrying a New Yorker tote: What’s the point of attempting to camouflage yourself in the concrete jungle if you’re bound to slip on the sewer drain in the mildest of summer rains?

Rent: This has definitely been pointed out before, but there is simply no way a journalist could afford Carrie’s Midtown apartment with a magnificent walk-in closet, at least not without a roommate.

The boring guy: Liberal arts degrees, and I can’t stress this enough, do so much more for a person than you could imagine. Aiden and Big would never let a conversation wane the way my  business majorTinder dates do.

How locks work: I called my grandmother crying on my first day living in New York because I couldn’t get into my apartment. Turns out you have to push the key as you turn.

Juuls: A fashion favorite of frat boys and former addicts—I guess we could probably just categorize frat boys as future addicts—alike. Although Carrie didn’t have the choice of electronic cigarettes in the ’90s, I’d like to think she’d still go for the rugged look of analog Juuls (also known as cigarettes) today.

The negative health impacts of frequent nicotine use: There is also that.

Brooklyn: I don’t think Carrie ever went to Brooklyn. Neither have I.

No bullshit coffee: I’m nearly certain the baristas at various coffee shops around the city have been conspiring to unionize after I’ve wasted seconds of their time asking for flavor shots that they do not have. Plain latte it is.

Working 9 to 5: And then having to cook dinner for yourself after? Seems like they’re asking for a lot here.

That you don’t have to scream taxi when you hail a taxi: In fact, it would be weird if you did.

The unbearable wet heat of the Subway platform: The actual weather above ground seems to have little impact on this brutal phenomenon. No wonder Carrie hailed all those cabs.

The exception to the rule: Although Carrie’s run-ins with the New Yorker types were pretty brash, I somehow managed to come across New Yorkers who will help you carry your excess baggage through Penn Station and pick up your AirPods before they fall to their untimely  mid-commute deaths in the sewer drain. 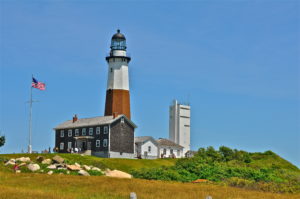