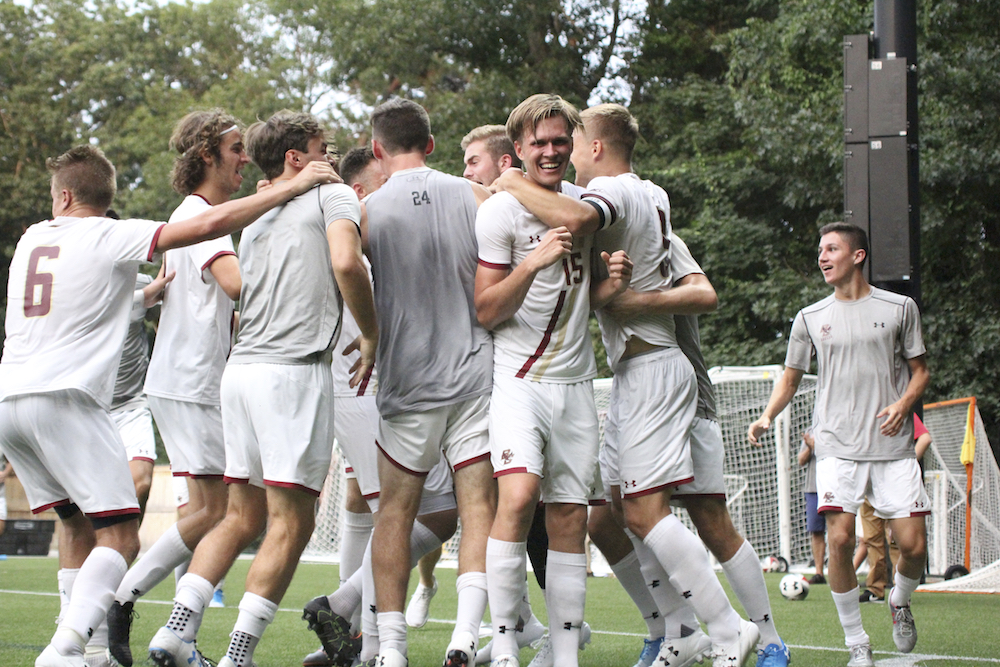 Last season, Boston College men’s soccer went 4-8-4 and was bounced in the first round of the ACC Tournament by No. 24 North Carolina State. Look closer, though, and you see a story of failing by the slimmest of margins. The Eagles started the year unbeaten through five matches, but then eventually went on to lose six one-goal games, all against ranked opponents.

A lack of balance was a large problem—BC finished last in the conference with 19 goals, too few to back up the ACC’s worst defensive unit by goals against average. Still, the year wasn’t without positives, notably the emergence of Kristofer Konradsson as an All-ACC Freshman selection and a strong core of contributors. Losing Simon Enstrom, the team captain who led the team in basically every stat you can pick, and several other seniors will hurt, but the Eagles seem poised to take a step forward.

On Thursday afternoon, BC officially released its 2019 schedule.

—> The first road game of the season features a familiar foe in the Terriers, who battled BC to a 3-3 draw in double overtime last August. BU is coming off of a shaky season overall, though, as it went just 5-10-4 and strung together consecutive wins just once.

—> One of the toughest losses for BC last season came at the hands of the Rams. In the second-to-last game of the regular season, Rhode Island took a lead in the 53rd minute only to see Enstrom answer three minutes later. But the Rams would score in the 80th minute and hand the Eagles another narrow defeat. Rhode Island finished as Atlantic 10 champions but lost to Connecticut in the first round of the NCAAs.

—> Conference play begins with a rematch of last year’s ACC Tournament first round matchup, which the Wolfpack took by a 3-1 margin. That avenged N.C. State’s loss to the Eagles earlier in the year, when the then-No. 17 Wolfpack came to Newton in early October and was sunk by an Enstrom goal.

—> The Hokies were the second-highest scoring team in the ACC last year, averaging nearly two goals per game, and they rode that to an 11-7-3 record and an at-large bid to the NCAA Tournament. VTech, which finished ninth in RPI, was the No. 12 overall seed and reached the third round before falling to James Madison.

—> The Demon Deacons finished the regular season as the No. 9 team in the polls, but when they hosted the Eagles in October of last year, Wake Forest was all the way up to No. 2. BC put up a valiant fight, equalizing at one apiece in the 55th minute, but eventually lost on a 75th-minute game winner. Wake Forest was ultimately upset by Akron in the third round despite being the top overall seed.

—> The Cavaliers preached defense in 2018, and it paid off. UVA held opponents to just .71 goals per game and it lifted the team to 10 wins and the No. 10 overall seed in the NCAA Tournament. The Cavaliers reached the third round, but were knocked off in overtime by No. 7 Notre Dame. The teams met back in the 2017 ACC Championship, where UVA rolled to a 4-0 shutout with every goal coming in the first half.

—> In early September of 2018, BC took a 1-0 lead in the first half against the visiting Tigers. Clemson came roaring back with two goals—the second coming in the 65th minute—but the Eagles didn’t fold. Instead, Enstrom scored two of his own, including a dramatic game-winner in the 89th minute. It was easily the most exciting game of the season for the Eagles, who beat the Tigers for the first time since 2009.

—> The final match of the regular season comes against a nearby rival, which BC battled to a scoreless draw last season. Syracuse was ranked 20th at the time but couldn’t crack the Eagles back line. The Orange went on to lose in the second round of the NCAA Tournament to the same upstart Akron team.