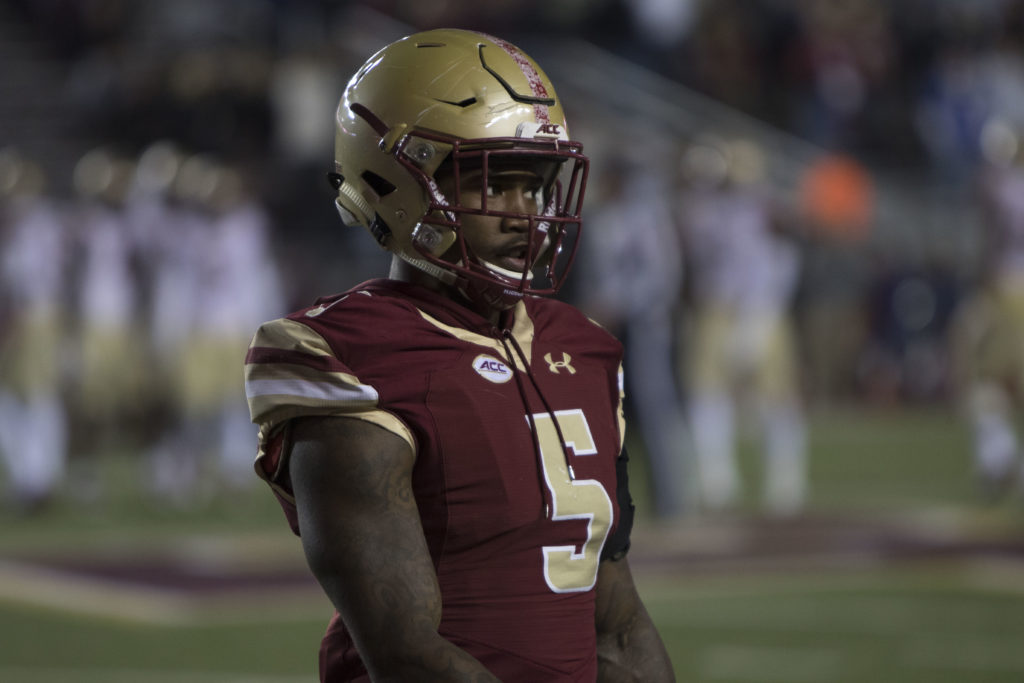 Former Boston College football starting defensive back Kamrin Moore, BC ’18, was suspended by the New York Giants on Monday in connection with his arrest over the weekend in an alleged domestic violence incident.

The Linden, New Jersey Police charged Moore, with third-degree aggravated assault for allegedly stepping on an unnamed woman’s neck before knocking her unconscious with a punch to the face, according to NJ Advance Media, which obtained a criminal complaint and affidavit of probable cause on Monday.

NJ Advance Media reported that, on Thursday night, Moore did not respond to multiple texts from the woman, whom he met in January and was dating—according to the affidavit—leading the woman to drive to Moore’s residence. When she got there, another woman approached her car, and the two women began to fight each other. The report reads that Moore is accused of spectating while the women assaulted each other. That is, until the complainant fell to the ground, at which point he became involved.

Moore then allegedly placed his foot on the complainant’s neck, applying pressure before she rose to her feet, according to the Linden police. She told the police that, once she was up, she started yelling at Moore and proceeded to shove him. He answered with a punch to her face, causing her to lose consciousness, according to the report.

At the time of the incident, police were not called, but the assaulted woman—who reportedly had visible neck and face injuries—filed her complaint with the police department on Saturday night.

The Giants responded on Monday, stating that Moore “has been suspended by the team pending further investigation.”

According to the NFL’s Personal Conduct Policy, domestic violence violations will “subject the offender to a baseline suspension without pay of six games.” A second offense results in a player’s banishment from the league.

Moore played just 10 snaps in two games for the Giants as a rookie in 2018 after being claimed by the organization off waivers one week before the start of the regular season. Prior to Thursday’s incident, he was vying for a roster spot.

Moore was originally drafted by the New Orleans Saints with the 189th overall pick in the sixth round of the 2018 Draft after starting his final three collegiate seasons at cornerback. As a senior, the 5-foot-11 Moore tallied a career-high 50 tackles and nine pass breakups, despite missing the final three games of the year.