Boston College football just lost arguably its most talented class in program history. Of the Eagles’ school-record 13 All-ACC selections, only two, running back A.J. Dillon and center Ben Petrula, are returning to the Heights this season. Four players heard their names called during the NFL Draft, including Chris Lindstrom—BC’s first opening-round pick since 2012—and nine others signed as undrafted free agents.

Head coach Steve Addazio’s team ended up with the 63rd best recruiting class in the nation, ranking eight spots higher than the previous year. Not only that, but it also pulled in a much-needed place kicker on the transfer market. BC will need all the help it can get, as it only returns 53 percent of its 2018 production, clocking in at 110th nationally in SB Nation’s annual returning production rankings—79 spots lower than last year. The Eagles are tied with North Carolina State, but only one other ACC team—Georgia Tech—and six total Power Five programs rank lower than BC.

If you break it down, though, that number is a little misleading. BC’s needs lie on the defensive side of the ball, while the offense could be better than ever. In fact, the Eagles only return 38 percent of their 2018 defensive output (128th in the country)—as opposed to 69 percent of their 2018 offensive production (50th)—and there are only five players on their defense that have started at least one collegiate game.

Strengths and weaknesses in mind, here are the Eagles’ top-five departures and acquisitions:

After Allen finished the 2017 season as one of two defensive linemen in the country to rack up 100 or more tackles, some thought he might go to the NFL a year early. Instead, he stuck around Chestnut Hill and played what, in many ways, was the best season of his career. Often double-teamed, the do-it-all defensive end only tallied 61 tackles in 2018, but he posted a career-best 6.5 sacks, seven passes defended, one interception, and two blocked kicks. Because of his versatility and tenacity, Allen, selected in the third round by the Arizona Cardinals back in April, will be a difference maker at the next level.

It’s going to be weird to watch BC’s offensive line without Lindstrom in the trenches. He started his final 47 games in an Eagles uniform, providing stability to a position group that’s suffered a number of injuries the last couple of years. The right guard earned All-ACC honors in each of his final two seasons, even rounding out his senior year as BC’s top-graded lineman. Once a 260-pound recruit with just two scholarship offers, Lindstrom will now be blocking up front for fellow Eagle Matt Ryan.

Harris might not have climbed NFL draft boards until the Senior Bowl and the NFL Combine, but he was a menace in BC’s secondary for three years. The Suwanee, Ga., native started the final three games of his freshman year before locking down the strong safety position for the remainder of his Eagles tenure. Harris quickly developed a reputation as one of BC’s hardest hitters, wreaking havoc in both the secondary and the backfield. Couple his hard-nosed play style with 4.4 speed, and it’s easy to see why the Lions took him in the third round of the draft.

Like Lindstrom, Sweeney was a mainstay in the Eagles’ offense, starting 47 games at tight end while at BC. Because the Eagles were so run heavy during his underclassmen years and—with Anthony Brown at quarterback—tended to spread the ball through the air, Sweeney’s numbers were never spectacular. That said, when he was targeted, there was a good chance he was coming down with the catch. During his four-year career, the Ramsey, N.J., native recorded 99 receptions, 1,281 yards, and 10 touchdowns. A reliable receiver and a capable blocker, Sweeney became the first BC tight end since Sean Ryan (2004) to be picked in the NFL Draft.

The Eagles ranked 118th in the nation in special teams S&P+ this past season, and if it wasn’t for Walker, they probably would have slid even further down the list. The 6-foot wideout held his own in the slot and on the perimeter, but he made a name for himself as a returner. Walker wrapped up his college career with back-to-back seasons atop the nation’s combined kick return yards chart. In 2019, he finished seventh and 22nd in punt and kick return average, respectively, earning All-ACC Second Team honors in the process.

Over the course of the past five years, BC kickers have converted just 43 of their 64 field goal attempts, in other words 67.2 percent. And the Eagles’ latest place kicker—Colton Lichtenberg—went a mere 4-of-12 from 40 yards out during his BC career. Distance won’t be a problem for Temple transfer Aaron Boumerhi. The former walk-on drilled field goals of 48 and 52 yards with the Owls. While at Temple, Boumerhi connected on 31-of-43 field goal attempts (72.1 percent), along with 59-of-62 extra points. He’s coming off season-ending hip surgery, but the prospect of a kicker with range has to be comforting for Addazio.

As soon as Johnson committed to BC in May 2018, Eagles fans pegged the 6-foot-4, 195-pound signal caller as the quarterback of the future. He’s just the third player, and the first gunslinger, ranked inside ESPN’s Top 300 to commit to BC during Addazio’s seven-year tenure. For the moment, though, Johnson will sit behind Anthony Brown. The strong-armed but lanky pocket passer enrolled in January of this past year and showed signs of both promise and youth—he completed just 2-of-7 passes for 25 yards and took one sack in the Jay McGillis Memorial Spring Game. However, for the first time, Addazio has a four-star QB in his back pocket.

Running back might just be BC’s deepest position. Yet, assuming Dillon leaves for the NFL following this season, Garwo could be in line to jockey with David Bailey for the team’s most carries in 2020. As the Eagles’ only other 2019 four-star recruit, the Fairless Hills, Pa., product arrives on campus with expectations similar to the workhorses at his position. Garwo turned down offers at schools like Wisconsin, Syracuse, and Vanderbilt to play for the Eagles. At 5-foot-10 and approximately 210 pounds, he doesn’t necessarily fit the Dillon-Bailey build, but is shifty in between the tackles and can catch the ball out of the backfield.

BC might be thin on the defensive side of the ball, but it does have some depth at linebacker, with Max Richardson, Isaiah McDuffie, and John Lamot all returning—not to mention a slew of redshirt freshmen, namely Vinny DePalma. Even so, don’t be surprised if you hear Sillah’s name being called this season. Rated the number one outside linebacker in the state of New Jersey by 247Sports, Sillah totaled 52 tackles, 10 sacks, and a fumble recovery as a senior at Mater Dei Prep. He can speed off the edge and get to the quarterback, but has no problem plugging up holes in the second level.

Henderson, Sillah’s high school teammate, might not have to wait that long to crack the defensive line rotation, especially after the departure of both Allen and Wyatt Ray. At 6-foot-5, 290 pounds, the Garden State native recorded 60 tackles, nine sacks, and one forced fumble last year, en route to being named Shore Conference Patriot Division Defensive Player of the Year. Henderson enrolled in January and turned heads in spring ball. And according to Addazio, who commented on the D-Lineman after the Spring Game, “He’ll be playing this year, and we need him.” 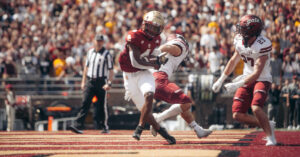