The last time new Boston College football offensive coordinator Mike Bajakian was coaching at the college level, he was with Tennessee back in 2014 overseeing an offense that saw just 13 percent of its receptions come from the tight end position.

Triple that number, and you’ll be just a little bit over the percentage of passes caught by Eagles’ tight ends in 2018 (34.4 percent). Led by Tommy Sweeney, who is catching on with the NFL’s Buffalo Bills, BC had one of the more capable tight end units in the country. The group combined for 825 yards and eight touchdowns, a healthy output on a run-first team.

The difference between the two offenses is easily traceable. In his first college stint, Bajakian—who spoke to reporters on Tuesday afternoon at BC’s media day—described his approach as “an up tempo, no huddle spread scheme, operating from the gun, using four wide receiver sets, [and] spreading the field out laterally.” The Eagles, under since-departed Scott Loeffler, played with speed in 2018 but leaned on bigger packages, making the most of a deep tight end room.

Don’t expect BC to dramatically change its offense in 2019, though. All you need to look at is what Bajakian learned when he leapt up to the professional ranks in 2015. As the Tampa Bay Buccaneers’ quarterbacks coach for four years, Bajakian learned under Dirk Koetter—who was the offensive coordinator in 2015, then the head coach the next three seasons. Tight ends “have thrived” under Koetter, whether it’s Cameron Brate or Austin Seferian-Jenkins the last few years.

“I learned a ton about how to utilize tight ends better in an offensive scheme,” Bajakian said of his time in Florida. “Obviously, we had had some good ones in my past … but when I went to Tampa, and we had guys like Cameron Brate from Harvard and O.J. Howard and various other guys, I thought Coach Koetter did a great job of using those guys.”

Bajakian, while at Tampa Bay, got to thinking of how he would incorporate tight ends more if he returned to the college level. When BC and head coach Steve Addazio came knocking, it was a perfect fit.

“When Coach Addazio and I started talking, he told me about the depth they had at the tight end position prior to me coming here and [how] they utilize them,” he recalled. “I said that was exactly what I wanted to do, and it became an easy decision.”

That bodes well for the Eagles’ tight end room, which took a hit with the departure of Sweeney (32 receptions, 348 yards, three touchdowns) but still has plenty of talent. Two of them—graduate Jake Burt (six receptions, 83 yards, one touchdown) and redshirt sophomore Hunter Long (four receptions, 103 yards, two touchdowns)—were named to the preseason John Mackey Award Watch List, which is given to the country’s top tight end.

Dillon out of the backfield

A recurring theme of talk around star running back A.J. Dillon’s ability is whether or not he can be utilized as a receiving option out of the backfield. Dillon didn’t catch a ball in his freshman season—while racking up 300 carries—and managed just eight in 10 games last season. While a part of that can be chalked up to the Eagles turning to the likes of Travis Levy (19 receptions in 2018) and Jon Hilliman (24 in 2017), if Dillon is looking to further boost his NFL Draft stock and his Heisman chances, displaying pass-catching ability should be high on the to-do list.

Bajakian seems to agree, as he emphatically answered a question about the chance to involve Dillon more in the passing game with a “yes.”

“I think the philosophy is always the more ways you can get your playmakers the ball, [you] find ways to do it,” he said. “A.J. is obviously one of the playmakers. The more different ways we can get him the ball and get him involved, the better.”

Another key component of the Eagles’ offense—starting quarterback Anthony Brown—entered camp looking to improve on consistency. Last season, he started hot with 12 touchdowns and four interceptions in his first five games, helping BC to a 4-1 start. The back half didn’t treat him as kindly: Brown had just eight touchdowns to five interceptions in the last seven games. As managing editor Andy Backstrom pointed out, struggles with consistency were evident on a per-game basis. Against Florida State, Brown started 3-of-10 with two interceptions, but closed the game going 15-of-26 with 285 yards and a touchdown.

Bajakian pointed to accuracy as something Brown has been working on this spring. The redshirt junior completed 55.4 percent of his passes last season, good for 10th out of 13 quarterbacks in the ACC.

“I think more precise ball location can only help in the area of explosiveness, and the phrase we use is, hey, turn those receivers into ball carriers so that they can catch and advance,” he said. “That’s one area that, as I evaluated last year’s video, Anthony, I believe, had completed a higher percentage of passes than he had ever done before in his career, but I thought he could have done a better job of the pinpoint accuracy.” 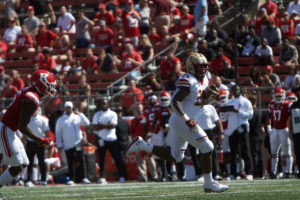 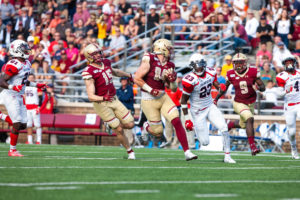 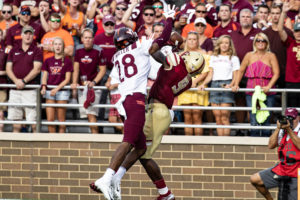