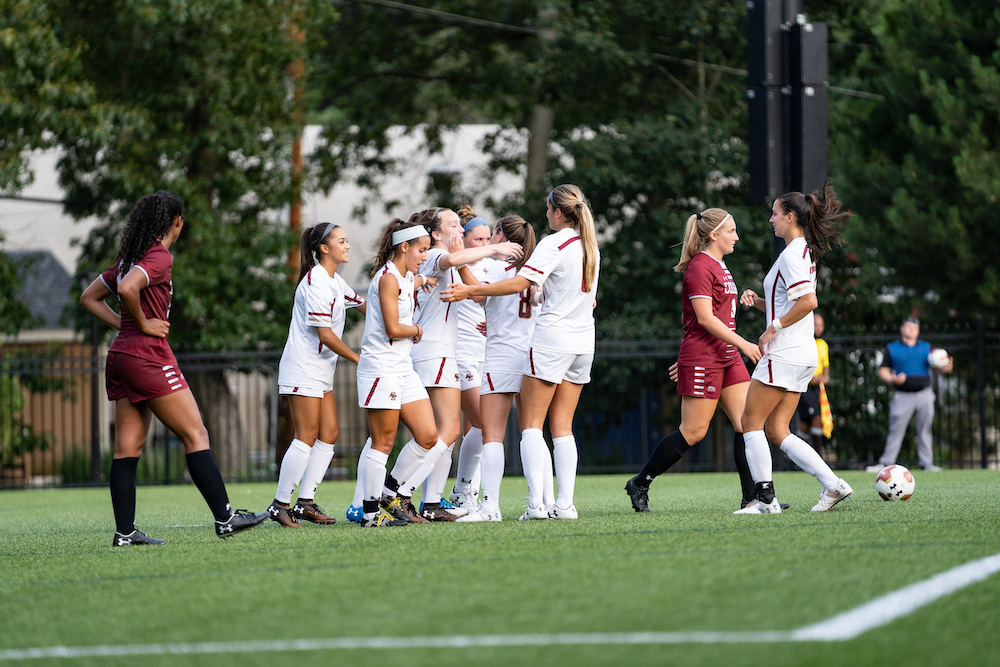 On Monday afternoon, for the first time in 21 seasons, Boston College women’s soccer took the field in the fall under a different coach than Alison Foley. The Eagles faced off against Colgate in a preseason exhibition under the watchful eye of first-year head coach Jason Lowe instead, and he guided BC to a 1-0 victory in the first of two friendly matches.

Freshman Sam Smith, a 2018 High School All-American playing in her first game with the Eagles, came away with the lone goal. Fellow first-year Allie Augur and sophomore Maddie Murphy each played 45 minutes to combine for the shutout, helping BC best a Colgate team that went 11-4-1 a year ago.

Smith, who hails from Hanson, Mass., was recruited by Foley as a player with the versatility to play all three positions. Against the Raiders, she found herself in an opportune attacking position, settled the ball roughly 12 yards out from net, and had a go at net. Her first shot was deflected back to her, but she deftly sliced to the middle of the field and her follow-up effort cleared the netminder and snuck inside the far post.

It wasn’t the only shot of the night from the freshman, who had two other chances—both were denied in a similar fashion by a Colgate defender. Olivia Vaughn, who tallied 10 goals and an assist last season, opened her senior campaign by nearly setting Smith up for a goal with a service and additionally putting a shot on net that required a defender to clear it away at the goal line.

Another quality offensive chance came from Riley Lochhead, who played in 19 games last season but didn’t make a start. Lochhead, who registered three assists in 2018, took a long-range shot that was punched away by the visiting goaltender for a BC corner. Senior Francesca Venzia rounded out the chances, as the senior—who entered having made one start for the Eagles—sent a strong cross into the box and also nearly caught up with a through ball off the foot of classmate Gaby Carreiro.

Defensively, BC was nothing short of impressive—a fact that should surprise few. The Eagles entered this season returning the bulk of their defense (save for Elysa Virella) from last season. Add in a capable recruiting class, and Monday’s shutout proved that Lowe has plenty of talent to build on. The freshman duo of Sydney Moore and Michela Agresti both made strong defensive plays in the win, while Augur and Murphy held down the net.

It was a strong start to Lowe’s career at the Heights, especially as the Raiders—even though it was a preseason match—entered as a close second to Boston University as the preseason pick to win the Patriot League. BC has a different look than last season, as the longtime goaltender, coach, and top player have all moved on, but that didn’t show on Monday in the team’s first tuneup.