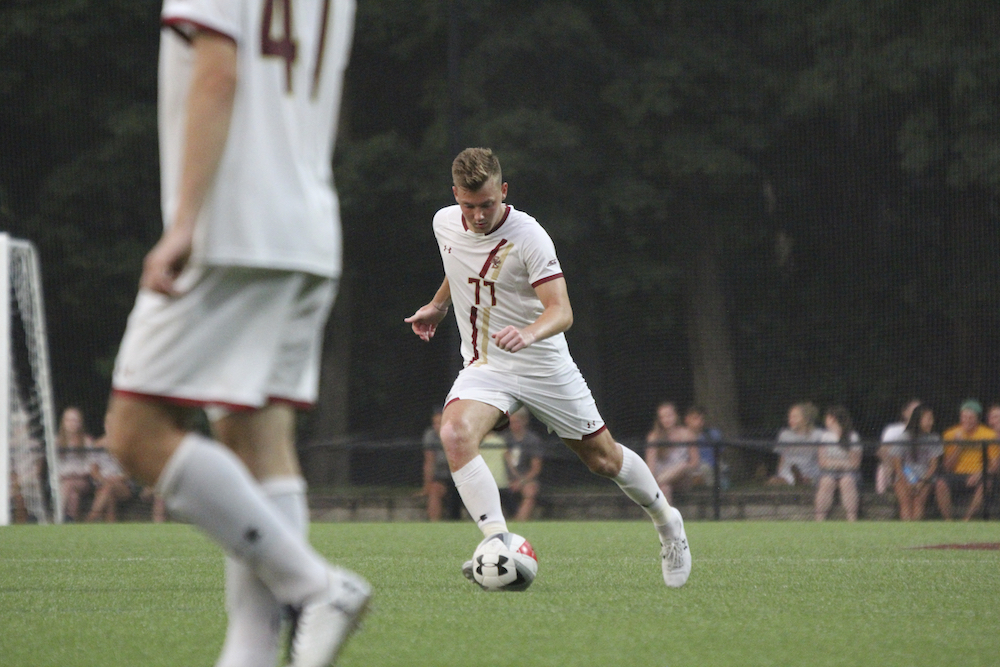 This year, the Eagles might lean on fresh legs once again. That much was evident on Tuesday night against Providence in the team’s first exhibition of the fall. While established midfielder Joe Kellett scored the first goal, freshman Mike Suski and sophomore Alex Mieles—who didn’t play in a match last season—scored the next two in a 3-1 win. It was a victory that also provided the first glimpse at Ed Kelly’s lineup, which looked strong in the first of two preseason matches.

Another first-year, Giacomo Piccardo, started the match in net and played 75 minutes, allowing a lone goal on a penalty kick, and nine underclassmen in total saw the pitch for BC. That group included freshman Amos Shapiro-Thompson, who started up top and is a promising prospect, having spent time with the U.S. U-15 National Team.

That’s not to say that Kelly and the Eagles won’t lean on experience, of which they have a healthy amount. Losing leading scorer Simon Enstrom (nine goals, one assist) is a tough pill to swallow, but BC returned a good chunk of last year’s roster.

The back line against the Friars was David Longo, Tyshawn Rose, Heidar Aegisson, and Gregorio Barilla. Longo arrived last fall from Florida International and immediately established himself as a central piece, starting all 16 games. Rose led all freshmen last season in field minutes, starting 14 games, so he’s no stranger to the D-I level. Aegisson, the team’s captain, was sidelined for the first six games of last year with an injury, but started the final 10 and will be looking to return to his 2017 level when he registered six assists. Barilla is an intriguing piece, as the 6-foot-2 product of Parma, Italy, didn’t play in a game last year.

The midfield—where Aegisson found himself playing in 2017—is arguably the deepest position group for BC. Kellett, a transfer from Massachusetts Lowell last season, quickly became a standout on the Heights and led the team in minutes played. Against Providence, he was joined by Konradsson as well as Jesus Sahagun and Lasse Lehmann. Sahagun appeared in 12 games last year as a freshman, while Lehmann has been a staple the last few years, having played in 49 games and started 39.

The top two of the 4-4-2 formation was Shapiro-Thompson alongside Adam French, a senior. French didn’t play in a game last season and was subbed with five minutes to go in the half for Suski, who entered BC as a two-time Gatorade Player of the Year in Connecticut. He looked the part of a capable attacking threat against the Friars, scoring his first goal as a member of the Eagles. Mieles was the other bench player to see time, and he made the most of it, finishing off an excellent through ball from Lehmann.

All in all, it was a successful opener to the fall campaign for BC. Providence came in on the heels of a strong 2018 campaign, going 10-7-2 last season. The team is looking to shake off last  year’s 4-8-4 record, but the coaches throughout the conference don’t have a lot of confidence in them. In the ACC Preseason Poll, the Eagles were picked to finish sixth in the Atlantic Division and registered the second-fewest votes total.

The Eagles continue their preseason tour with a road trip to New Hampshire, as they take on the Wildcats on Saturday. It’ll be interesting to see if Kelly turns to other options on his roster. BC didn’t play Callum Johnson, a tenured midfielder, nor did the team play new transfer Wil Jacques from ACC rival Duke.