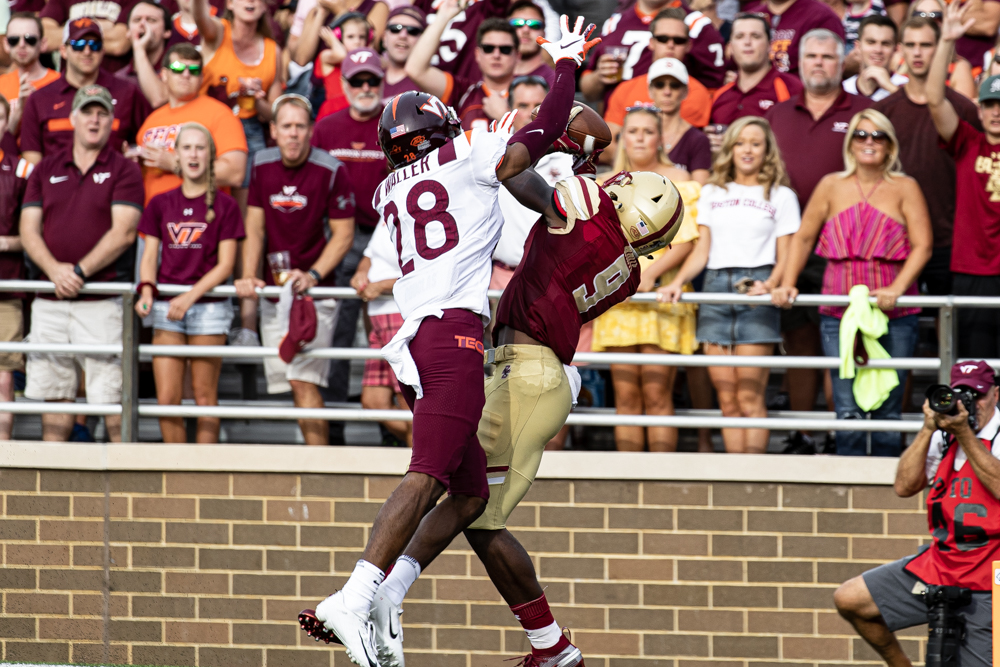 The last time Boston College football started the season with a game against an ACC opponent,  the Eagles didn’t have a happy ending. BC lost a heartbreaker to Georgia Tech, 17-14, in Dublin, Ireland to start the 2016 season. This year, however, with its season opener against Virginia Tech, the story was different.

The Eagles scored 28 points in the first half, forced five turnovers, and were able to execute when it really mattered, holding off a late comeback to beat Virginia Tech, 35-28. Here are some thoughts from a seesaw season opener.

Credit to the Offensive Line

BC lost three multi-year starters on the offensive line after 2018 in Aaron Monteiro, Chris Lindstrom, and Jon Baker. Any questions about how the new look unit would perform in 2019 were quickly answered, though, against the Hokies’ defense. Anthony Brown was rarely under pressure, and was only sacked once. On most of his dropbacks, in fact, he had all day to throw, and was able to progress to his second and even third read without issue.

But there were slight struggles run blocking, as Virginia Tech often loaded the box in an attempt to mitigate the impact of the Eagles’ bruising running back room. BC was averaging under four yards a carry at halftime, but when it really mattered, the Eagles were able to get the ground game going. On a 10-play, 56 yard drive that ended with BC’s final score, the Eagles ran the ball nine times in a row, and capped the sequence with a one-yard touchdown plunge from David Bailey. Then, on 3rd-and-9 with 2:02 remaining and the game on the line, A.J. Dillon rumbled over the left side for 11 yards to seal a winning start to the season for BC.

Heading out of training camp, there was buzz that Anthony Brown had taken the next step under new offensive coordinator Mike Bajakian and was ready to be a much more dynamic passer. In the first half, he certainly lived up to the hype. Brown completed 12-of-20 passes for 258 yards and two touchdowns, and tacked on a 28-yard rushing touchdown for good measure. He displayed impressive touch on many throws, none more so than a 56-yard bomb to Kobay White while on the run to the right. He also had perfect ball placement on both of his touchdowns, first on a go route to Zay Flowers, then on an impeccable back-shoulder fade to Kobay White.

Brown certainly slowed down in the second half, completing just 3-of-6 throws for 17 yards, but looked in command of the offense the whole way. After the game, Eagles head coach Steve Addazio made sure to mention how steady and poised the redshirt junior was in the huddle, even when BC went three-and-out three times in a row to open the second half. That kind of leadership will be needed throughout the season if the Eagles are to continue to have a potent offense.

BC led by two touchdowns at halftime, but arguably could have been ahead by much more. First, after Brown’s 56-yard completion to White set up the Eagles with first and 10 at the Hokie 14-yard line, a pair of pre-snap penalties lost BC 10 yards. The Eagles weren’t able to convert the ensuing 3rd-and-20, and Aaron Boumerhi then pushed a 38-yard field goal that would have extended BC’s lead to 10-0 wide right.

The next possession, after Virginia Tech tied the game at 7-7, a 58-yard pass from Brown to Flowers once again gave the Eagles a prime opportunity. But with a 1st-and-10 on the Hokies’ 25-yard line, Addazio and Bajakian elected to give A.J. Dillon four consecutive carries, which didn’t net 10 yards. BC turned the ball over on downs, leaving two straight red zone possessions with zero total points.

The aforementioned missed opportunities could have lost the Eagles the game, but they were able to make up for it by forcing five Virginia Tech turnovers, often at opportune moments. First, after BC knotted the game at 14 in the second quarter, defensive coordinator Bill Sheridan called a cornerback blitz. Tate Haynes found a big hole to run through and leveled Hokies quarterback Ryan Willis, forcing a fumble that was recovered by Marcus Valdez. The Eagles scored three plays later, and never trailed again.

Three minutes after that, BC was forced to punt, but the ball bounced off Hezekiah Grimsley’s hands, and into the chest of a covering Nolan Borgersen. The Eagles would again convert that turnover into seven points. BC also intercepted Willis in the end zone twice, courtesy of Joe Sparacio and an acrobatic play from Brandon Sebastian, but it was the fifth and final turnover that was perhaps most important.

The Hokies cut the lead to 28-21, and had the ball to start the fourth quarter. Momentum seemed to be on their side, until Willis tried to dish out a screen pass to his running back, Deshawn McClease. What he didn’t account for, however, was the athleticism of Tanner Karafa. The newly-named team captain stretched to his left, diving and getting his left hand on the ball before cradling it and falling to the ground to secure an acrobatic interception. The play seemed to turn the momentum, and two drives later the Eagles embarked on the 56-yard march that put them back up by two scores.

“New Cars in the Garage”

“It’s always nice adding new cars to the garage,” Anthony Brown remarked postgame. The quip was in response to a question about Flowers, an explosive true freshman wide receiver that impressed in the first game of his college career. On BC’s second possession of the game, the Fort Lauderdale, Fla., native got the ball on a jet sweep and exploded around the edge for 16 yards. Four plays later, Flowers beat Virginia Tech cornerback Jovonn Quillen on a go-route, and hauled in a 33-yard touchdown for the first score of the game. He also got free for a 58-yard reception in the second quarter, finishing the game with two catches for 91 yards and a touchdown. In Flowers, the Eagles seem to have an explosive playmaker that has the potential to stretch the field on a regular basis, and provide White with a dynamic partner in crime.

It’s a given that for BC’s offense to remain explosive this season, Dillon has to remain healthy. It seems that Addazio, who is surely cognizant of the ankle injury that bothered the junior last season and how it limited Dillon’s powerful running, agrees. With the talented stable of backs that the Eagles have, including Travis Levy and Bailey, questions surrounded how much either of them would be used in relief of Dillon entering the season. The answer, it appears, is a significant amount. Dillon had 23 carries Saturday, but also didn’t see the field on some series. That left room for Bailey to earn 12 touches of his own, including a one-yard touchdown plunge. A rotation like that is surely beneficial for BC moving forward and could help prevent the ailments that plagued Dillon last season.

Teaching Moments for the Secondary

The Eagles’ secondary certainly stepped up against the Hokies, playing its part in forcing Willis into three interceptions and a fumble, but there were also some teaching moments. On Virginia Tech’s first touchdown, a 55-yard strike from Willis to Grimsley, Haynes was beaten and Borgersen failed to provide help over the top, resulting in both players chasing Grimsley as he trotted into the end zone. In the third quarter, Willis somehow converted a 3rd-and-21 with a 24-yard completion, again to Grimsley, although a lack of pressure from the defensive line gave him all the time he wanted to throw. Willis finished 29-of-47 for 344 yards, and certainly found his fair share of open throws, though the Eagles’ secondary flashed some talent and resilience against an experienced quarterback, which certainly bodes well for the unit moving forward.