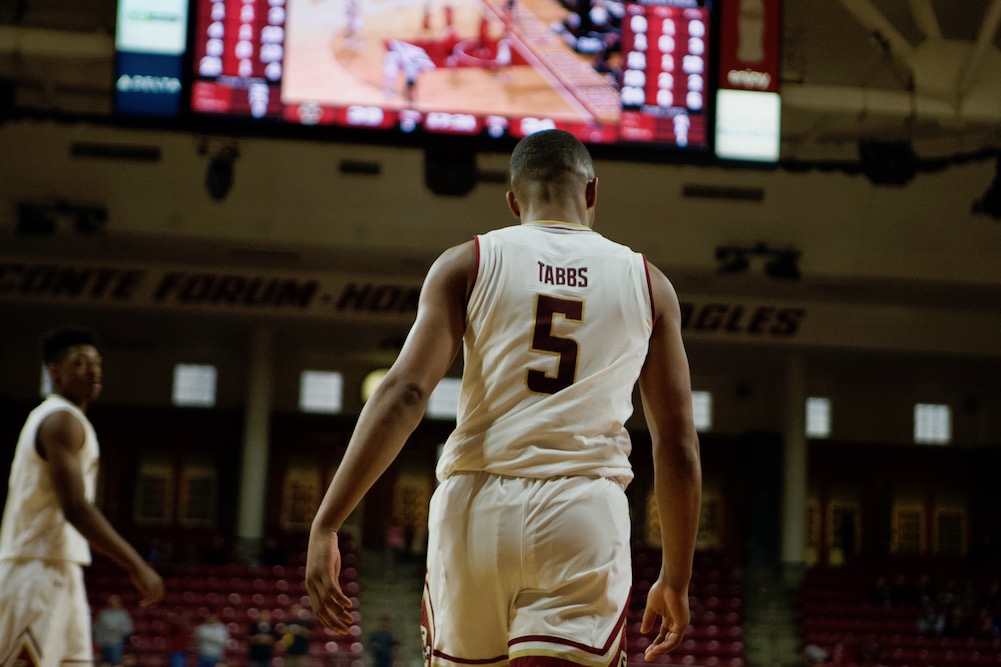 Rumors first surfaced on Boston College men’s basketball message boards back in July, but now the news is official. The team announced on Wednesday that sophomore guard Wynston Tabbs will undergo left knee surgery on Sept. 17 and miss the entire 2019-20 season.

“While I won’t be able to play this season, I know that it is a temporary setback and I will be back stronger than ever before,” Tabbs told BCEagles.com. “I want to thank my family, the Boston College basketball program, and all our fans for their continued support. I’ve overcome obstacles before in my life and will work tirelessly to overcome this one. I am built for this.”

Last year, Tabbs appeared in 15 games, making 14 starts in the process. Prior to the start of the season, classmate Jairus Hamilton, the Eagles’ first ESPN 100 recruit since Craig Smith, was the talk of the town. But Hamilton didn’t get the nod in BC’s season-opening starting five—Tabbs did. The 6-foot-2 guard immediately proved his worth, racking up 16 points on 6-of-11 shooting in his collegiate debut against Milwaukee. It was just the start of an exciting first half to the 2018-19 campaign.

In the five games following the Fort Myers Tip-Off Tournament, Tabbs averaged 20.2 points per game, earning ACC Rookie of the Week honors as a result. It was during that stretch that the then-freshman recorded a season-high 28 points, along with seven rebounds, five assists, and three steals in a win over Sacred Heart. To put that in perspective, since 1996-97, an ACC player has logged that kind of stat line just 12 times.

But everything started to go downhill when Tabbs suffered a left knee injury against Hartford. The Eagles ended up losing to the Hawks in overtime and then dropped the next two games before Tabbs suited up for his final outing of the season: an 87-82 upset victory over then-No. 11 Florida State. The Leonardtown, Md., native tallied 12 points, five rebounds, and three assists in the win. Most importantly, though, he knocked down the dagger—a 3-pointer that put the game out of reach and secured BC’s 10-point, second-half comeback.

However, the breakout guard still wasn’t healthy, and Christian didn’t want to take any risks. Tabbs was ultimately shut down for the season with his left knee injury, throwing a wrench in his freshman season, as well as the entire Eagles 2018-19 campaign. After starting 10-7, BC lost 10 of its last 14 games, including an embarrassing defeat to conference bottom dweller Pittsburgh in the first round of the ACC Tournament. As the Eagles slid, so did their best player.

In BC’s 16 games without Tabbs on the court, Ky Bowman shot just 35.1 percent from the field—11.1 percent worse than his 46.2 percent Tabbs-inclusive clip. Without a secondary ball handler like Tabbs, Bowman was forced to create on his own, often beyond the 3-point line. Tabbs’ misfortune was infectious, too, as the Eagles were bitten badly by the injury bug last year. Jordan Chatman and Steffon Mitchell both missed four contests, and Nik Popovic also sat out three games. All in all, BC walked out 13 different starting lineups over the course of the season, including four in the span of six games.

Tabbs was expected to return to the team for the 2019-20 season, given that he was sidelined in January. CBS Sports college basketball insider Jon Rothstein even tabbed the sophomore as one of his 10 breakout ACC candidates in late July. How exactly Tabbs’ left knee injury spiraled into a season-and-a-half absence is currently unknown.

Head coach Jim Christian has some options, but, at the moment, a potential starting five could look something like this: Derryck Thornton, Jared Hamilton, Jay Heath, Mitchell, and Popovic.

Many believed that Tabbs was going to replace Bowman as the face of the program in 2019-20. The guard still has a chance to make that happen—but not this year.