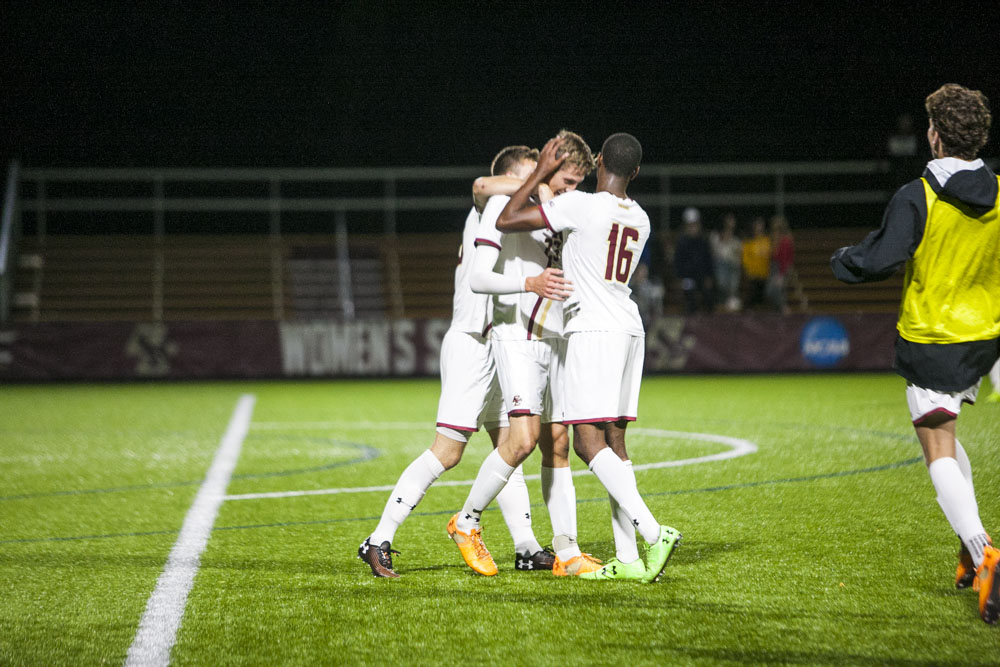 With just four minutes left in regulation, Boston College men’s soccer found itself in a 1-1 deadlock with visiting Rhode Island and was desperately looking for one of its numerous offensive chances to end up in the back of the net. Fittingly, the Eagles turned to a freshman in Stefan Sigurdarson, who had already taken five shots in the game. After stealing the ball at midfield, Siguradarson flew down the middle of the Rams’ defense and tucked a left-footed shot into the top corner. The late strike proved enough to keep BC undefeated through the first three games of its regular season, sinking URI, 2-1.

Sigurdarson’s game winner extended the Rams’ (0-2-1) search for their first win of the season. It was first-year players that led the charge for the Eagles (3-0) in this one, with goals scored by Amos Shapiro-Thompson and Sigurdarson, and goalkeeper Giacomo Piccardo earning the win in the cage.

From the very beginning of the match, it was clear that URI goalkeeper Stefan Schmidt was going to have a hard-fought night in net. The Eagles’ attack started off hot immediately, tallying a goal just 12 minutes into the game. Amos Shapiro-Thompson stole the ball at midfield and ran it right up the middle where he eventually ripped a right-footed shot to give his squad an early lead. The early lead was short-lived, though, as it took just two minutes for URI to find an answer.

The Rams wasted no time in generating a response, as BC gave its opponent a free kick opportunity. Edvin Akselsen nailed the post from just outside the box, and Simon Uri Trcka found himself at the right place at the right time. He capitalized on Akselsen’s rebound and slotted the ball past Piccardo. The score was tied up at one apiece, and it would remain that way for the majority of the game.

In looking only at that final score, one might assume that this matchup was more even than it actually was. In reality, it was BC’s game to lose, and that much was evident on the box score. URI’s defenders were pressed all game long, with the Eagles’ forwards peppering Schmidt with an impressive 23 shots, 10 of which came on goal and nine alone, including the decisive one from Sigurdarson, were sent in the final 10 minutes.

Those 23 shots were matched by the Rams’ 10 shots, with only a single one of those coming on goal. To make matters worse for the Rams, BC was given seven corner kick opportunities as opposed to URI’s two, although the Eagles failed to convert. Sure, the offensive opportunities were lopsided, but the same cannot be said for the physicality that both squads brought to the pitch. Both sides played an aggressive game defensively, combining for 24 total fouls—10 from the Rams and 14 from the Eagles.

Even though BC was dominant in terms of creating scoring opportunities at a consistent rate throughout the entire game, it struggled to finish. Schmidt, a redshirt junior, is no slouch in net, but the Eagles surely didn’t need to stress until the final minutes for the go-ahead goal. Finishing high quality chances is something BC will need to work on before conference play begins, as the Eagles are averaging almost 20 shots per game but have managed just five goals in three games.