Del Rey Stays True to Her Sound on New Album

In his 2014 Pitchfork review of Ultraviolence, Mark Richardson described Lana Del Rey’s third album as “a Concept Album from a Concept Human.” When looking at Del Rey’s career as a whole, “Concept Human,” sounds like the most apt description.

People have questioned the authenticity of her individual character and persona since she first gained notoriety after the release of 2012 singles “Blue Jeans” and “Video Games,” but there’s no denying Del Rey has unique lyrical skills on her albums. She creates compelling characters that harken back to a spectrum of old muses, from the likes of the Eagles, Fitzgerald, Lou Reed, and more. She describes her subjects with a sort of full-brushed, vivid style, pointing out their beauty and their faults—as well as those of the worlds she creates—with a satirical wittiness that maintains her self-awareness.

On her newest album, Norman Fucking Rockwell!, Del Rey stays true to what she knows.

“It’s about this guy,” she explained in a Beats 1 interview with Zane Lowe, “who is a genius, but he thinks he’s the shit and he knows it.”

NFR! is a case study on the pitfalls of genius and how hubris can destroy not only one’s art but all aspects of their life. Her muse is problematic, self-destructive, and irreverent, but, on some level, so is Del Rey’s character. “There’s things I wanna say to you/But I’ll just let you live,” she sings on standout track, “Cinnamon Girl,” “Like if you hold me without hurting me/You’ll be the first who ever did.” Del Rey’s characters are tragically broken, but also incredibly gripping.

The album’s mood is most reminiscent of 2014’s Ultraviolence, with its spare, somewhat pulled back sound. Both albums consisted of gut-wrenching ballads, but while Ultraviolence leaned more on the blues as its compass, NFR! is much warmer, grabbing inspiration from Del Rey’s often-professed love for California. Production from in-demand producer Jack Antonoff helps to create this soft soundscape with piano and guitar as its backbone.

The smooth, pulled-back production gives Del Rey’s voice room to shine. Unlike 2017’s star-studded Lust for Life, which featured appearances from artists like The Weeknd, A$AP Rocky, Stevie Nick, and Sean Ono Lennon, Del Rey is all by herself on this album. The change works wonders, leaving ample room for her to shine.

At the core of this album, though, is an ode to California. From the song “California” to the cover of Long Beach band Sublime’s “Doin Time,” Del Rey has California on her mind. But there’s an unusual darkness to it—Del Rey’s California is far from what it used to be. Her characters try to chase the feeling of that old life, yet they understand that things can’t go back to the way they were. Even outside of California, it seems as if she’s looking at how much life has changed around her. On “The greatest,” she claims to miss New York and music, specifically rock and roll.

In a recent interview with the New York Times, Del Rey expanded on that point, looking back with nostalgia on her early adult years, when hers and millions of others’ experiences were soundtracked by bands like The Strokes and The White Stripes. But things have changed. Kanye West went blond, Trump became president, gun violence became an almost everyday occurrence—not featured on the album but worth a listen is Del Rey’s recent single “Looking for America,” a somber response to the recent litany of tragic mass shootings. Life now seems so incredibly distant from just a few years ago.

On NFR!, Del Rey and Antonoff create a tragically romantic depiction of life, change, genius, and artistry. Each song builds upon the last, describing characters, landscapes, and experiences with great detail. And just like every Del Rey album, at the center of this fabricated world is Lana, steadfast and hopeful despite her scars and the reality of how messy life truly is. The final line of the album, “hope is a dangerous thing for a woman like me to have … but I have it,” is a perfect example of what Lana’s been all about her whole career: hope in the face of tragedy after tragedy. Ultimately, NFR! is a wonderful album, and perhaps even—to steal a title from one of the album’s songs—“The Next Best American Record.” 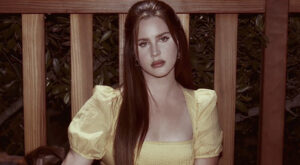