Conte Forum, home to Boston College’s hockey and basketball teams, can only be described as rowdy. Upon entering Conte, one finds themselves among a throng of BC fans cheering and clapping. The same heightened feeling of adrenaline and excitement that Conte gives people was present with the Class of 2023 on Thursday afternoon during Convocation.

After completing the walk down Linden Lane, the newly-christened Eagles entered Conte, prepared to greet their keynote speaker: Chris Wilson. And though Conte isn’t known for being quiet, when Wilson spoke, all eyes were on him.

Last February, Wilson released his first book, The Master Plan: My Journey from Life in Prison to a Life of Purpose. Distributed to the Class of 2023 over the summer, the new freshmen read his autobiography in preparation for his keynote speech.

A checklist of what he desired to better about himself, Wilson’s Master Plan covered everything from getting in better shape to learning a new language. Throughout his speech, Wilson connects his message in the book about the plan to the feeling of uncertainty many freshmen feel as they begin attending college. Thinking about the next four years they have to maneuver is daunting, and Wilson understands. Not too long ago, he tells them, he had no idea how to navigate through life. With nothing but a plan and a drive to turn his life around, Wilson persevered–and is now a proud owner of a flourishing business.

Growing up without his actual father, Wilson’s grandfather served as a parental figure in his life. Diagnosed with skin cancer when Wilson was just 16, his grandfather was given a choice: His doctor could either amputate his legs and most likely rid the cancer from his body, or he could keep his legs—but would likely die within the year.

Wilson urged his grandfather to go through with the amputation. He didn’t.

After that appointment, Wilson lived every day with his grandfather like it was his last.

“I would watch the sun rise [with him], [and] I would watch it set,” he said as he addressed the Class of 2023. “I would sit by his side while cancer slowly ate my grandfather alive. I was 16 and in the process of trying to understand my life.”

Wilson casts a certain kind of spell over a crowd as he talks. His confidence on stage is comforting, and he isn’t afraid to bear his soul to the audience—the good and the bad.

Growing up in a poor neighborhood in Washington D.C., Wilson carried a gun with him for protection. At just 17, he took somebody’s life after a nighttime altercation. Tried as an adult, Wilson was sentenced to natural life in prison.

Wilson’s family and friends abandoned him. For everyone in his life, his sentence was the end of his story.

But not for Wilson. Tucked away behind bars, he recalled his grandfather’s last words to him.

“I remember he called for me [in the hospital],” Wilson said. “And said he wanted me to promise I’d come up with a plan to turn my life around.”

It was in prison when Wilson drafted what he called his Master Plan, which should serve as an inspiration for not only the Class of 2023, but for all BC students.

Though he knew he was going to spend the rest of his life in prison, Wilson began to chase his grandfather’s dying wish. He started to read whatever he could get his hands on. And he read, and read, and read until he had finished hundreds of books. He taught himself how to speak three different languages. He mentored younger inmates and created a career center within the prison. Not only did he earn his GED, but he is now working on a second college degree. He decided he would buy his dream car—a black Corvette—if he succeeded in getting his sentence reduced.

During his time in prison, he also befriended a fellow inmate named Stephen. Addressing the audience, he recalled his first run-in with Stephen, who was also serving a life sentence.

Stephen was sitting by a window with a large stack of computer science books, he recalled. Though he was wary of Wilson at first, Stephen soon warmed up to him and told him that he was trying to teach himself computer programming. He wanted to have his sentence reduced and start a business upon returning to his community. Wilson, wanting the same for himself, found a companion and mentor in Stephen.

Influenced by Stephen and the countless other inmates that he met while serving his sentence, Wilson kept working toward his ultimate goal of getting out of prison and fulfilling his plan. And despite being denied reconsideration for his sentence five times, a judge gave Wilson a second chance after 16 long years.

Speaking before the Class of 2023, Wilson stood a testament to the Jesuit ideals that BC instills within each student—serving the people around them.

Upon release, Wilson started the Barclay Investment Corporation, whose mission is to “enlist talent to accelerate social innovation in Baltimore and advance a citywide agenda for equity and racial justice,” according to its website. Wilson has helped 275 people in Baltimore find jobs and has traveled to 21 countries within the past 18 months alone.

Conte Forum’s crowd, typically buzzing with loud conversation during games, was silently captivated by the time Wilson ended his speech and allowed the audience to ask questions. During the Q&A, Wilson spoke about everything from helping people in his neighborhood in Baltimore to his dream of finding a business savvy woman to match his energy.

Each question began with the student thanking Wilson for telling his story and offering inspiration to their class. Many wondered which stage of his Master Plan Wilson is in now.

“The master plan evolved as I [went],” he said. “I left it open on purpose because that’s how plans should work.”

Wilson placed himself at almost 95 percent finished with his Master Plan, but has no intention of stopping anytime soon. Each day, he pushes himself, not only to fulfill his grandfather’s wish by completing his plan, but also to add new things, he said.

When asked what advice he can give to the incoming freshmen, he echoed what he has learned from the past 40 years.

Wilson’s impact on BC’s Class of 2023 was as evident as whistles, shrieks, and claps thundered through Conte as he stepped off the stage and drove off in his black Corvette—the car he dreamed he would have one day. 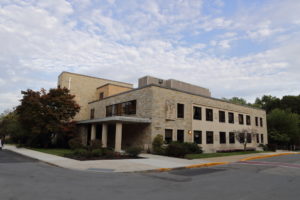 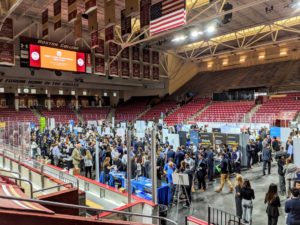