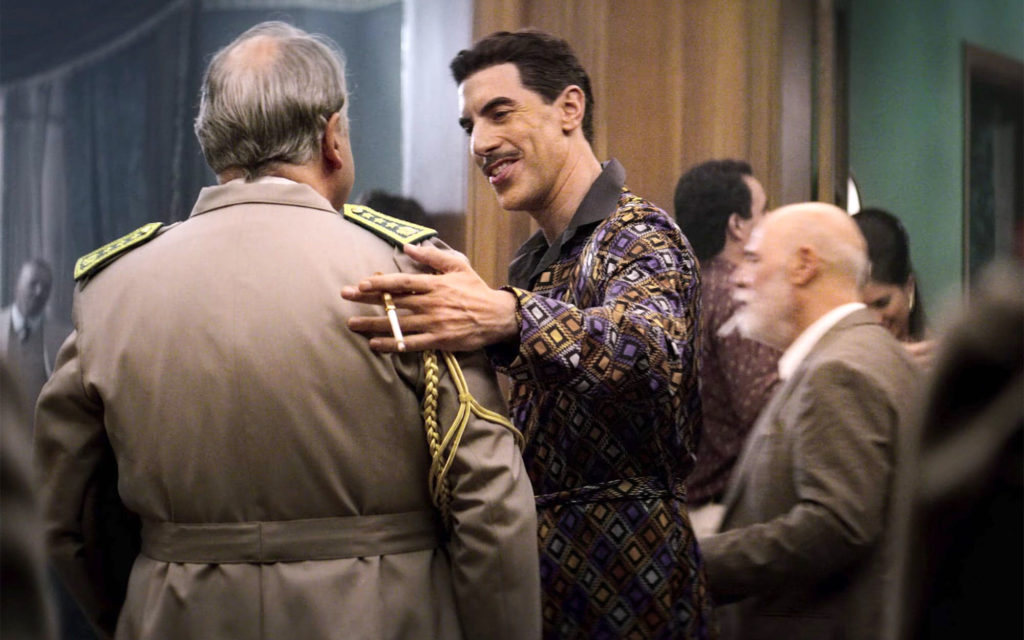 Sandy tones and a dramatic score create the chilling scene, as Eli Cohen (Sacha Baron Cohen), the famous Israeli spy, steps into a noose in front of the president of Syria, who only weeks ago was one of his closest friends. A flashback of a beautiful woman blowing kisses in a sunny grass field appears before a final transition to a love note and a fade to black that denotes the grim news of Cohen’s execution.

The Spy, a Netflix Original limited miniseries directed by Gideon Raff was released on Friday. The show dramatizes the legendary story of Cohen, who managed, from 1961 to 1965, to infiltrate the Syrian government to the point of being offered the position of Syrian Deputy Minister of Defense. His story is both remarkable and tragic. Exposed while transferring information through Morse code back to Israel, Cohen was swiftly arrested, tortured, and hung—his body never returned to Israel.

From the beginning of the show, the audience is aware of Cohen’s fate. The show begins with his wife Nadia (Hadar Ratzon-Rotem) listening on the radio and collapsing in tears as the conviction of her husband is announced by the Syrian government through the radio. Cohen, an Egyptian-born Arab Jew, looks to find his place in Israeli society and is often overeager to prove his devotion to his new country, as he feels that the others see him differently.

Formerly staying behind in Egypt to smuggle Jews into Israel, Cohen applies twice to the Mossad, the national intelligence agency of Israel, only to be turned down both times. With Syrians becoming more aggressive, however, the Mossad becomes desperate for a spy to infiltrate the top ranks of Syria, and after six months of intensive training, Cohen assumes cover as a wealthy businessman and goes to live in Buenos Aires.

Posing as the son of a Syrian expatriate, Cohen tries to get close to the upper echelons of Syrian command and eventually gains entry into Syria, where he acquires the trust of high-ranking officials and throws parties where the drunken guests would let important information slip. Meanwhile, back in Israel and left in the dark about her husband’s real job, Nadia becomes pregnant and struggles to raise children on her own.

Dan Peleg (Noah Emmerich), Cohen’s handler, also plays a large role in the show. Feeling morally ambivalent about recruiting Cohen, Peleg strikes up a friendship with Nadia after telling her he’s Cohen’s manager. Watching Nadia toil in her domestic isolation, in addition to being aware of Cohen’s own misgivings, Peleg is torn between his personal values and his commitment to his job and his country.

Cohen’s capture is also suited for the screen. Cohen’s life in Israel begins to crumble after four years of absence, as Cohen’s brother finds out about his activities and Nadia becomes increasingly suspicious. Suidani (Alexander Siddig), the distrustful adviser of the Syrian president, was convinced an Israeli spy was in their midst. Using modern technology, he picked up satellite signals driving past Cohen’s house. In a dramatic, tense scene, Cohen was interrupted while sending information back to Israel by soldiers storming in, ending his operation and sealing his fate.

The Spy displays both glamor and action, but also the hard realities of working in espionage. Living the life of a spy comes with the reality that Cohen must leave family behind. Although he is shown to be devoted to his wife, his children’s blank expressions when their father returns, evidently not understanding who he is, puts Cohen’s sacrifice into perspective.

The entire tone of the show is cold. By knowing the ending from the very beginning, the audience is always on edge, wondering when the daring escapades of Cohen will finally end and which creative risk will prove too much.

Baron Cohen’s performance is outstanding. Although a comedian by trade, there is not much brevity in his performance as Cohen, as even the lighthearted moments are shadowed by Cohen’s immense responsibility and enormous secret, as well as the fate that befalls him. Stoic as Cohen, but charismatic and cunning as the businessman that the spy pretends to be, Baron Cohen is as much a chameleon as the real Cohen, bringing a legendary story to life on screen.