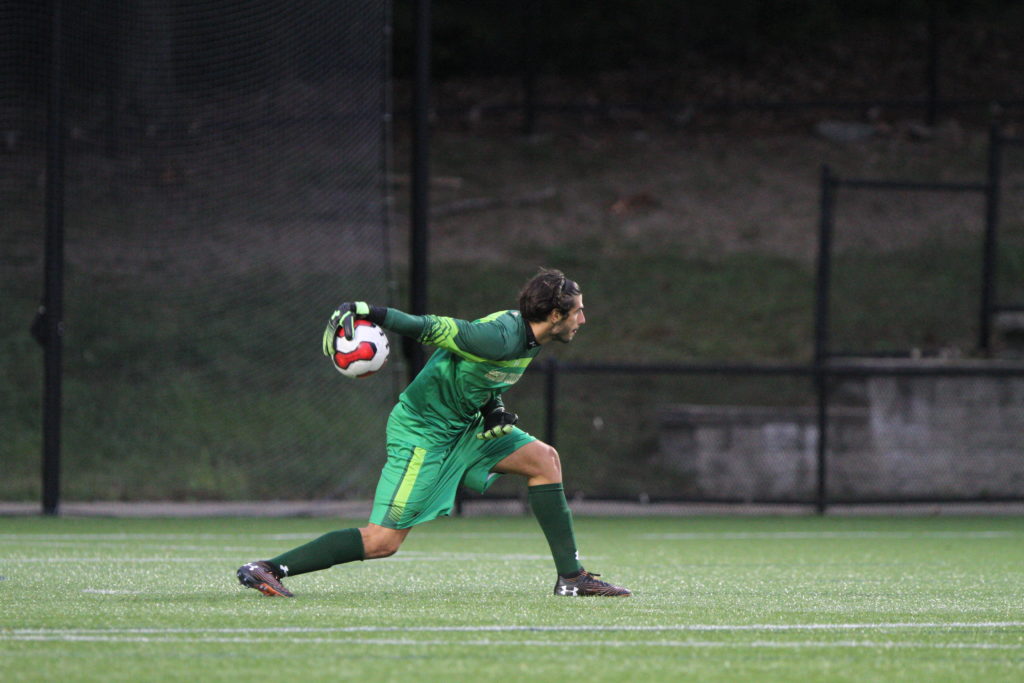 After an exhilarating win over Holy Cross this past Tuesday—which was the third straight one-goal victory for Ed Kelly’s side—Boston College men’s soccer was shut out by North Carolina State, falling, 1-0, in its ACC opener. The Eagles (4-1, 0-1 Atlantic Coast) were unable to conjure up an equalizer, and the late-game dramatics that appeared against the Crusaders, Rhode Island, and Boston University were nowhere to be found.

From the opening minutes of the game, any BC (4-1, 0-1 Atlantic Coast) fan could see that it would be a tough match to win. The Eagles struggled early on, allowing the Wolfpack (3-1-1, 1-0-0) offense to control the game throughout the first half. Of the six freshmen in the Eagles’ starting line-up, perhaps the one most challenged by the Wolfpack was goalie Giacomo Piccardo. The Genova, Italy native—who has started in all of BC’s games thus far—faced seven total shots and three shots on goal in the opening half.

One of those seven shots, by N.C. State freshman defender Pablo Pedregosa, came just over 23 minutes into the first half and snuck by Piccardo, giving the Wolfpack the lead for good. After sustained pressure, N.C. State earned a corner kick and Gabriel Machado found Pedregosa, who scored inside the far post on a volley. BC, on the other hand, only managed two total shots in the opening half—both just wide of the net.

Despite trailing by a goal, the Eagles were able to conclude the first half cleanly, only committing two fouls to the Wolfpack’s five. The same could not be said for the second half, as BC freshmen Alejandro Zimmermann and Mike Suski both received yellow cards, and David Norris, a junior from N.C. State, was also booked.

Although the Eagles couldn’t get on the scoreboard, they weren’t without solid opportunities. Late in the contest, freshman Stefan Siguardarson—who scored the game-winner two games ago against URI—had an excellent chance to beat N.C. State goalkeeper Vincent Durand, but was robbed of his potential game-tying goal by the veteran goalie. After the full 90 minutes had passed, BC had only seven total shots and one shot on goal, struggling to truly challenge Durand on N.C. State’s home turf.

The game ended as such—BC shut out by N.C. State, 1-0, in a similarly disappointing manner to last year’s loss in the first round of the ACC Tournament. It was a tough loss for the Eagles, especially after they started 4-0 for the first time since 2011. Following a rough start to the first half, BC rallied in the second, getting close to the tying goal that it fought for.

Despite the unfavorable outcome, the Eagles are shaping up well as conference play continues. BC has a starting line up that includes six freshmen, including midfielder Amos Shapiro-Thompson, who has proven himself to be a prolific offensive player. The Worthington, Mass., native has led the offense this season, tallying goals against Quinnipiac and Rhode Island. Piccardo, another freshman from Genova, Italy, has solidified himself as a starting goalkeeper and had four saves in the loss. Finally, freshman defender Victor Souza, another starter in the game against N.C. State, was a wall in front of the net, blocking key shots that would have resulted in an even larger deficit.

These few freshmen, along with all of the other bright young stars, have taken steps forward in each game. The season has barely begun—the Eagles still have 11 games left on their calendar, including seven more ACC matchups. They’ll have to find their scoring stride that was evident earlier in the season, though, in order to provide just enough support for Piccardo, the conference’s fifth-best goalie by goals against average.