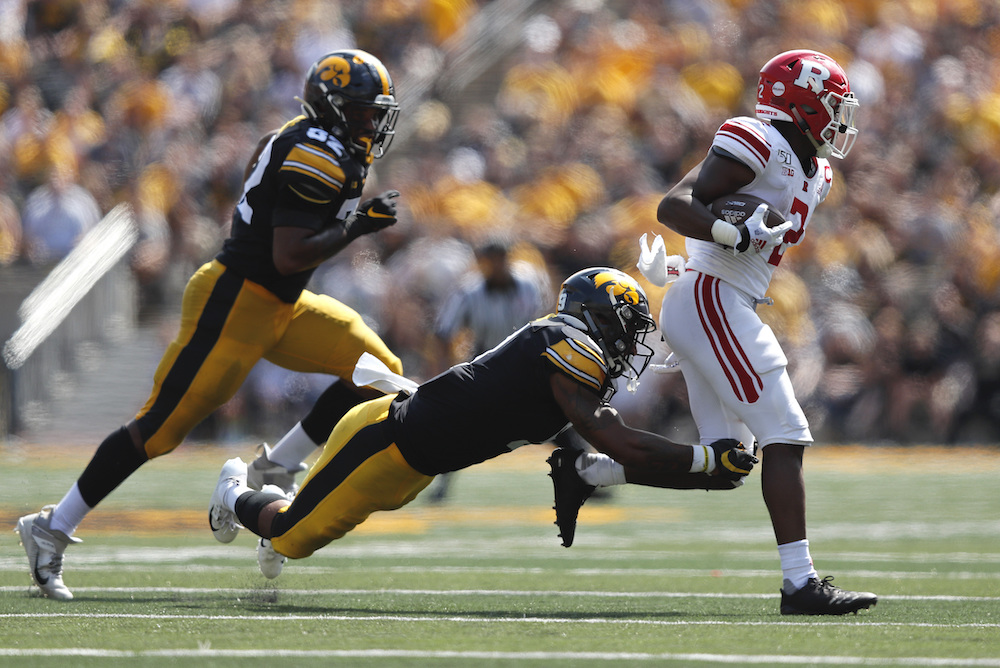 There’s no doubt that Boston College football can’t wait to get back on the field after Kansas handed the Eagles a 24-point loss, the Eagles’ worst in recent memory, last Friday night. BC is likely tired of hearing about how poor its performance was against the Jayhawks, a team that was coming off a 12-7 loss to Coastal Carolina, and is ready to turn the page.

In theory, a great way to get back on track is against Rutgers (1-1, 0-1 Big Ten), a program that has gone just 8-30 in head coach Chris Ash’s tenure. But there are a lot of variables at play. After all, this is the first road tilt for a shaky defense, and Rutgers is still a Power Five team.

While the Scarlet Knights have won just three conference games in as many years, BC (2-1, 1-0 Atlantic Coast) learned against Kansas that it cannot take any opponent for granted, even if they are a perennial Power Five bottomfeeder. Many believe that head coach Steve Addazio is coaching for his job this week, and BC will need a strong and focused effort on Saturday to cool down its coach’s hot seat.

Who is BC playing?
Rutgers

Where is BC playing?
HighPoint.com Stadium, Piscataway, N.J.

How to watch:
The game will be aired on the Big Ten Network.

Saturday’s matchup will renew a matchup between two former Big East teams who met every year between 1981-2004 but have not faced off in the 15 years since. The Eagles hold an all-time record of 19-6-1 against the Scarlet Knights, including victories in 13 of the last 15 meetings. Additionally, in each of the last nine matchups, BC sported at least a 10-point margin of victory.

Saturday’s contest will mark the first of four scheduled meetings between the former rivals in the coming years. The Eagles will travel to Piscataway this season as well as in 2027, and the Scarlet Knights will pay visits to Chestnut Hill in 2022 and 2026.

What to expect from Rutgers:

The Scarlet Knights have put up 48 points in their first two games this season, but the problem is that all of them came in one game. In its opening contest, Rutgers had no trouble gashing Massachusetts on the ground, led by Isaih Pacheco’s 20 carries for 156 yards and four scores. However, going from an FCS opponent to a ranked one in Iowa did not treat Rutgers’ running game well. Trailing for the entirety of the contest, Ash went away from the run game, giving Pacheco only nine carries, and his team put up a goose egg against the Hawkeyes. When the Scarlet Knights’ run game is working, Pacheco is a physical runner with breakaway speed who can punish and tire out defenders, but when they become pass-happy and predictable, defenses can key in on receivers—Rutgers has already been picked off five times in two games.

The quarterback position has been one that has given the Scarlet Knights turmoil for years now. The last time the leading signal caller in terms of pass attempts for the Scarlet Knights threw more touchdowns than interceptions was Chris Laviano back in 2015. Last season, the issue hit a new low when highly-heralded freshman Art Sitkowski sported a sub-50 completion percentage and tossed four touchdowns to go along with 18 interceptions. The Old Bridge, N.J., native was then benched in the Scarlet Knights’ second-to-last game of 2018, before senior McLane Carter won the starting job this offseason. The southpaw Carter, however, suffered a concussion in the second half against Iowa last week, and still without clearance, Sitkowski is in line to start against the Eagles.

“Art [Sitkowski] had a tremendous training camp, and the players, the coaches, everybody has nothing but 100 percent faith and trust in him to go out and lead the team,” Ash said Thursday after announcing Sitkowski as the starter, via nj.com.

Sitkowski is a pocket passer, and Rutgers typically likes to spread the field and predominantly operate out of the shotgun. The passing game has been sporadic, with the Scarlet Knights tossing for nearly 350 yards against UMass, but just 47 against Iowa.

Ash is, by trade, a defensive coach, but strong defense was rarely on display in 2018 for a 1-11 team that allowed 31.4 points per game. Subsequently, Ash went out and hired David Buh this offseason to take over as the program’s defensive coordinator. Buh held the same position at Maryland for the previous three years and helped take the Terps’ defense to the next level. In 2018, Maryland’s defense was fifth in the nation in interceptions with 18, and three Terps defenders were awarded All-Big Ten Honors.

However, the aggressive style with which Buh leads his secondary is taking the Scarlet Knights some time to adjust to. Of the six touchdowns that Rutgers has allowed so far, five have been a result of 20-plus yard plays, which bodes poorly for an explosive BC offense. This is characteristic of an aggressive secondary that is overpursuing, letting receivers get behind them, and taking poor routes to tackle ball carriers. Addazio praised the Scarlet Knights’ run defense in his weekly press conference, but Rutgers’ front seven has been lackluster, allowing over five yards per carry last season and in each of the first two games this season, and last year’s sack leaders, Elom Lumar and Mike Tverdov, notched just four apiece.

While Rutgers has struggled early on in games, they’ve gotten better as contests have gone along. So far this season, the Scarlet Knights have allowed 41 points in the first half, compared to just 10 in the second half. Rutgers also starts eight upperclassmen, who should be getting more comfortable with Buh’s system as the season goes along.

Although the Eagles are 8.5-point favorites entering Saturday, ESPN’s Football Power Indexes predicts just a 50.3 percent chance of victory. With both teams coming off 20-plus point losses, they both have everything to play for. Addazio and Co. should look to jump out on Rutgers early, as they have been very good at starting hot the past few weeks. They should attack Rutgers’ front seven with AJ Dillon and David Bailey, both of whom can be bullies in the trenches. Keeping in mind the tendency of Rutgers defenders to overpursue, play-action deep shots may be successful as well, forcing defenders to come up and stop the run.

This will be the first road test for a young BC defensive unit that got torched in giving up 329 yards on the ground a week ago. But, for the first time this season, the Eagles won’t have to worry about the quarterback pulling the ball out and running on read options. Sitkowski is a pocket passer, which will help defensive ends Joey Luccheti and Marcus Valdez in not needing to make a decision on whom to pursue. Controlling the running game is the key to a strong defensive performance, but a few opportunistic plays against a quarterback who failed to protect the ball last season would help too. In being the last tune-up game before the conference gauntlet awaits, a “get right” game would put BC back on track, but another loss would be a huge blow to this team’s confidence and would make Addazio’s seat that much warmer.