Home » Eagles Come up Short in Back-and-Forth Thriller With No. 6 Florida State 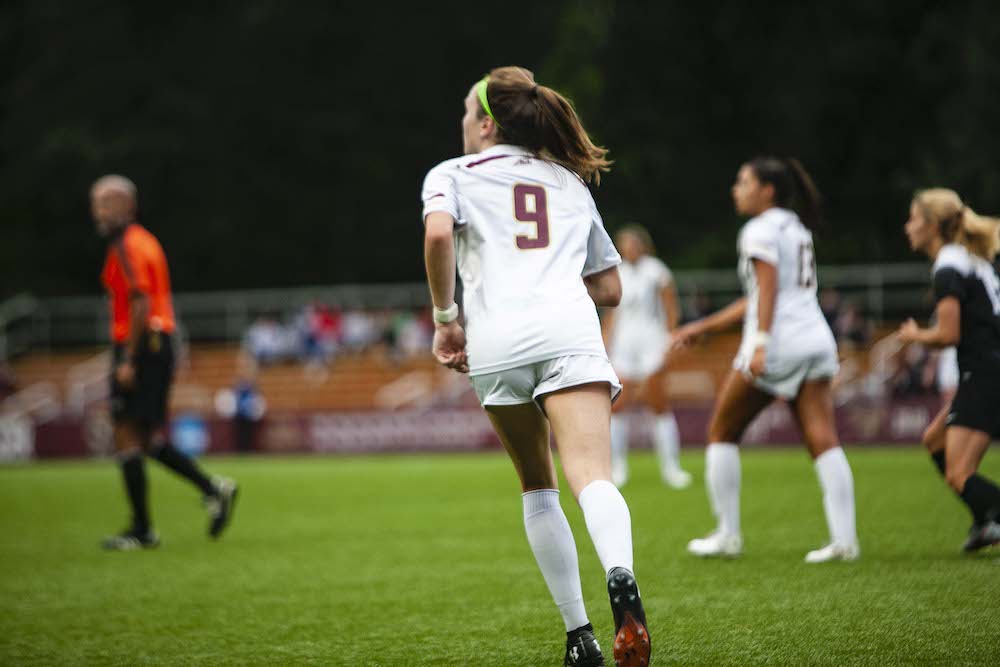 Eagles Come up Short in Back-and-Forth Thriller With No. 6 Florida State

Boston College women’s soccer finished non-conference play riding an impressive 7-0-1 record, heading into its first ACC match of the season with plenty of confidence against a tough opponent in No. 6 Florida State. In the first game of league competition, the Eagles found themselves in a back-and-forth affair in which they eventually fell, 5-4.

While BC (7-1-1, 0-1 Atlantic Coast) had won two of the last three meetings between the teams, they hadn’t bested the Seminoles in Tallahassee yet, and that pattern held true. FSU (7-2, 1-0) more than tripled the Eagles in shots, 32-10, and had a decisive 14-8 edge in shots on goal. While Eagles forward Olivia Vaughn scored in the 85th minute to make things interesting, the Seminoles were able to use a two-goal night from Jenna Nighswonger and a trio of assists from Deyna Castellanos to hold off BC.

While FSU entered as the favorite, BC was the team taking most of the shots in the opening minutes. After the first corner kick taken was by the Eagles, Sam Smith connected on a header. It was just too high for goalkeeper Caroline Jeffers, and Smith ended up with the first ACC goal of her career.

The Seminoles weren’t about to let that goal go easily, though. Nighswonger launched a shot from the edge of the box that initially looked as if it was going to sail over Allie Augur’s head. The freshman didn’t have a chance to jump, though, due to the ball bouncing off the crossbar and back into play. While Augur dove to save the second attempt, Michaela Agresti was there to cover her teammate and kick the last attempt away, keeping FSU off the board.

The Eagles may have been ahead, but the Seminoles took that as an opportunity to up the ante, knocking on BC’s door. Midway through the first half, FSU settled into the Eagles’ defensive zone, doing everything it could to tie up the score. With the pressure added, the Seminoles took three consecutive free kicks that looked to be their saving grace, but they couldn’t connect to tie up the score.

While BC had eight fouls to FSU’s one in the 25th minute, the Eagles weren’t looking to be aggressive—they were just chasing a team that was slightly faster than them, trying to hold onto their lead. The Seminoles were just biding their time, however. After a BC turnover, Kristen McFarland was able to outrun her defender and draw Augur out. With the net wide open, McFarland found the perfect opportunity to get on the board, continuing the Seminoles’ streak of 18 straight games with a goal.

Making its home in Eagles territory, FSU turned to Makala Thomas. The sophomore delivered, putting the Seminoles ahead for the first time. Yet the Eagles didn’t let that faze them. After their third corner kick of the game, Gianna Mitchell connected right in front of Jeffers and buried the ball in the net, equalizing the match for BC heading into the break.

Less than three minutes into the second half, it looked like FSU was primed to retake the lead, but Augur was compromised and an offside was called on the Seminoles. After being denied in the first, Nighswonger was ready for a second chance. She used the same formula as McFarland before her and drew out Augur to give FSU its third goal of the night.

But, after another corner kick, Smith was subbed back into the game and connected for BC’s third successful corner kick, coming off a feed from Jade Ruiters. While the Eagles had tied up the game, all three of their goals were off corner kicks, and in order to deliver an upset, they needed to create non-set piece scoring chances.

The tie was short-lived, as FSU was able to score on a corner kick of its own to reclaim the lead. Following a second goal by Nighswonger, the Seminoles established a cushion for themselves. With the minutes dwindling, the Eagles were beginning to show their fatigue as the Seminoles continued to add heavy pressure on defense.

Yet the tables quickly turned—with just under five minutes left in regulation, Vaughn took a shot from the back of the penalty box and logged BC’s first non-corner kick goal, closing in on FSU’s lead. But her late strike wasn’t enough to light the flame for BC, which fell to the Seminoles on the road again, dropping to a 0-10-1 record in Tallahassee.

After a 5-4 game, neither coach walked away from the match happy. That said, FSU’s Mark Krikorian was slightly more satisfied with his team than BC head coach Jason Lowe. With a week to prepare until the Eagles face off against Miami, Lowe and the team has time to readjust.

Manufacturing more shots outside of set pieces and avoiding defensive breakdowns is what guided the Eagles to an unbeaten conference record, and they’ll need to return to that if they are to stockpile wins in a very competitive ACC.