“Bad things are going to happen,” various characters of American Horror Story: 1984 warned throughout the show’s season premiere on Wednesday night. The warnings, sometimes frantic and other times ominous, felt like a promise and a threat: In contrast to the garish displays of last season’s premiere, the first episode of 1984 packed both crafty—albeit chaotic—exposition and good ol’ fashioned jump scares into its hour-long first episode.

The title 1984 serves as both a touchstone for this season’s apparent focus on surveillance (à la George Orwell) and as an indication of time period—if the leopard print dresses and cheesy references to Def Leppard weren’t obvious enough. In 1984, a group of friends take jobs as summer camp counselors to get away from a crime-ridden and increasingly tumultuous Los Angeles: Complaints about the city range from Ray’s (Deron Horton) diss on its heavy traffic (naturally) to Brooke’s (Emma Roberts) trauma following a close encounter with the Night Stalker (Zach Villa), a real-life serial killer who gained notoriety for a string of violent murders and sexual assaults throughout California in 1984 and 1985.

Any season premiere of AHS is inevitably complicated: In order for a storyline to come full circle in 10 episodes, you don’t have the luxury of time when setting the scene. The first episode of 1984 was, like the show’s past premieres, chaotic.

Aside from Brooke’s run-in with the Night Stalker, Mr. Jingles (John Carroll Lynch, who played Twisty the Clown in Freakshow) broke out of an asylum to reprise his own murderous past, choosing a mechanic as his first victim in a decade. Brooke, a sympathetic character with a kind heart, narrowly escapes Jingles later in the episode. AHS leaves room for viewer intrigue with the latter, as the evidence of Jingles mysteriously disappears from the cabin. Oh, and the God-fearing camp director Margaret Booth (Leslie Grossman) is one of Jingles’ only survivors. Is this plot sounding convoluted yet? Good, you’re still with me.

AHS is known for its rotating storylines—each season introduces a new concept and a new cast of characters. But the show also has a history of intertwining storylines, especially in the case of Apocalypse (Season 8) and Hotel (Season 5), which both featured the return of Coven (Season 3) characters. 1984 already gave a hearty nod to Hotel with its focus on the Night Stalker, whose real name is Richard Ramirez. In the fifth season of the show, Ramirez (then played by Anthony Ruivivar) attends James March’s (Evan Peters) Devil’s Night dinner party along with a slew of other dead serial killers.

In April, Peters told Extra that he was going to “sit the season out,” so the extent to which AHS will weave Hotel into 1984 remains to be seen. Other AHS heavy-hitters didn’t don their neon garb for the ninth season’s premier either. Absentees included Jessica Lange, Evan Peters, Angela Bassett, Kathy Bates, and, most notably, Sarah Paulson, who has received Emmy nominations for her performances in five of the show’s seasons. Although Paulson would have slipped perfectly into the role of camp director, the actress reportedly had to minimize her screen time due to her prior commitment to Ratched, Murphy’s upcoming Netflix series based on Ken Kesey’s classic novel One Flew Over the Cuckoo’s Nest.

1984 borrows just enough kitsch from its namesake year for the show to still feel serious. Low-brow humor dominates the show’s bouts of comedic relief—Montana compares Trevor’s (Mitch Morrison) penis to a “lightning rod” while the two are making out in the midst of a storm in one egregious case. Displays of debauchery don’t reach the levels achieved by the first episode of Apocalypse, which shocked viewers with reality TV quality filming and, even worse, reality TV quality dialogue. Even though the episode was undoubtedly intended to shock, 1984 recognizes the importance of first impressions, striking a careful balance between spectacle and immersion.

Season 9, although so far an improvement from early episodes of the last season, comes at a time when audiences are harboring haughtier tastes for horror. When AHS first premiered with Murder House in 2011, Jordan Peele was just a comedian (Okay, but imagine if Peele wrote and directed a season of AHS. Imagine.) and Paranormal Activity 2 was the standard for horror. In a post-Get Out and Midsommar world, horror fans want a snappier storyline. If AHS is to deliver on its promises of “bad things,” it’s going to take more than just guts (literally) and wit to captivate modern audiences. 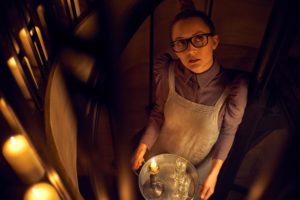