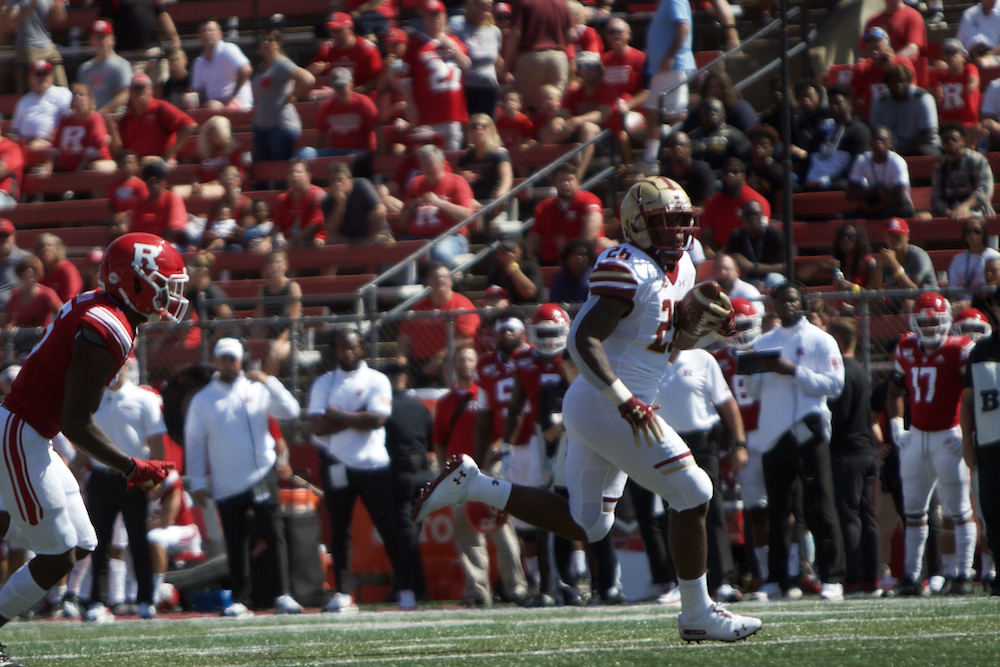 PISCATAWAY, N.J. — Homecoming came early for Anthony Brown, Ben Petrula, and 15 other Boston College football players who hail from the Garden State, when the Eagles traveled to Rutgers on Saturday afternoon to square off against the Scarlet Knights for the first time since 2004. Unfortunately for BC, however, the Eagles’ 30-16 win over their old Big East rival wasn’t always heartwarming.

In fact, after scoring on its opening drive, the Eagles’ offense punted three series in a row and saw Rutgers—a team that has won three Big Ten games in as many years and laid a goose egg against Iowa two weeks ago—take a first-half lead. Looking to hand BC its second consecutive upset loss, the Scarlet Knights hung around, drawing within eight points in the final frame, as the Eagles committed seven penalties and struggled through the air. But an AJ Dillon-led rushing attack helped BC distance itself from Rutgers, lock up a bounce-back victory, and start the season 3-1 for the second straight year.

Here are some observations from the Eagles’ first road game of the season:

The tandem of Dillon and Bailey continues to flourish

Last week against Kansas, sophomore running back David Bailey carried the ball a season-low seven times. Dillon shouldered most of the workload, and BC drifted away from the run game, while trying to keep pace with the Jayhawks. At Rutgers, though, head coach Steve Addazio and offensive coordinator Mike Bajakian went back to the Dillon-Bailey rotation—and it worked like a charm. On the first drive of the game, Dillon recorded four carries for 28 yards before Bailey busted out a 42-yard touchdown run. The two ended up combining for 227 yards and three scores, spearheading a bruising BC rushing offense.

A Garden State battle under center—and a surprising winner, too

Brown and Rutgers quarterback Artur Sitkowski go way back. The two grew up about five miles away from each other and crossed paths during their high school football careers. On Saturday, they were back on the same field, jousting for a Week 4 victory. Brown took the win, but Sitkowksi—who was filling in for injured fifth-year senior McLane Carter—got the better of his New Jersey counterpart. Sitkowski, a sophomore that threw four touchdowns and 18 picks in 2018, completed 20 of his first 24 attempts and racked up a career-high 304 passing yards.

Anthony Brown shows off his legs, not so much his arm

Just like last week, Brown had a hard time establishing any sort of rhythm at Rutgers. He started the game 5-of-11 for 36 yards, averaging a mere 3.3 yards per attempt. The third-year starting quarterback’s frustrations continued, but the incompletions weren’t always on him. It appeared as if route running played a role in a few of his misfires. That said, he missed some easy throws while rolling out of the pocket, even overthrowing his tight ends in the flat.

Brown finished 13-of-25 for 159 yards, and was arguably more exciting in the run game. The redshirt junior carried the ball 11 times for 40 yards, at one point converting both a 3rd-and-8 and 4th-and-1 on the same scoring drive, and snuck the ball in from the 1-yard line for six.

Rutgers’ special teams have a day

Practically every time Rutgers faced a fourth down, boos flew head coach Chris Ash’s way, as the fourth-year Scarlet Knights head coach almost always opted to punt. It wasn’t sexy, but it made for a pretty impressive special teams performance. Punter Adam Korsak routinely flipped the field, landing each of his five punts inside the BC 20-yard line. Two of the junior’s punts traveled 50 or more yards, with his long clocking out at 54. Not to mention place kicker Justin Davidovicz, who drilled all three of his field goal attempts, including a 50-yarder that cut Rutgers’ deficit to eight in the fourth quarter.

Once again, the Eagles’ defense is haunted by defensive breakdowns

Although hardly perfect, BC was better in the tackling department on Saturday, particularly when wrapping up Rutgers’ ball carriers—the Scarlet Knights only had three running plays that spanned 10 yards or more and averaged just 2.9 yards per rush. Most of the issues on defense centered around coverage breakdowns.

Most notably, just eight minutes into play, Raheem Blackshear slipped out of the backfield and sprinted past Max Richardson. The linebacker was slow to react to his assignment, and as soon as Sitkowksi connected with Blackshear, the tailback was off to the races. Blackshear made Mike Palmer look like a deer in the headlights, as the junior rumbled past the safety and the rest of BC’s secondary for a 74-yard score. No mistakes were more egregious than that, but defensive coordinator Bill Sheridan’s unit had a number of gaffes in coverage, like when Sitkowski got three Eagles to bite with a pump fake, freeing up Aaron Young for a 17-yard gain late in the second quarter.

After finding the end zone in each of the first two weeks of the season, true freshman wide receiver Zay Flowers only touched the ball three times in BC’s defeat to Kansas. He entered Saturday with three receptions on the year and matched that mark four minutes into the third quarter. Flowers ended the game with those three catches for 29 yards and two rushes for another nine yards. Yet the freshman could have had more.

Toward the end of the second quarter, Brown dialed up a pass from the BC end zone to a wide-open Flowers. One juke away from a highlight-reel play, the freshman started running with the ball before he made the reception. Flowers eventually left the game in the fourth quarter after turf pellets obstructed his vision, but Addazio told reporters post-game that the wideout is fine.

Penalties all around, yet BC’s lack of discipline especially apparent

The Eagles and Scarlet Knights combined for 18 penalties—BC was responsible for seven of those, a few of which will surely have Addazio scratching his head in the film room. Near the end of the first quarter, Rutgers trotted out Korsak on 4th-and-4. Before he could get a boot on the ball, defensive back Lawrence Stevens was called for a false start. But after the whistle blew, BC nose tackle TJ Rayam shoved Scarlet Knights linebacker Olakunle Fatukasi to the ground, committing an unsportsmanlike conduct penalty. The infraction gifted Rutgers with a fresh set of downs and eventually led to a 23-yard Davidovicz field goal.

Then there’s the delay of game penalty that Brown took right before half. Following a 15-yard hookup with Hunter Long, Brown raced to the line of scrimmage and spiked the ball. Despite having the full play clock to prepare for the next snap, the redshirt junior couldn’t get it off on time, costing BC five yards. Aaron Boumerhi still drilled the ensuing 37-yard field goal, but it’s those kinds of penalties that the Eagles can’t afford in ACC play. In 2017, BC ranked tied for second in the nation, registering just 3.6 infractions per game. Now, the Eagles are being flagged seven times per contest, dropping to 83rd in that category. BC’s loss of talent is one thing, but poor discipline is a whole other entity, related to player focus—or lack thereof—and coaching.

The Eagles came into the weekend tied for second in the country with a plus-7 turnover margin. Takeaways have helped BC compensate some crucial mistakes on the defensive side of the ball. That proved to be the case against Rutgers as well. Addazio’s team forced a pair of Scarlet Knights turnovers, starting with a forced fumble early in the second quarter.

Holding a 10-7 lead inside its own 20-yard line, Rutgers decided to run the ball on 2nd-and-15. But Blackshear was swarmed by a host of BC defenders and, on his way down, Eagles defensive end Brandon Barlow jarred the ball loose. What followed was a game of hot potato, where three BC players tried to recover the fumble before Mehdi El Attrach jumped on it. The Eagles scored a touchdown four plays later and never relinquished the lead.

Next came an interception in the final stages of regulation. Trailing by two scores near midfield with less than five minutes to play, Sitkowski escaped the pocket and dashed toward the left sideline. While trying to avoid a Bryce Morais sack, Sitkowski spun and heaved up a duck. Palmer was there for the pick, BC’s seventh interception of the season, which all but ended the game.