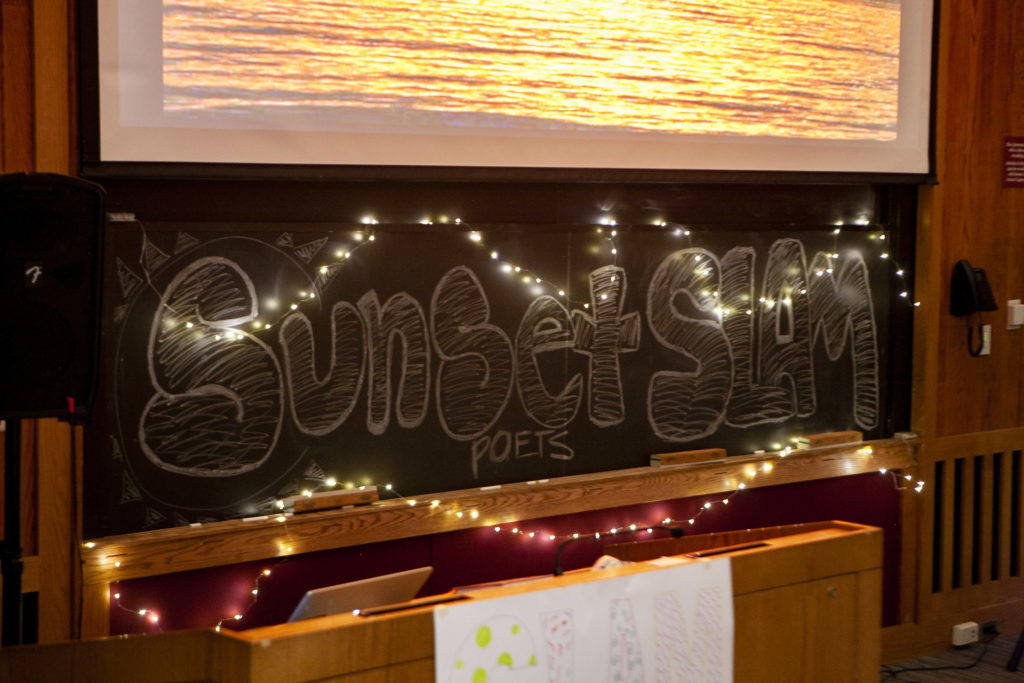 Slam poetry is more than just spoken poetry, and it is more than the vocalization of a written piece. It is a performance. SLAM!—which stands for Soul, Love, and Meaning—Boston College’s spoken word club, channeled the power of words during its first Sunset SLAM! of the year. On Tuesday, the poets of SLAM! took to the mic in McGuinn 121, spoke their minds, and bared their souls.

As patrons walked into McGuinn 121, they were greeted by a lone mic in the middle of a dimly lit room with fairy lights draped behind it, flickering and flashing a yellow glow upon the poets. Soulful music poured from the speakers as the guests took their seats, while the projector displayed a photo of a red sunset, which cast the room in an auburn light.

As this was SLAM!’s first event of the year, Liv Sorenson, MCAS ’22, took the time to introduce the club and explain the concept and importance of slam poetry—and did so through poetry. She focused on how slam poetry can make its audience feel uncomfortable. Sorenson asked the audience to understand how this uncomfortable feeling may have more to do with what it says about you and not the poetry itself.

She explained that the event was a safe space for poets to come forth and speak their minds without judgment, and that slam poetry serves as an outlet for these young individuals to move forward and grow. Her explanation of slam poetry involved a lesson on the appropriate ways to show appreciation—snaps, cheers, “mmhmm,” and the occasional “Yes Poet!”

“In my opinion [slam poetry] has a really fluid definition, it can be rap or music or a haiku read aloud—as long as it is something you relate to or has a message that you want others to hear,” Sorenson said. “Slam poetry for [SLAM!] is really just self-expression in a safe space without creative boundaries.”

Following this introduction, eight other poets and Sorenson, for one more poem, took to the mic to speak about topics that matter to them. Out of respect for the performers, this article will not discuss the contents of the poems.

Slam poetry has no limits or bounds on what can or cannot be said or performed. The poets spoke about challenging life moments, and the air was thick with emotion and the empathy of the crowd was palpable. Due to the strength of the poetry, audience members could feel immersed in the situations described and empathize with the poets’ emotions. The performances were heightened by the way the performers played with the sound of their voice, their placement on the stage, and the connections they made with the audience. The performers spoke with forceful enunciation, using the popping of P’s and B’s to emphasize different words and grab the audience’s attention. 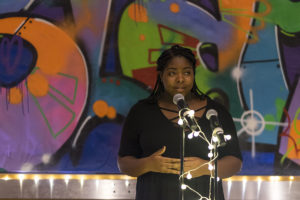