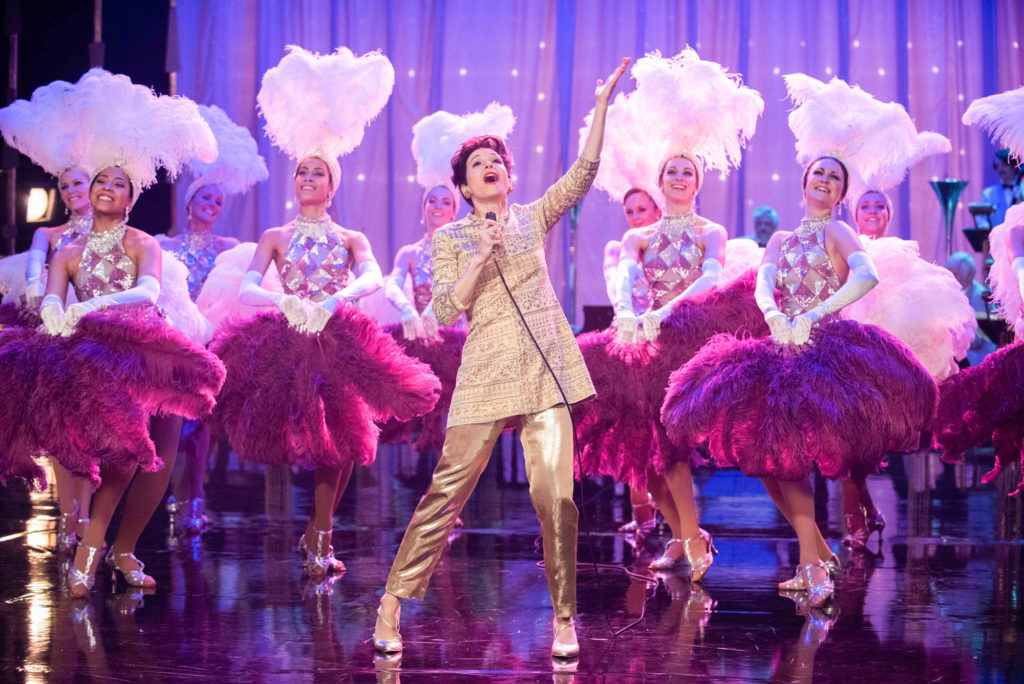 Director Rupert Goold navigates the path of discussion from the yellow brick road toward one that explores the realities of the tragic life lived by Judy Garland in his new film Judy. The life of the beloved American singer and actor is closely examined to bring light to the hardships faced by the woman in the ruby red slippers.

The film itself takes a raw and realistic approach to the star’s short, fast-paced life, choosing to center its attention around the later stages of Garland’s life instead of her more remembered younger years. Its dream-like start pictures a young Garland on the set of The Wizard of Oz. Being interrogated by the director of the film about whether she is truly devoted to the role of Dorothy, the audience is first introduced to the actress’s internal struggle: the tension between Garland’s love of performing and a “normal” life. Sitting amid the beautiful set of the land of Oz, Garland finds herself being forced into a life that will constrict her in almost every aspect, though her name is sure to be remembered.

This fear of being forgotten is depicted as a driving point for Garland in her decision to stay in the industry. Fueled by pills and her own delusions, the film portrays Garland’s happiness as being directly correlated with both her relevance and the existence of true and meaningful relationships, which she quickly learns do not easily coincide with each other.

She is warned early on by her manager that if she chooses to let go of her career, she will be swallowed up by the rest of America and forgotten, like a raindrop falling into the sea. The film uses this scene as a foundation, building off Garland’s aspiration for a legacy.

Flashing forward to her later years, Garland is found with two kids, no home, and only fleeting moments of fame. While her name is well known across the world, her renowned voice and performances bring nothing more than fame to Garland—who is grossly underpaid and taken advantage of by executives for their own gain throughout her entire life.

With permanent lipstick-stained lips and a professionally manufactured smile, Garland is authentically portrayed by Renée Zellweger. Known for her past roles in Bridget Jones’s Diary and Chicago, Zellweger assumes the role of Garland in its entirety—leaving the viewer not to analyze her performance throughout the film but to assume that she is Garland herself. Garland’s famous laugh, dodgy eyes, and “everything is fine” mentality were perfectly executed by Zellweger and dramatically enhanced the film. Zellweger’s singing proves to be a near facsimile of Garland’s.

Genuine smiles are only given by Garland in moments when she understands the joy she brings to others. Sitting in the home of two of her self-proclaimed biggest fans, they are brought to tears at the sound of her singing, which only leaves Garland confused at the realization that her performances really do have an impact. The film does an excellent job of portraying how Garland overlooked the effect of her music on others, and ultimately forms the base of the emotion that drives the film. Giving her first performance at just 2 years old, performing became second nature for the star and quickly lost any true meaning to a person who longed for happiness.

Rupert Goold includes various instances of Zellweger staring longingly into the camera in order to convey Garland’s intimate connection with her audience. In the film, Garland performs and seemingly looks directly at you—enabling you to see past her jovial façade to a person longing for deeper meaning and connection. Looking directly at the camera, Garland sings “Someday I wish upon a star / Wake up where the clouds are far behind me / Where troubles melt like lemon drops.” The well-known lyrics are given a deeper meaning as one considers overworked nature of Garland’s lifestyle depicted so clearly in the film.

The film concludes on a somber note, as if to tie a bow on the overall emotional experience. From watching the film, one is able to see past the image of Judy Garland as the all-American performer and instead come to understand her as a complex and manipulated figure that was swallowed by Hollywood and spit out to fend for herself. Judy serves as a reminder to look past the carefully constructed personas of prominent figures and view them as human beings. After all, as Garland reminds the audience in the film, she is only Judy Garland for one hour each night.