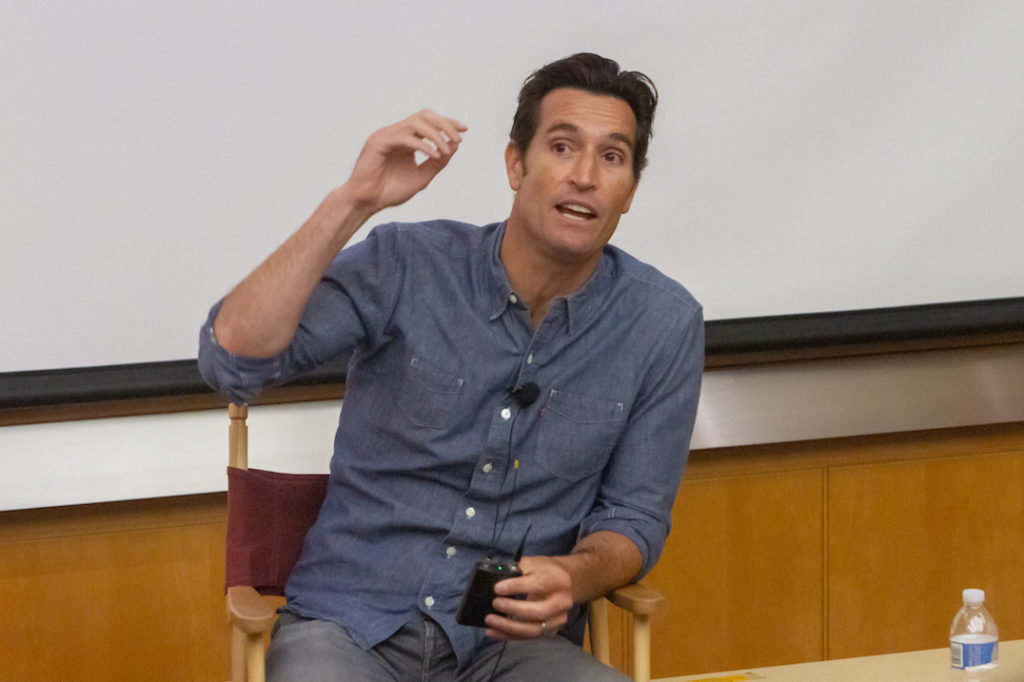 Matthew Del Negro, BC ’94, returned to his alma mater on Monday to speak on ambition, resilience, and making it in the media industry.

Del Negro, who majored in English and minored in film studies at BC, has held roles in Scandal, Goliath, The Sopranos, The West Wing, and Teen Wolf, among many other productions. He is currently starring in the Boston-based TV series City on a Hill as detective Chris Caysen.

His experience in Hollywood inspired him to create a podcast called 10,000 “No”s, where he holds conversations with high achievers discussing their life paths and how they got to be where they are today.

The inspiration for the podcast came from a period of Del Negro constantly being put down and being told “no.” He decided to take this negativity and turn it into a platform to inspire others, he said.

At Del Negro’s talk on Monday night, he began with where it all started.

When Del Negro first came to BC, he played lacrosse—at the time, the University had a varsity men’s lacrosse program. He had no idea he wanted to be an actor until he had a change of heart between his sophomore and junior year. Del Negro quit his sport and got the lead role in a one-act play, which he performed for two nights in a lecture hall.

“That was my illustrious beginning of my acting career,” Del Negro joked.

When Del Negro told people he was going to be an actor, they didn’t believe him, but he said that didn’t matter to him.

“It fully spoke to me. I wanted to do something that fully used me up and that’s what I did,” he said.

Del Negro pointed out that it’s okay for people not to know what they’re going to do at first. The path won’t be easy, and there will be many hardships, but those hardships can actually end up being good things, he said. People learn from the moments when they’re knocked down.

Del Negro said he still gets told “no” all the time.  But when this happens, it’s a time for learning and growth.

Del Negro touched upon the effects of social media as well. He said that he used to be against  social media—not purchasing a cell phone until the age of 27—but that he has since changed his mind. Being connected on social media has given him the opportunity for many guest appearances.

The problem with it, Del Negro said, is instant gratification. He advised the audience to disengage from social media sometimes.

Sitting in this kind of discomfort may not be what people want to do right in the moment, but it  will lead them where they need to go in the long run, Del Negro said. If people are using social media to avoid themselves and what they need to work on, then at some point they need to take a step back from it.

When people scroll through Instagram, they also need to keep in mind that it’s just everyone’s highlight reel, he said.

He also shared an important insight he learned from BC: While a college student, he made the mistake of separating in his mind academics and “the other stuff.” Now, his life is intertwined, he said. Del Negro emphasized that students need to not only assess their talents and use what they already have to its greatest potential, but also form good connections with the people around them.

It also doesn’t matter how people start their careers, he said, long as they learn in the process. Del Negro started his career bartending in Manhattan, but he said he used the job as a learning experience.

People might have jobs they don’t want when they’re first starting out, but they should try to do the best that they can with them, Del Negro said. What’s important is not the work someone is doing, but how they’re looking at it.

“You [have] to reframe everything that you’re doing to empower you [and] squeeze the most out of it,” Del Negro said. “Lean into where you are. Lean into the frustration.”

Talent is only a small part of success—the most important things to have are the drive and the right mindset, Del Negro said. People should take the things that are their greatest weaknesses and find a way to make them their greatest strengths.

“If you do get knocked down, just remember how you flip it and make that thing that’s your biggest liability your biggest asset,” he said.