Home » Behind New Faces, BC Beats PWHPA in Exhibition Game 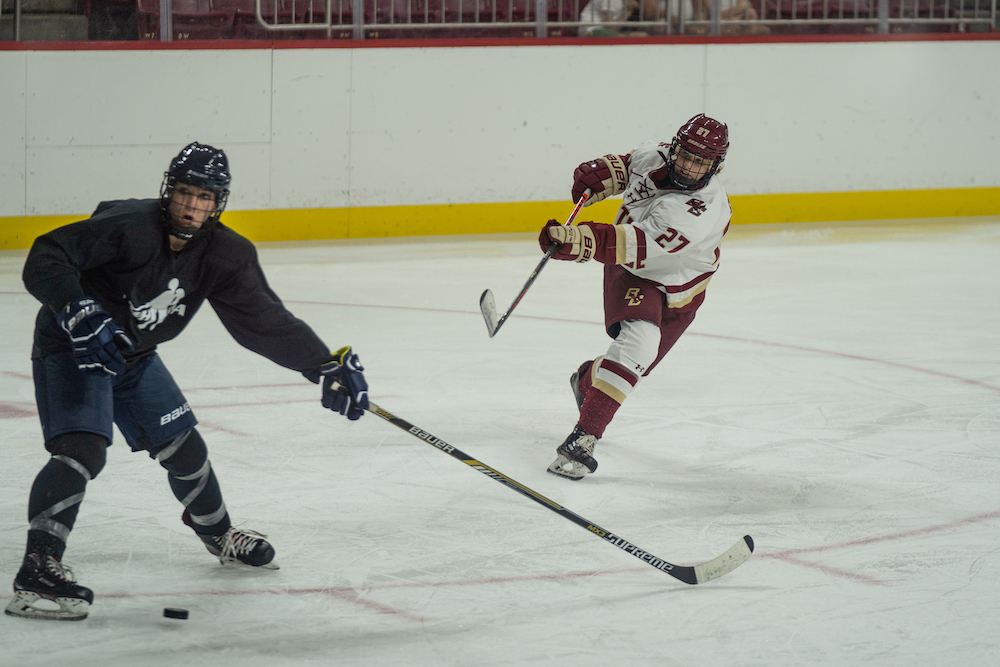 Behind New Faces, BC Beats PWHPA in Exhibition Game

It took Boston College women’s hockey about a period to find its rhythm during Saturday’s exhibition against the Professional Women’s Hockey Players’ Association (PWHPA), but the Eagles pulled ahead for the final time with just over two minutes left in the second period when Hadley Hartmetz found the back of the net, securing a 3-2 victory.

Head coach Katie Crowley was particularly happy with her team’s effort so early in the season. She admitted that when a team steps on the ice for the first competitive hockey matchup of the season, the results can be checkered. When new players settle into new roles, it often can lead to overthinking what the best move is.

But BC showed up ready to face off against professional players who were in a similar situation: The PWHPA’s New England region members hadn’t played an official game before Saturday afternoon, and ultimately both teams lacked precision typical of one of the top college hockey programs in the nation or of a group of professional athletes. The game was filled with chippy play and penalties—players were sent to the penalty box nine times—and the first period was defined by back-and-forth play as both sides tried to settle into their respective systems.

“I thought it was a good game for us,” Crowley said. “We’ve been practicing for short periods of time here the last couple weeks, and you’re trying to put a lot [of system work] in. … It’s always good to see what your team has and what you’re doing well and what you need to work on.”

Eagles captain Erin Connelly agreed, noting that although this game was about getting back into the swing of things for the older players, newer members of the group were tasked with picking up BC’s schemes from scratch. She said she was impressed with how in sync players were, despite it being just September.

Crowley pointed out that many of the players from last year’s squad who have now departed were key to the Eagles’ power play and penalty kill. Her strategy on Saturday was to roll her lines, no matter the scenario, and see how players adapted to filling in the holes left by their predecessors.

Adjusting to a new-look team didn’t stop the Eagles from finding the back of the net, nor did it lead to massive slip ups in the defensive third of the ice. The PWHPA struck first when Megan Myers, a four-year pro and former captain of the CWHL’s Worcester Blades, slipped into space in the slot and fired a shot past Maddy McArthur 11 minutes into the game. Two minutes later, Hannah Bilka answered with an unassisted shorthanded goal.

From that point on, BC started pouring on pressure. Oliva Finocchiaro fired three shots on net in the first period, and the Eagles mustered 13 shots on target—to the PHWPA’s five. Crowley identified BC’s ability to shoot the puck as a strength on the afternoon—BC attempted 67 shots—but also said her crew will have to work on how they pressure opposing goaltenders: 37 of those attempts were on target, which, despite the large total, was too inefficient for Crowley’s liking.

Lindsay Agnew hit a trailing Alexie Guay six minutes into the second period while up a skater, and Guay found the back of the net from close range to give the Eagles their first lead of the night. Ten minutes later, Myers scored her second of the afternoon to knot things up, but Hartmetz sealed the deal three minutes after that off a feed from Bilka.

McArthur tended goal in the first period, her backup Kelly Pickreign backstopped BC in the second, and third-string goalie Molly Barrow played the final 20 minutes, making seven saves—as many McArthur and Pickreign made combined.

On the other end of the ice, the Eagles faced three former teammates: Makenna Newkirk, BC ’19; Toni Ann Miano, BC ’18; and Katie Burt, BC ’18. Crowley and Connelly admitted it was a bit strange seeing her former teammates, clad in all black, skating at Kelley Rink but trying to take down BC. Newkirk assisted Myers’ second goal, and Burt backstopped the PWHPA for the first period, making 12 saves.

“Before the game, I was like, ‘Oh, that’s going to be so weird playing against them,’” Connelly said. “But then I thought about it, and we play so competitively in practice in mini-games that I don’t think that today was any different from any experience I had playing with them for the past four years.”

She did cite a moment where Miano nodded her head at a teammate to show where she wanted her to skate to receive a pass, but the movement didn’t register with Miano’s teammate while Connelly immediately recognized it.

The importance of the PWHPA’s presence—and the presence of former Eagles as a part of that association and the National Women’s Hockey League—at BC and on the international stage wasn’t lost on Connelly and Crowley either.

“I mean, they’re fighting for the future of our game,” Crowley said. “And I think they’ve done a great job so far. … They’re fighting for [every college hockey player] and for the younger players to watch—for something bigger than themselves. I give them a lot of credit for being able to stand up for women and women’s hockey.”