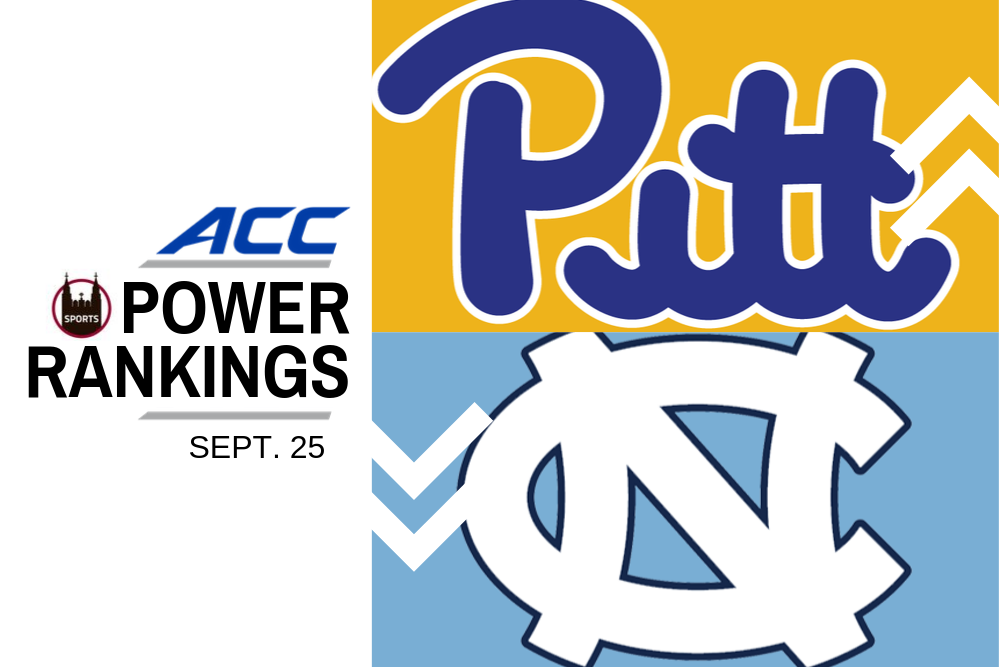 If last week was a very bad week for the ACC, then this past weekend could probably aptly be described as not great, but good enough. After many teams in the conference suffered horrific losses, most, if not all the ACC (yeah, we’re looking at you, North Carolina), bounced back to take care of business in Week 4. Not every team won convincingly, but at least there were no terrible defeats—like losing to a team that hadn’t beaten another Power Five team on the road since 2008—and no more tweets like this one:

Anyway, with most of the conference back on track, here’s the latest edition of the ACC Power Rankings.

After a 52-10 demolition of Charlotte—which came in to the contest averaging 47 points per game—the Tigers have now won 19 regular season games in a row. Trevor Lawrence threw for two touchdowns, and the Tigers led, 38-3, at halftime, allowing them time to play their backups liberally. Dabo Swinney played five different quarterbacks and nine different running backs, ensuring that Clemson would be rested before a road test against North Carolina next weekend.

It was close, but the Cavaliers made sure that they wouldn’t be the second ranked team from the state of Virginia to lose to Old Dominion in the past two years, overcoming an early 17-0 deficit to beat the Monarchs, 28-17. UVA has a dominant defensive second half to thank for that, as it limited Old Dominion to just 46 yards in the latter portion of play after giving up 17 points in the first 20 minutes of the game. The Cavaliers now have the 18th-best defense in the country, in addition to the dynamic Bryce Perkins, according to S&P+, and look like the best team in the always chaotic ACC Coastal division.

The Demon Deacons and their high-flying offense, which currently averages 38.0 points per game, kept rolling last weekend with a 49-7 beatdown of Elon. Jamie Newman continues to look like the real deal and has completed an astonishing 71.1 percent of his passes for 1,278 yards through four games. The dual-threat quarterback also has one of the best receiver duos in the country in Scotty Washington and Sage Surratt. The two have combined for 860 receiving yards and have won three of the first four ACC Receiver of the Week Awards this season.

After falling just short against No. 12 Penn State in Week 3, Pittsburgh rebounded in a big way against then-No. 15 UCF, which had won 27 regular season games in a row. With a late fourth-down touchdown pass from running back AJ Davis on a variation of the “Philly Special,” the Panthers beat the Knights, 35-34, to get back to .500. Even better for Pittsburgh fans, quarterback Kenny Pickett continues to look more comfortable in new offensive coordinator Mark Whipple’s offense.

The Eagles didn’t look entirely convincing in a bounce-back victory against Rutgers, but they took care of business against an old Big East rival in their first road game of the season, in large part because of 277 total rushing yards and a defense that limited the Scarlet Knights to just three points in the second half. That defense certainly still has its issues—the pass rush and tackling among them—but BC will have a chance to show its improvement on that side of the ball when Wake Forest and its explosive attack come to Chestnut Hill on Saturday.

The Blue Devils didn’t do anything wrong—it’s pretty hard to when you don’t play a game—and so they don’t fall too far. A road test against Virginia Tech on Friday night will be an interesting barometer of how far Duke, and especially freshman quarterback Quentin Harris, has come since losing, 42-3, to Alabama in Week 1.

It wasn’t pretty for the Wolfpack this past week, as N.C. State scaped by Ball State despite managing just five first downs and 104 total yards after halftime. Head coach Dave Doeren’s team got a big boost from its special teams unit, as Thayer Thomas had a 76-yard punt return touchdown and Max Fisher blocked a punt to set up another score. The fact that Matthew McKay managed just 175 passing yards on 30 attempts against the Cardinals a week after throwing for 207 yards against a rebuilding West Virginia squad is certainly cause for concern moving forward, but, for now, the Wolfpack is 3-1 ahead of their first ACC game of the season.

The Seminoles lost James Blackman to a sprained MCL against Louisville in Week 4 but still pulled out a win, in large part due to the play of Alex Hornibrook—who completed 15-of-20 passes for 255 yards and a touchdown in relief. It’s not like the redshirt senior is an unknown—he did start 32 games in three seasons for Wisconsin before transferring to FSU after the 2018 season—so the Seminoles shouldn’t experience too much of a drop off in quarterback play. The play of star running back Cam Akers, who now has eight touchdowns and 499 yards on the season, should also ease the burden on Hornibrook.

After scoring 50 points in the first three weeks of the season combined, the Orange broke out for 52 points against Western Michigan, beating the Broncos, 52-33, to snap a two-game losing streak. The good news? Tommy DeVito turned in his best performance of the season, completing 27-of-35 passes for 287 yards and four touchdowns while tacking on 84 yards rushing. The bad? Syracuse saw an early 21-0 lead cut to 38-33 in the fourth quarter and has now allowed 137 points in the past three weeks.

After manufacturing clutch plays late in the game to beat South Carolina and Miami in the first two weeks of the season, the Tar Heels seem to have run out of good luck. UNC lost to Appalachian State in Week 4 to drop to 2-2 on the season and saw a potential game-tying field goal blocked on the final play of the game. Freshman Sam Howell certainly looks like the real deal for the Tar Heels moving forward, but Mack Brown still has a host of other issues on his hands as UNC has now trailed entering the fourth quarter in all four of its games this season.

The Hurricanes barely got back to .500 in Week 4. A 30-point favorite against Central Michigan, Miami got all it could handle from the Chippewas, eking out a 17-12 win in a slugfest. It was an ugly day, one that prompted head coach Manny Diaz to declare the performance the Hurricanes’ worst of the season, with good reason. Miami committed 13 penalties, allowed four sacks, and managed just 51 yards on 34 carries.

Not all is well for the Hokies under head coach Justin Fuente, as a pair of decidedly uncomfortable wins over Old Dominion and Furman—teams Virginia Tech should be beating handily—should indicate. Nevertheless, the Hokies are above .500 and have a chance to get the season back on track after a bye when they host Duke Friday night. Fuente still has issues to figure out—namely the lack of a run game—though an experienced Duke defensive line might be difficult to crack.

Despite trailing by 21 points late in the second quarter, the Cardinals nearly pulled off a stunning comeback at FSU, rattling off 24 straight points before ultimately falling, 35-24. Malik Cunningham, who started in place of the injured Jawon Pass, was impressive, throwing for two touchdowns and running for another, but it’s clear that new head coach Scott Satterfield still has a lot of work cut out for him in the rebuilding process.

An off week might have dampened the sting of losing to The Citadel—a team that runs the triple option, no less—but it still doesn’t change the fact that Geoff Collins has some soul-searching to do with the Yellow Jackets. Georgia Tech is scoring just 17.3 points per game, worst in the ACC, and is averaging just 284 total yards of offense per contest. A road game against Temple, who is favored by nearly double digits, doesn’t make things any easier on the Yellow Jackets either.