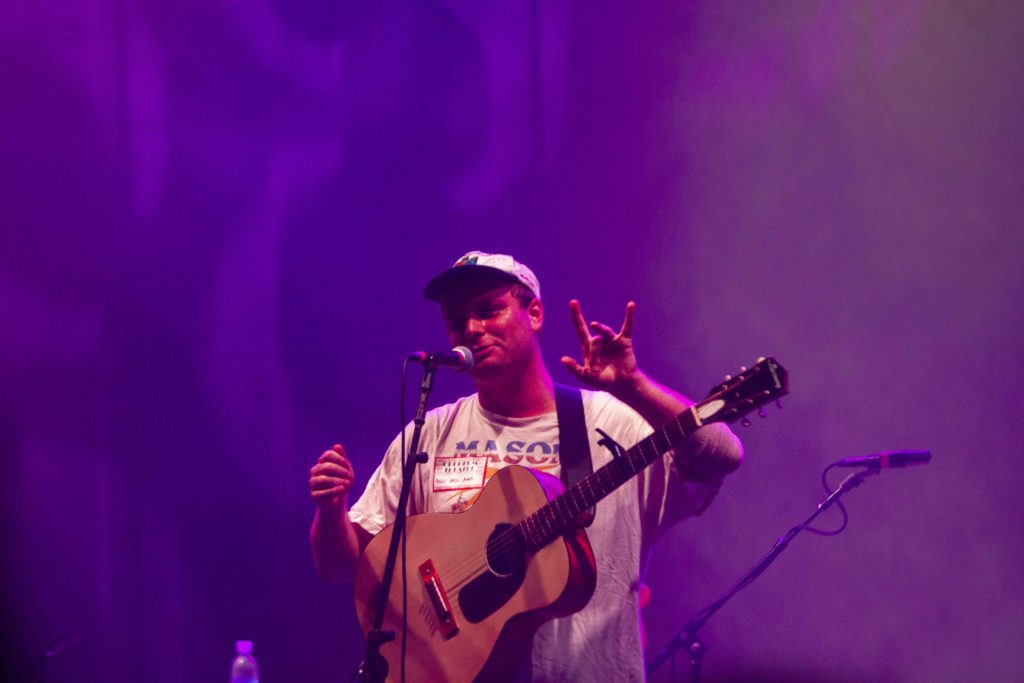 The Mac DeMarco concert was a time.

Mac DeMarco, known for a specific brand of indie rock with a tinge of psychedelic aestheticism, lets his eccentricities shine through in his charismatic and comedic stage presence. As he stood with his guitar, grinning cheekily in his gym shorts and baseball cap onstage at the Orpheum Theater on Sept. 22, his goofy personality captivated the audience.

Immediately upon entering the theater, it was apparent by the look of the concert-goers across the board who they were here for—cigarette earrings, Grateful Dead t-shirts, Dr. Martens of all heights and colors, and a sea of flannels acted as a mish-mash Mac DeMarco fan uniform.

Imagine the insane heat of the Orpheum Theater, with no AC after a day of almost 90-degree weather, compounded by the packed rows of seats and the intoxicating scents of smoke and spilled beer. The old theater abounded with an energy that was antsy—antsy due to both the suffocating heat and anticipation of Mac’s performance. This strange combination of energy only added to the character of a Mac DeMarco show, exemplified by Mac and the band, as they commented on the heat and often took their shirts off throughout the show.

Mac opened the set with a trippy, synthesizer-heavy “On the Level” accompanied by spiraling colorful lights and a full band to complement his guitar-playing and vocal stylings. Mac kept his setlist diverse throughout the concert, playing songs mostly from 2, Mac’s second album, and his newest album, Here Comes the Cowboy. Tracks from 2017’s This Old Dog and 2015’s Another One and were also featured prominently in the set.

Mac ran around the stage swinging his mic in huge circles, yelled at random moments, and performed intriguing dance moves, even doing a handstand onstage during “Chamber of Reflection,” as characteristic of a regular Mac DeMarco concert. The audience, inspired by his oddities, fed into his antics. There was one moment of the concert in particular when Mac screamed for a few seconds into the mic and then everyone in the audience joined in on the screaming, lasting almost a full minute as the crowd reveled in the unity, creating chaos in synchrony.

In between these moments and the music, Mac would chat with both the band and the fans. Mac told the story of how his guitarist had dated his longtime girlfriend Kiera before he did—a fact revealed before they played “My Kind of Woman,” a song about Kiera. The band joked about Boston with the crowd, poking fun at the Boston accent during a conversation where the crowd said “bear” in response to the drummer asking what a “Bruin” even was.

This crowd was there out of an admirable love for Mac, meeting both the new and the older songs with the same level of enthusiasm and excitement. Classics like “Freaking out the Neighborhood,” “Ode to Viceroy,” and “Chamber of Reflection” riled up the crowd, but some of his slower songs gave the audience a chance to relax and absorb the music.

During “Another One,” Mac asked the crowd to turn on their flashlights and sing the chorus with him. The singer turned off the main stage lights, so it was just the band illuminated by the flashlights of everyone’s cell phones (and the sporadic lighter)—a beautiful sequence that again showed Mac’s desire to directly engage the audience. The guitar solos went on during jam sessions that could be considered self-indulgent by other bands’ fans, but Mac’s devoted congregation cheered on the performer’s intricate showing of skill into the night.

During the encore, after covering Kansas’ “Carry On Wayward Son” and a few of The Misfits’ songs, Mac and the band rounded out the show with a cover of Metallica’s “Enter Sandman,” as many of the fans moved up from the back rows closer to the stage. The energy was electric during this final performance, as Mac—with his t-shirt on his head—closed out the song with a final guitar solo. After almost two hours of playing, Mac and his band thanked Boston one more time before they exited the stage, leaving the crowd with a roller coaster ride of a concert that was bizarre yet beautiful, and perfectly Mac.