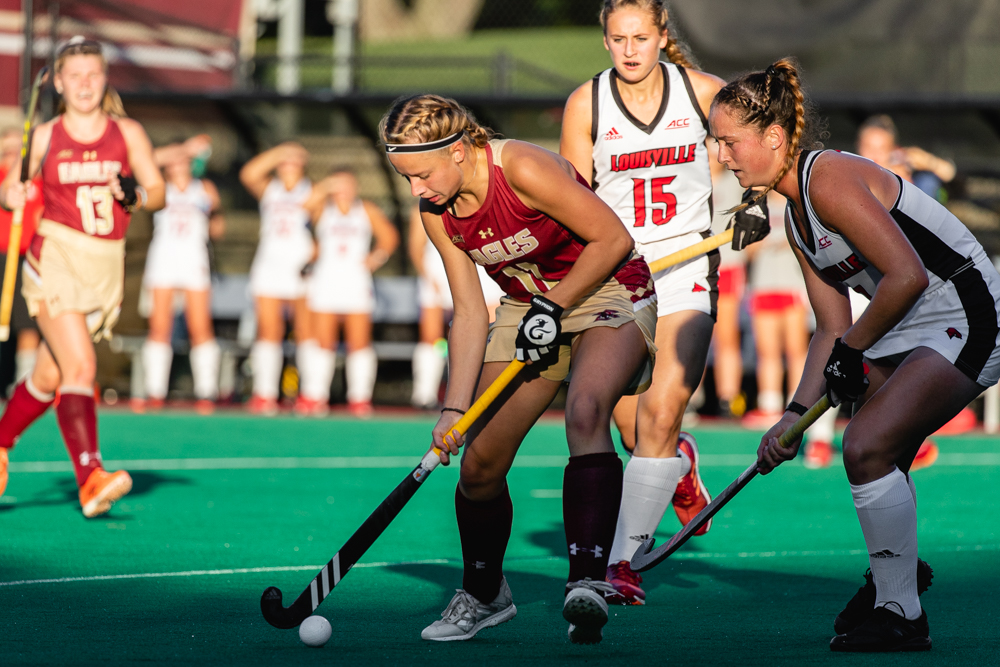 For the first 33 minutes and change of Friday afternoon’s game, Boston College field hockey held No. 6 Louisville scoreless and maintained a scant 1-0 lead. Then, in a flurry of five minutes, all was for naught. The Cardinals scored three of the game’s next four goals, eventually escaping Newton with a narrow 3-2 win.

The No. 17 Eagles’ (4-4, 1-1 Atlantic Coast) three-game win streak came to an end with a crushing defeat, one that evened their conference record and spoiled a chance to come away with a top-10 win over Louisville (7-1, 1-1).

The matchup between the Eagles and the Cardinals proved different from last year where only one goal was scored in a Louisville victory.  Both teams were able to get on the score sheet multiple times in Louisville’s 3-2 victory.

BC continued its trend of outshooting its opponents in the first quarter, with its first shot coming in the very first minute of the match. Freshman forward Charlotte Von Huelsen came down the left side of the field and shot one just wide, and the Eagles continued to apply offensive pressure. They finally broke through about halfway into the period with a goal by freshman forward Jaime Natale. The scoring play came off a centering pass from fellow freshman Margo Carlin, who delivered the ball from the left side to the front of the net.

The Eagles had the Cardinals’ defenders on their heels throughout the period, as they outshot the hosts, 4-0. The same wasn’t true in the second quarter, though, as it was a tight frame with each team playing strong midfield defense. Both sides had one major scoring opportunity, but neither were able to convert. BC went into the half up, 1-0, without giving up a single shot on goal to the mighty Cardinals offense.

The Eagles did not come out of the half with the same rhythm, and instead Louisville came out with much more energy, immediately pressuring the BC back line. Despite giving up zero shots on goal in the entire first half, the Eagles’ defense quickly endured what Doton called a “mental lapse.”

About three minutes into the half, the ball found Louisville’s leading scorer Bethany Russ at the top of the circle, and the forward ripped one past BC netminder Jonna Kennedy for her eighth goal of the season.

“You can’t have a center back hit a forward with [a pass] going straight through our press,” Doton said of the breakdown. “We knew they would make adjustments. We made adjustments at the half. They made one through and their leading goalscorer put one in.”

Yet the Eagles remained positive and were quick to answer when Carlin scored off a corner to retake the lead with her team-high eighth goal of the season. Two minutes later in the period, however, Louisville earned a corner of its own and forward Margot Lawn launched a shot past Kennedy to make the game level yet again.

Louisville took its first lead of the game with seven minutes to go in the third quarter—and it would be one that it didn’t relinquish. Madison Walsh rifled an attempt at Kennedy, and she was able to make the stop, but Walsh stuck with the play and beat Kennedy on her own rebound to put the Cardinals up, 3-2.

The Eagles went into the final frame looking to equalize. Controlling possession, they upped the ante on offense in the early stages of the quarter. When the ball went out of bounds behind the Cardinals’ goal, BC believed it had earned a corner and had a real chance to tie the game. Upon further review, though, it was determined that the ball deflected off an Eagles’ player rather than the Louisville defender, erasing the corner. Considering they already had one goal off a corner on the day, this would have been a great opportunity for the Eagles to knot the game up. BC ended the contest without that crucial equalizer, even though Doton pulled her goalie with over two minutes remaining.

The Eagles showed promise in a difficult conference matchup, but much like last year, suffered a narrow one-goal loss. It came down to a five-minute spurt in which Louisville made its move, a lapse in focus that cost BC a victory that would have significantly helped its NCAA Tournament chances. The path doesn’t get easier, as the Eagles will face No. 11 St. Joseph’s on Sunday.

“It will be completely in their control to come back and compete,” Doton said of her team’s next game. “We have another hard game on Sunday, even if it’s out of conference.”