Home » BC Concedes Twice in the First Half, Loses to No. 22 Louisville 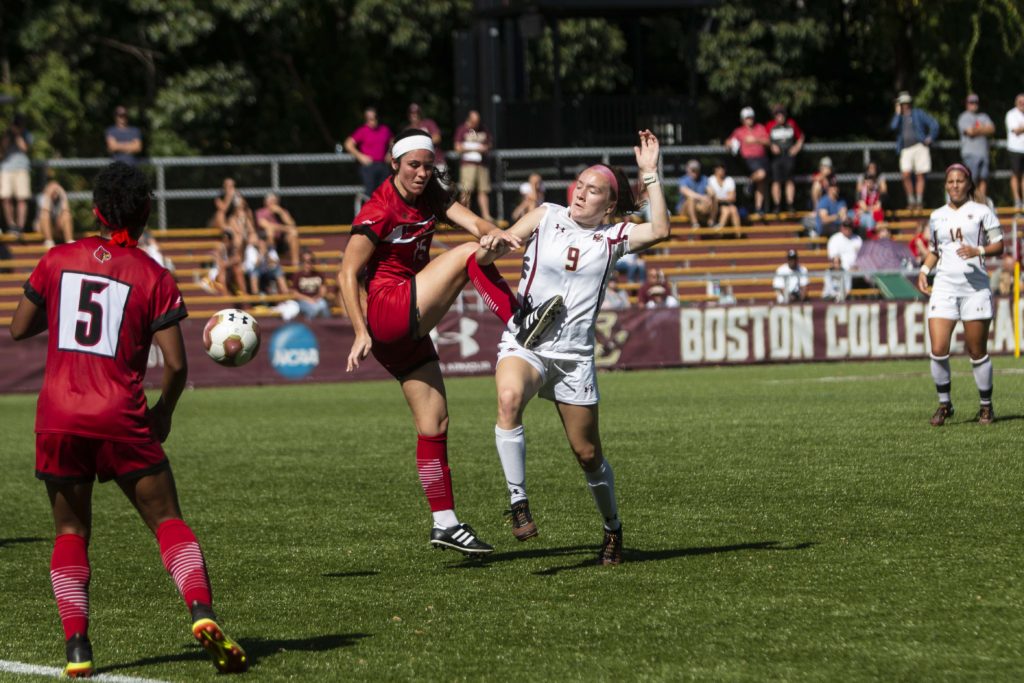 BC Concedes Twice in the First Half, Loses to No. 22 Louisville

On Thursday, Boston College women’s soccer bounced back from a loss to No. 6 Florida State with a commanding 4-0 shutout of Miami. The Eagles’ opponent on Sunday afternoon—No. 22 Louisville—provided another shot at a resume-defining win against a ranked opponent.

Even with an unbeaten record at home on the line, though, BC wasn’t able to crack Cardinals keeper Gabrielle Kouzelos until the 88th minute, and it was too little too late. A pair of first-half goals lifted Louisville to a 2-1 win, in which BC (8-2-1, 1-2 Atlantic Coast) almost doubled its visitors in shots.

In the early stages of the game, the Eagles looked to capitalize on forced turnovers and apply pressure on Louisville’s (9-1, 2-1) half of the field. Midfielders Gaby Carreiro and Jade Ruiters tested the Cardinals’ back line by sending passes toward forwards in the box. The Eagles’ aggressive mentality carried them to an early lead in shots, as they looked for any opportunity to get an early goal on the board.

Despite BC’s determined offense, it was Louisville that opened the scoring gates in the 14th minute when junior midfielder Emina Ekic received a pass at the top of the box and chipped a shot by goalkeeper Allie Augur for her fifth goal of the season. The goal marked the first time this year that the Eagles did not score first in a game.

Just minutes later, BC forward Olivia Vaughn nearly evened the score when a creative touch freed her in front of the net and gave her a chance on net. Her ensuing shot beat Kouzelos and seemed to hover in the air before finally bouncing off the crossbar and away from goal. The shot was one of three for Vaughn in the first half, as the senior continued to search for the back of the cage after her two-goal performance against Miami.

The Eagles fell into a deeper hole with 13 minutes left in the half, though, after a costly BC turnover in its own half turned into a Louisville a 2-on-1. Ekic slotted a pass through to teammate Delaney Snyder, and she made no mistake in tucking a shot by Augur’s outstretched arms and into the far corner. BC went into the break leading, 13-4, in shots but trailing by two goals—the first halftime deficit it had experienced this season.

If the Eagles were fazed by the halftime score, it did not show in the second half. BC came out of the locker room looking motivated to attack on offense and get back in the game. Its efforts in Louisville territory led to the Eagles being awarded nine corners in the second half alone. Carreiro and Ruiters continued to whip the ball into the box, but Kouzelos and the Louisville defense stood tall and never faltered under the continued pressure.

While the BC offense looked to find the net in the second half, Augur kept the Eagles in the game with her stellar play in net. The freshman made multiple confident plays, highlighted by a fantastic diving save to stop a sure goal on a great chance for Louisville. Later in the half, with time dwindling down and BC still trailing by two, Augur made another strong play when she shut down a Cardinals scoring opportunity right in front of the goal mouth.

With under two minutes left in the half, BC made the game interesting when it was given a penalty kick after a jump ball led to a foul in the box. Carreiro stepped to the spot with the game on the line and calmly placed a shot away from a diving Kouzelos and into the lower left corner for her third goal of the season. The goal left the Eagles down one with a minute left, and they had one last chance when they received their 12th and final corner. The ensuing cross from Carreiro was well placed, but BC’s attackers could not find a clean shot as the ball bounced in front of the net and ended up in Louisville’s possession.

While the Eagles have lost two of their last three matches, the quality of their opponents has been undeniably high. But in order to get back to the postseason, they’ll have to find a way to steal these kinds of games, as the path doesn’t get any easier. BC will have a slightly easier stretch with road games against North Carolina State and Pittsburgh over the course of the next two and a half weeks, both unranked foes, but if they stumble into the back half of the season it could be a long few weeks for Jason Lowe’s side.