Himes: Last Chance to Be Loud

Nearly every song on The Beatles’ Abbey Road is so eminent, so utterly recognizable, that we rarely remember that it was recorded by real people. It’s acclaimed such a high status in society that it’s ingrained in our minds—we can instantly picture the album cover, and most can name a handful of songs off the record.

Abbey Road was just reissued for it’s 50th—yes, 50th—anniversary, and the nature of the changes made remind the listener that four humans worked through these songs line by line, slowly, and not without disagreement. It brings an exalted album down to our level, where we can open the door and peer inside to get a better grasp on what it’s all about.

Abbey Road might be the first album I listened to in full. “Mean Mr. Mustard,” much like “Silver Hammer” and “Octopus’ Garden,” was a sigh of relief as a child—it seemed like it was written for a kid. And as far as I was concerned, all of them were—they were written just for me, skipping over half the songs on the album so I could hear the “bang, bang” of “Maxwell’s Silver Hammer” once again. “Here Comes the Sun,” a track that has punctuated my 21 years on earth at various points, is a song I loved back then and love even more now. I always treasure the image of George Harrison writing the tune on Eric Clapton’s back porch, and I love the song when the Boston “ice is slowly melting.”

But, as such pervasive music has a tendency to do, the album’s meaning changed as I grew. I couldn’t care less about “Octopus’ Garden” as a senior in college—but suddenly the triage of songs at the end of the album is one of my favorite pieces of music to listen to. The steady, unwavering, repetitive lyrics of “Carry That Weight,” switching abruptly without transition to “The End,” flowing right into the intricate simplicity of “Her Majesty” might be the best ending to any album, ever.

And I stand by that statement completely. Even more easily-forgotten songs such as “You Never Give Me Your Money” have been introduced in my rotation more recently—lines like “Oh, that magic feeling, nowhere to go” take on a whole new meaning when you virtually have no free time, even on weekends.

Songs I once overlooked—“Oh! Darling,” “Because,” and “I Want You (She’s So Heavy)”—are now heavily featured on my playlists. The rolling guitars in the latter songs never fail to captivate me—the revolving instrumentals of “Because,” accompanied by the group’s near-haunting harmonies spin around in my head all too often. “I Want You” has played an even bigger role in my life, appearing on what I’d imagine is nearly every playlist I’ve ever made for myself. The point at which a heavily bogged-down, trudging-through-quicksand feel evolves into a more bluesy, smooth song is impressive, but when John kicks in with the dramatic lead guitar, it feels like the most organically-executed instrumental drop you could possibly hear. And then it all ends, so abruptly you might check to see if the CD has a scratch or if your Wi-Fi went out. The song is indeed “so heavy,” and it gets me every time. All eight minutes of it.

During the new “I Want You (She’s So Heavy) 2019 Mix,” the listener can hear a neighbor asking the group to turn down the music. After deciding they’ll try the next take quietly, John exclaims, “Okay… one last chance to be loud!,” nearly foreshadowing the split of the group soon after the release of Abbey Road. The album was indeed their last chance.

My dad’s old vinyl copy of Abbey Road sits on a ledge in my room. It’s one of many physical albums in there, but is easily the most recognizable. I don’t think I can argue that it’s one of the best albums of all time, as some might. I can’t even tell you it’s my favorite Beatles album—I think they’ve done better. But it’s an iconic album nonetheless, one that showcased the most influential band of my childhood in its final moments and has lived and evolved with me for two decades, and likely will continue to do so for the rest of my life. And I’m definitely not the only one. 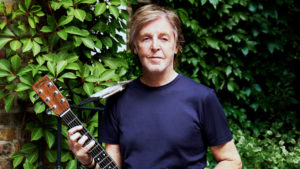 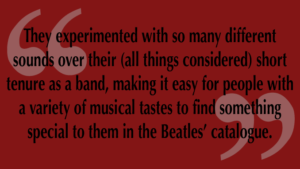