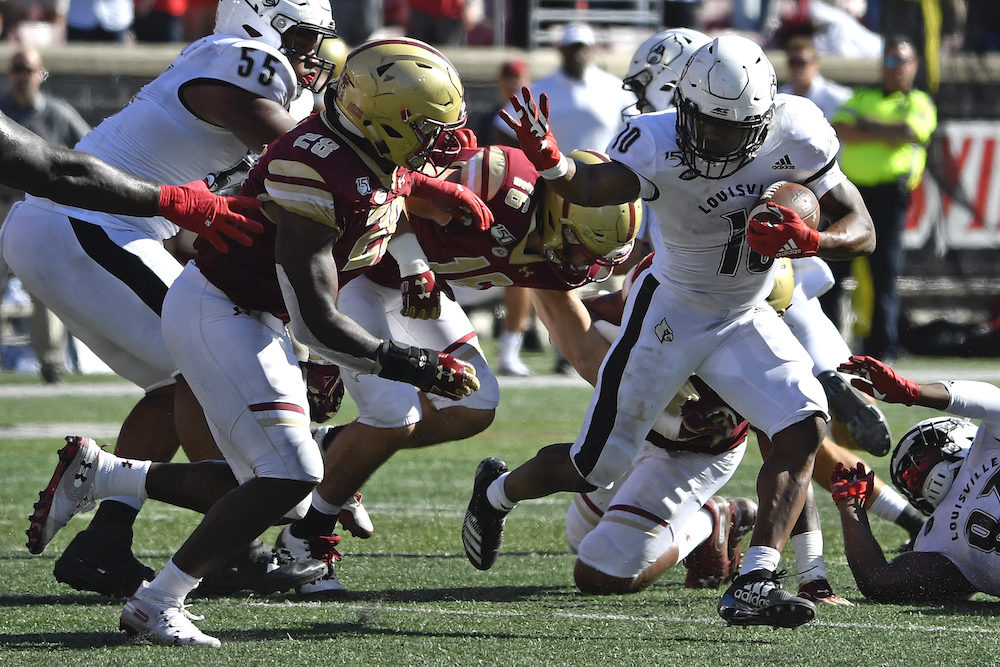 On Louisville’s fourth play from scrimmage, freshman running back Javian Hawkins took a handoff and found a big hole, ripping off a 47-yard gain that put the Cardinals in business at the five-yard line. It was just a harbinger of things to come for Boston College football and its defense.

The Cardinals finished the game with 664 total yards of offense, and manufactured big play after big play. In the end, it was too much for the Eagles—who lost quarterback Anthony Brown to a knee injury in the second quarter—and backup Dennis Grosel to overcome. BC took the lead with 3:32 to play, but Blanton Creque buried a game-winning field goal with just over a minute left. Louisville snapped a nine-game ACC losing streak and beat the Eagles, 41-39.

In a Week 5 loss to Wake Forest—which entered ranked 10th nationally in total offense and 28th in scoring—the Eagles (3-3, 1-2 Atlantic Coast) allowed just 440 total yards and 27 points. Saturday, the Cardinals (3-2, 1-1) nearly surpassed both of those numbers in the first half. Whether it was through the air or on the ground, BC’s defense simply couldn’t stop Louisville’s option attack. After Dillon fumbled while trying to fight for extra yards on 3rd-and-1 from the Cardinals’ four-yard line on the Eagles’ opening drive, Micale Cunningham and Louisville immediately went to work.

Cunningham fired a pass over the middle to Dez Fitzpatrick for a 23-yard gain, then “Playstation” Hawkins took a handoff over the left side and burst through a hole for 47 more yards to set up Louisville on the BC five-yard line. Two plays later, Cunningham kept the ball on an option play, and juked Mehdi El-Attrach in the backfield before strolling in for a three-yard touchdown.

The chunk plays just kept on coming. Cunningham lofted a ball over the top to Seth Dawkins, who ran by the attempted tackle of El-Attrach for a 59-yard touchdown on the Cardinals’ next possession to put Louisville back on top, 14-7, with 5:14 left in the first quarter.

Brown hit Zay Flowers for a 53-yard gain on BC’s next possession to put the Eagles back in Cardinals territory, but injured his knee two plays later while trying to cut upfield on a quarterback draw. The redshirt junior, who also suffered a season-ending right knee injury in 2017 on a similar play, did not return to the game.

Enter Grosel. The redshirt sophomore, who finished the game just 9-of-24 for 111 yards despite throwing three touchdowns, connected with Korab Idrizi on a 10-yard touchdown pass to tie the game.

The 14-14 scoreline didn’t last long. Hawkins—who came into the weekend averaging 5.9 yards a rush and finished with 25 carries for 172 yards—kept finding holes, cutting back for a 32-yard gain that set up Louisville’s third touchdown of the game.

Even penalties didn’t deter the Cardinals back for long. Rodjay Burns took a punt all the way back to the Eagles’ five-yard line, but the explosive return—which featured several missed tackles from BC—was whistled back for holding, backing Louisville up to its own 20. Two plays later, though, Cunningham dropped back and found Dawkins on a 77-yard completion that put the Cardinals right back inside the five. Hassan Hall punched the ball in for a six-yard score that put Louisville up, 28-14. It appeared that the game was getting away from the Eagles.

But Grosel and the offense—which netted just two total yards on two drives after Brown’s injury—created a scoring drive when BC needed it most. A 31-yard completion to Jake Burt up the seam got the Eagles moving, and with BC in the red zone, Grosel took a snap and rolled to his left before firing a dart to Kobay White for a 13-yard touchdown.

The drive, which covered 70 yards in nine plays and took just 1:16, even ended with an improvised two-point conversion. Grosel bobbled the snap, and was forced to roll to his right, but found Hunter Long to salvage the botched play and cut the Louisville lead to 28-22 at halftime.

The Eagles’ offense repeated the feat to open the third quarter. After BC’s defense forced a rare three-and-out, Grosel and Co. methodically marched down the field and converted on 4th-and-1 from the Louisville 35, thanks to a quarterback sneak. Three plays later, Grosel found Idrizi in the end zone on a seam route for a 19-yard score, giving BC its first lead of the game, 29-28.

Unfortunately for the Eagles, the defense wasn’t able to replicate the success it found on the first possession of the third quarter. A 41-yard throw to Fitzpatrick—one of 12 Louisville plays that gained 20 or more yards—put the Cardinals right back in the red zone. Creque then kicked a 34-yard field goal to reclaim the Louisville lead after a pair of penalties pushed the Cardinals from the two-yard line all the way back to the 27.

On Louisville’s next possession, it was Evan Conley—a true freshman that rotated in with Cunningham throughout the game—who led the Cardinals down the field. After Grant Carlson’s punt pinned Louisville at its own four-yard line, Conley didn’t panic. Instead, the freshman calmly picked apart the BC secondary, moving 96 yards across 13 plays and converting four third downs along the way. He finished the drive with a 23-yard touchdown to Fitzpatrick, who broke out of the attempted tackle of Brandon Barlow en route to the end zone.

The Eagles trailed, 38-29, and after Grosel threw his only interception of the day while attempting to find David Bailey, things once again looked bleak. But the defense responded by forcing a three-and-out, and Travis Levy took an end-around straight to the end zone for a 37-yard touchdown, once again getting BC within one score.

Conley threw long to Fitzpatrick on the ensuing Louisville possession, as BC finally manufactured some pressure with a Jahmin Muse blitz, and the Eagles got the ball back with 7:29 to play. The drive that followed, while not perfectly executed, was certainly gutsy.

Facing 4th-and-inches from Louisville’s 48-yard line, BC lined up to go for it, but Alec Lindstrom was whistled for a false start. Cognizant of the Eagles’ defensive struggles, BC head coach Steve Addazio elected to go for it anyway, and Grosel responded by rolling out and finding Kobay White for an eight-yard gain and a first down. The Eagles’ offensive momentum stalled at the 28-yard line, after Flowers’ trick play pass intended for Grosel fell incomplete, and Addazio elected to send out Boumerhi for a 45-yard field goal. The graduate transfer buried the kick, putting BC on top again.

But despite the offense’s best efforts, it was Louisville’s balanced attack that got the last word. Hawkins showcased his trademark explosiveness, bouncing outside for 28 yards to the Eagles’ 22-yard line, and Creque nailed his game-winning 41-yard try. BC’s last-minute drive came to a screeching halt after Grosel misfired on 4th-and-2, and the Cardinals started to celebrate their first ACC win since 2017.

Brown’s injury will likely be the story moving forward, and for good reason, but ultimately Grosel still put up 32 points while leading the offense, enough for the Eagles to win the game. The BC defense, which struggled to generate pressure on Conley and Cunningham, simply couldn’t cover any of Louisville’s playmakers. Tutu Atwell, Dawkins, and Fitzpatrick all finished with more than 100 yards receiving, and it didn’t help that the Eagles’ tackling struggles continued.

If Brown’s injury keeps him out for an extended period of time, BC’s defenders will need to step up. After all, the Eagles can’t reasonably expect Grosel, who has never started a game at the college level, to lead an offense that scores 30-plus points a game. The problem is, Sheridan and the defense have shown little to suggest that a step forward is coming. In fact, Saturday can’t be thought of as anything but a massive step back.