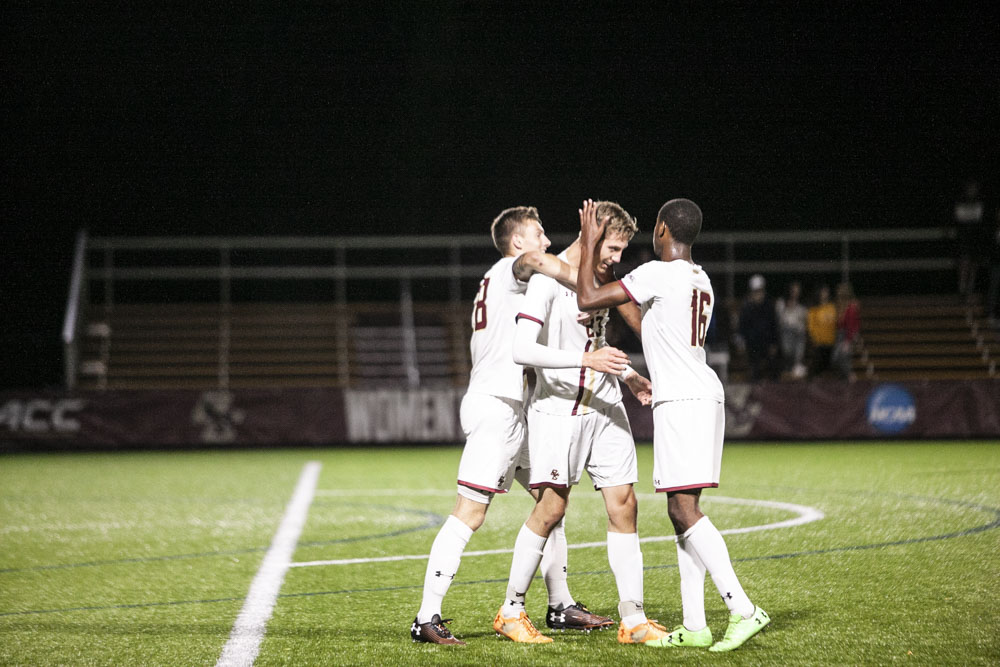 Following consecutive first-half goals that were scored in a span of 10 minutes, Boston College men’s soccer and No. 3 Wake Forest found themselves in a 1-1 deadlock in the final stages of Friday night’s game. Last season, the two teams were in a similar situation, with the Demon Deacons escaping with a win, thanks to a 75th-minute goal.

This time around, though, Eagles freshman Stefan Sigurdarson—who scored the game’s first goal—had other ideas. The forward from Iceland one-touched a pass from teammate Mike Suski past Wake Forest keeper Andrew Panneneberg in the 83rd minute, handing BC an impressive 2-1 victory on its home turf.

The game began with BC (6-2-2, 1-2-1 Atlantic Coast) playing fast and aggressive, with players stretching the field and putting the Wake Forest (8-2, 3-1) defense under duress early. This up-tempo style of offense led to the two early shots on goal, and the Eagles’ first score. Sigurdarson dribbled down the right side of the pitch, then sent a low, hard shot past Pannenberg in the 10th minute.

BC’s offense quickly stagnated after those two shots, however, as they did not get another shot on goal in the opening half. The remainder of the first half was dominated by the Demon Deacons. The ball rarely left the BC side, allowing Wake Forest multiple second-chance opportunities. It didn’t take long for the Demon Deacons to answer Sigurdarson’s goal, as Machop Chol headed in an equalizer in the 26th minute off a pass from Alistair Johnston—who scored the game-winner against BC last year.

The second half did not start any better for the Eagles. Wake Forest made clear adjustments to deal with its opponents’ weaknesses, using a physical press style that started giving BC trouble in the passing game. The Eagles’ defense was letting Wake Forest players run wide open, with the ball constantly finding its way back to the BC side. A clear standout for the Eagles in all this chaos, though, was the goalkeeper. Christian Garner, who was consistently under pressure throughout the game, came away with five saves through the course of the night.

Locked up at one apiece, the game was quite physical. The two teams registered eight yellow cards, with six on the Eagles alone. Neither side was able to crack through, though, despite good chances from both teams. Eventually, it was BC that broke through in the 83rd minute, as Suski fed Sigurdarson for the game-winner. The Eagles got a yellow card as the bench celebrated, but it was well worth it in the win.

It was a shocking upset of a team that entered without a loss in conference play. Even more surprising, BC was coming off a scoreless draw with Merrimack earlier in the week. Sigurdarson’s performance was nothing short of brilliant, as the team leader in points recorded his second game-winner, replicating his late strike against Rhode Island. The Demon Deacons are arguably the best team the Eagles will play all year, and head coach Ed Kelly’s side came out on top in a gritty defensive battle that should provide plenty of motivation in the games to come.