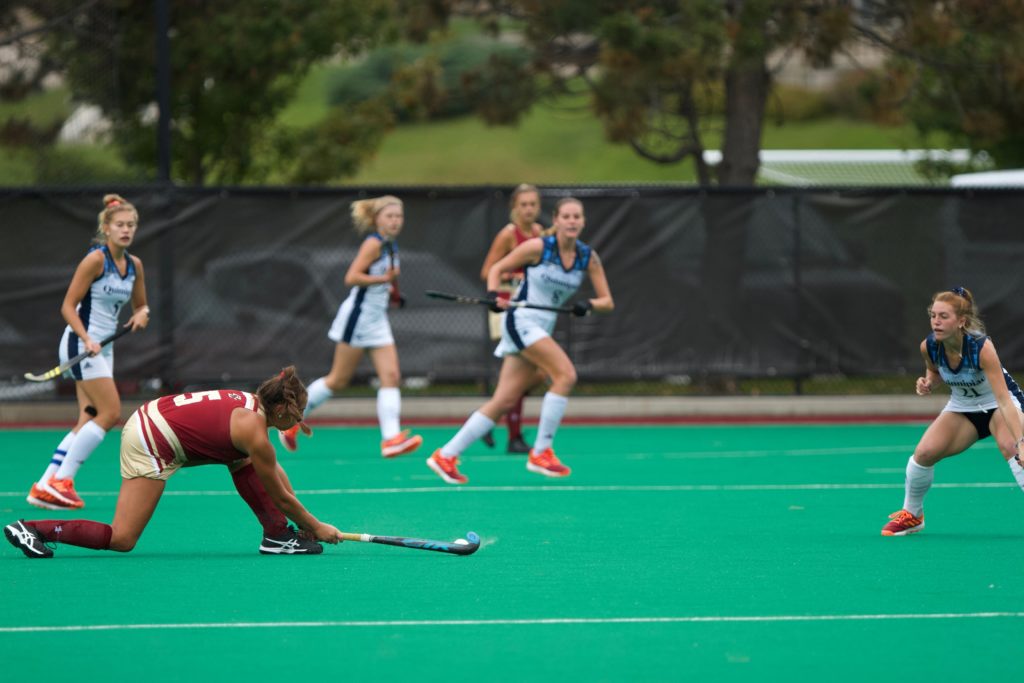 Sunday afternoon marked the fifth straight game where Boston College field hockey struck first blood. Yet, unlike the last three contests—all of which were decided by just one goal—there was no drama. The Eagles never fell behind Quinnipiac and defeated the Bobcats by a score of 4-0.

The No. 13 Eagles posted their second consecutive shutout to bring both their overall and ACC records over the .500 mark for the first time this season (6-5, 2-1 Atlantic Coast). Even though the Eagles led by a score of 1-0 at the end of the first quarter, head coach Kelly Doton said after that she “felt that we came out really, really slow.”

The goal came from junior midfielder Fusine Govaert on a corner shot. Govaert received a pass from freshman forward Margo Carlin and sent a rocket past the Bobcats’ (3-8) netminder for the opening goal of the game and her sixth of the season. After the scoring play, the Eagles had a few more chances to add to their one-goal advantage, but were unable to beat Hedda Bierman-Ratjen, Quinnipiac’s freshman goalie. In the huddle following the period, Doton made it clear she wanted more from her team, despite holding the lead.

BC played strong for the first 10 minutes of the second quarter behind sturdy offensive pressure and solid midfield defense. In the final few minutes of the frame, the Eagles had to halt a power surge from the Bobcat offense. Senior goaltender Sarah Dwyer stood on her head as she made multiple diving saves on a trio of Quinnipiac corner shots.

Dwyer made a total of six saves on the day, en route to her second straight shutout performance. If not for her efforts, the Eagles could have gone into the break tied despite controlling play for most of the game.

“She earned both of those starting jobs, and she did a hell of a job in the cage for us,” Doton said.

The Eagles came out firing in the second half and were able to score two goals off corners to extend their lead to 3-0. BC’s second scoring play of the day was recorded by sophomore Nell Webber, as she tapped it in after a pass from Govaert for her second goal of the season. Just 29 seconds later, the Eagles were back on the score sheet. In a very similar play, Charlotte Von Huelsen deflected a pass from defender Sky Caron into the back of the net for her third goal of the season. After finding the back of the net, the Eagles shut down the Bobcats’ offense—in fact, Quinnipiac didn’t attempt a single shot on goal in the period.

In the opening two minutes of the final quarter, the Eagles added to their lead. Carlin, BC’s leading goal scorer, laced a backhand shot into the back of the net for her 11th goal of the year. Neither side scored the rest of the way, and the Eagles were able to see out the 4-0 victory.

Although BC got the job done on Sunday during its non-conference matchup, Doton believes there is room to grow.

“I still think our defense,” the fifth-year head coach said when asked what could be improved. “When the attack starts to flow and when they’re going pretty well, it’s going great. Our press needs to clean up the defense. [There’s] no easy games from here.”

The Eagles have strung together eight straight quarters of scoreless play with Dwyer in net, but that’ll be a tough task to replicate in their next matchup. BC is hosting No. 19 Harvard on Thursday, a Crimson side that has rattled off six straight wins and is scoring 2.8 goals per game.