Despite Controversy, ‘Joker’ Is Milestone for Superhero Genre

Joker is one of the most controversial movies of 2019 so far: Following its screening at the Venice Film Festival in September, critics alleged the film was sympathetic to involuntarily celibate, or “incel,” culture, and that the movie’s visceral violence may inspire copy-cat acts of violence. (This concern without a doubt stems from the mass shooting that occurred at a 2012 showing of The Dark Knight Rises in Aurora, Colo.)

As a result, there were increased levels of security at screenings across the country. At the press screening at the AMC Boston Common on Tuesday, attendees were required to wear wristbands, an unusual level of security for the theater. Regardless, the film won the Venice Film Festival’s top award, the Golden Lion, and intrigue translated to massive revenue at the box office during the opening weekend.

Joker mirrors our current world and speaks to some of the problems of modern society, including wealth inequality and a growing sense of societal abandonment that some feel. While this particular theme still lends itself to a cohesive narrative, setting it in the modern day may have been a better decision for a movie with the lofty aim of creating a succinct criticism of contemporary society. Director Todd Phillips explained that the choice was deliberate to be sure that Joker stood apart from the more recent DC cinematic universe that Warner Bros. is attempting to build.

Joker is a gritty origin story of the iconic Batman villain and shows the slow descent of one man—neglected by society—into the deranged clown prince of crime we are all familiar with. The movie takes place in 1981 Gotham, a city in the grip of a severe economic downturn. Arthur Fleck (Joaquin Phoenix), a mentally ill man, is just struggling to make it by and look after his mother while he aspires to become a stand-up comedian. The Joker’s mental conditions are never specified, but we learn early on that he has a condition which causes him to laugh hysterically during moments that he doesn’t actually think are funny.

Joker’s last big screen appearance came in 2016’s Suicide Squad, a film in which Jared Leto’s portrayal received a mixed reception from fans. Joaquin Phoenix, however, shines as the titular character of Joker, with a performance that can hold a candle to Heath Ledger’s Academy Award-winning portrayal of the character in The Dark Night (2008).

The Joker’s laugh causes emotional pain for Arthur, and this comes across with stunning clarity during the darker scenes involving the troubled character—Arthur often looks like he is in physical pain when he is laughing, which helps to externalize the internal pain the character is experiencing. Joker’s mental illness is woven intricately into the narrative, leaving the audience to question what it is supposed to believe: Several events are revealed to be manifestations of Arthur’s damaged psyche which will certainly leave viewers with questions to ponder after the movie.

The rest of the cast, including Robert De Niro and Frances Conroy, all turn in intriguing performances. De Niro plays Murray Franklin, a fictional talk show host à la Jay Leno. Joaquin Phoenix, however, is the main force carrying this film. The cinematography is excellent and captures a highly stylized iteration of Gotham as a place of staggering wealth inequality. The score, which was crafted by Icelandic composer Hildur Guðnadóttir, is superb and helps to bring the film to life by capturing its mood and themes.

As a Batman-adjacent film, the Wayne family is also featured. In the film, Thomas Wayne (Bruce Wayne/Batman’s father), played by Brett Cullen, is running for mayor of Gotham. His portrayal in Joker is very different from his typical comic book representation. In the film he is rather antagonistic, looking down on Gotham’s lower classes. In the comic books, Wayne is usually a beneficent and philanthropic figure dedicated to making Gotham better for everyone. While these changes serve the story that Joker is trying to tell quite well, they come at the expense of fan discontent.

Joker is a dark character study about one man cast aside by society and his gradual descent into madness. As a spiritual sequel to the Christopher Nolan Batman trilogy, Joker is sure to be another milestone for the superhero movie genre. 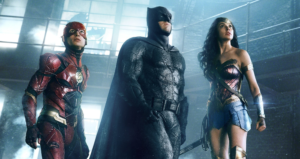