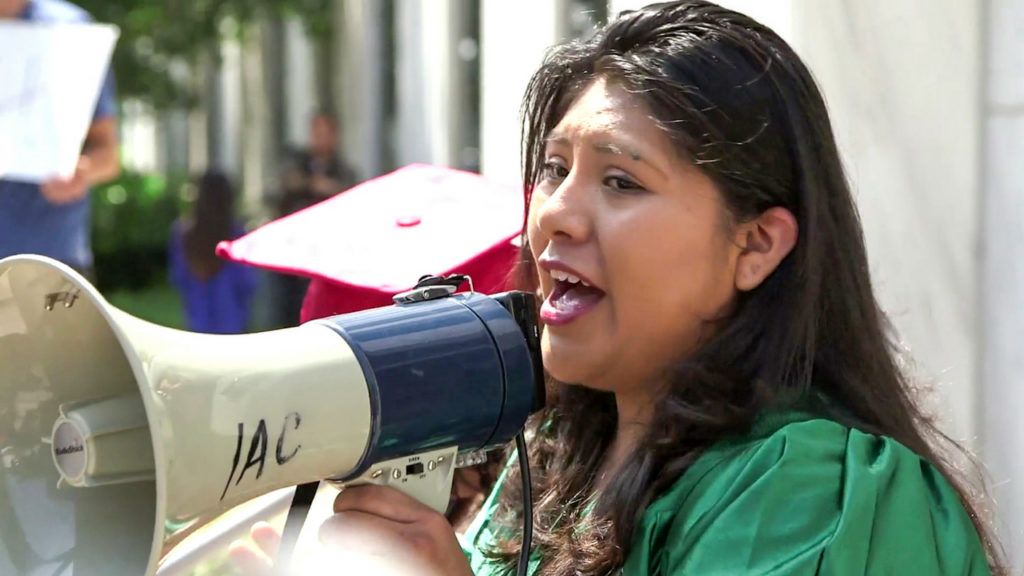 Students Discuss How to Help DACA Students at Film Screening

The American Dream has been historically deemed as the ideal life pursuit in the United States. It has motivated many individuals from around the world to reside in the States, but the irony is that doing so has become an American Nightmare. Some struggle to survive daily, and there are limited opportunities for any kind of upward social mobility for those living in poverty. That said, some American policies make financial security and, consequently, the American Dream difficult to actualize. This is especially the case for undocumented immigrants.

The documentary The Unafraid humanizes the individuals who have limited access to opportunities for upward mobility in American society. A screening of the documentary took place in Stokes 195S on Oct. 2 and was sponsored by the Center for Human Rights and International Justice. The screening was prefaced with a handout that listed general information about the Deferred Action for Childhood Arrivals (DACA). DACA is a policy created by President Barack Obama in 2012 that provides temporary protection from deportation for undocumented immigrants who come to the United States before the age of 16. As explained in the documentary, however, DACA’s “protection” does not offer full security.

Raquel Muñiz, assistant professor in the Lynch School of Education and Human Development and liaison to the Boston College Law School, welcomed the audience to the event and introduced two students who were providing commentary for the documentary: Armando Guerrero Estrada, a doctoral student of theology and education at the BC School of Theology and Ministry, and Carlos Aguilar, a doctoral student of culture, institutions, and society at the Harvard School of Education. The two provided information and their opinions about DACA before the documentary was played.

The Unafraid follows three undocumented students from Georgia: Alejandro, Silvia, and Aldo. The film showcases their fight for the opportunity to obtain a college education. Because of DACA, these students are banned from attending the state’s top-five universities and do not qualify for in-state tuition at any other public college in Georgia. Instead, they are considered international students and must pay exponentially higher tuition for class credits than in-state tuition.

As the film follows the three students over the years leading up to the 2016 presidential election, the lives of these three students’ families are unveiled. We see how these students make sacrifices and work incredibly hard to financially support their families. The film sheds light on these families’ tender relationships, reaching the heart of the audience and encouraging them to understand how these policies affect these families not just financially, but emotionally as well.

After the end of the film, Muñiz opened up the panel for follow-up questions to debrief what was shown in the film. Many of the audience members who participated in this discussion agreed that it was a very moving documentary and that they felt privileged to be at BC. The film inspired people to want to take action, and both Estrada and Aguilar offered many ways of doing so.

Many asked the questions, “How do we help? What can we do at BC to make a change?” One audience member, without explicitly saying so, seemed to acknowledge the limited number of white members in the audience.

“I feel rage. This is becoming a social rage,” he said.

But then, a BC student openly reflected on her privilege as a white woman and how the film made her realize that she takes it for granted. In response to this, Aguilar advised her to use her whiteness in spreading information about undocumented and “DACAmented” students, in order to promote change.

As the debriefing came to a close, the group was left with multiple suggestions to help BC’s campus become more aware and involved in addressing this current issue. Students and faculty can attend similar events or visit the Center for Human Rights and International Justice for other opportunities to get involved. A memorable scene from the documentary shows the students chanting, “The people united will never be defeated!” There is power in numbers, and one by one, the American Dream can once again become a reality.