Home » During Jesuit Self-Survey, BC Should Consider How to Better Serve Students from Lower-Income Families 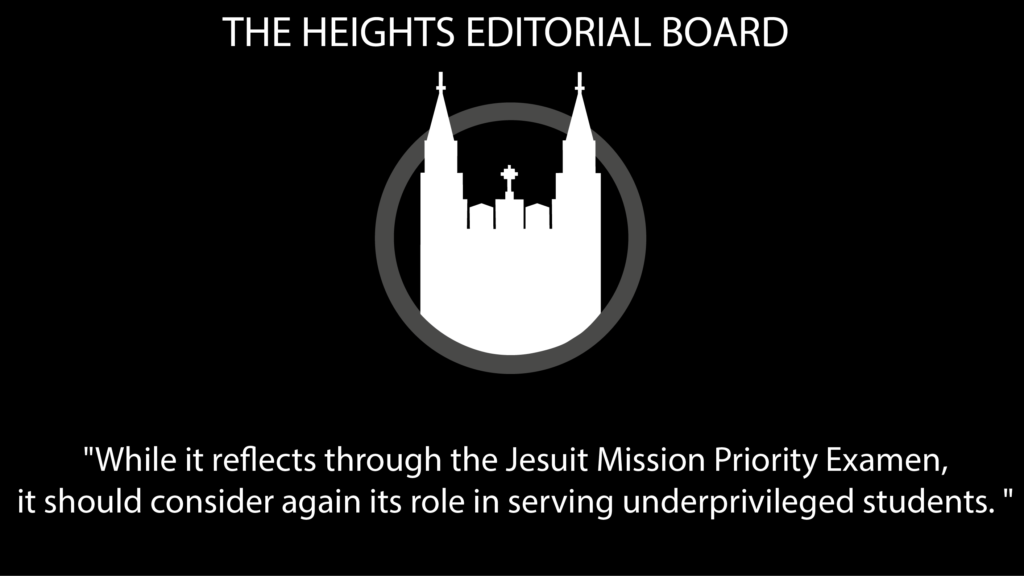 During Jesuit Self-Survey, BC Should Consider How to Better Serve Students from Lower-Income Families

Boston College is participating in a self-study as a part of the Jesuit Mission Priority Examen initiated by the Association of Jesuit Colleges and Universities. The study is designed as a self-reflective measure to assess how well Jesuit universities are demonstrating Jesuit ideals. Topics in the survey range from integrity to campus culture.

Jesuits and students at Jesuit schools are, in general, “encouraged to develop their God-given talents and use them in the service of others to help make the world a more just and humane place,” according to the University’s website. Jesuit values also include a commitment to service and helping the poor. There is not a direct question relating to the University’s treatment and inclusion of low income students on the survey, however, the issue is still a major one that the University should consider as it reflects on these Jesuit questions.

According to the Student Experience Survey, student rates of satisfaction as a whole were very high. Most BC students said that their education has given them a better idea of “what is different about a Jesuit education.” When broken down by socioeconomic background there is a difference in levels of satisfaction between wealthier students and low income students. In general, low income students rated the overall BC environment as less welcoming. Based on the Jesuits’ historical and moral commitment to the poor and underprivileged, however, BC could push itself harder to become a more value-based institution for its students from marginalized communities.

The University has recently decided to switch its admissions policy from early action to early decision. BC must try to reconcile this decision with its Jesuit values. An early decision program mandates that if a student is accepted to BC, then the student must attend the school. This can be an issue for low income families as they cannot compare financial aid packages from different colleges. The switch may also be more likely to encourage applications from wealthier students who need not consider financial aid packages. On its website, the University encourages only students who have “confidence in [their] family’s ability to meet the full cost of attendance with or without need-based financial aid” to apply early decision. The University expects to fill 40 percent of its 2024 class with early decision applicants. BC does, however, meet full demonstrated financial aid for admitted students, which is more in accordance with its Jesuit values.

According to The New York Times, BC is also one of the 38 universities in the United States that enrolls more students from families in the top one percent of income brackets (families making $630,000 per year and more) than it does from the bottom 60 percent of income brackets. Though this is not unusual among other top 40 colleges and universities, the current socio-economic makeup of BC is a stark contrast to BC’s founding as a place to educate the sons of Irish immigrants.

As a committed Jesuit university, BC prides itself on living out its Jesuit values every day. While it reflects through the Jesuit Mission Priority Examen, it should consider again its role in serving underprivileged students.