Home » My Culture Is Not Your Halloween Costume
Opinions, Column

My Culture Is Not Your Halloween Costume

As someone who is of Middle Eastern heritage, I dislike Halloween very much. It’s the time of year when my friend who once thought Pakistan and Syria were both bordering nations, who once asked me if I liked “Muslim food,” and who once expressed her sorrow about the war in my country (in Lebanon?) decides that this year she should dress up as sexy Jasmine from Aladdin. If I have to explain why the above sentences are offensive, then Boston College’s cultural diversity core class requirement has failed.

Cultural appropriation refers to the misuse of cultural elements, usually clothing, of one culture by another. There seems to be an uptick in instances of cultural appropriation around Halloween, in which people attempt to pretend to be something they’re not, such as a witch or vampire. Dressing up as someone that you’re not become an issue, however, when you dress up as a member culture that has a long history of oppression.  It is disrespectful because by using a culture as a costume diminishes the value of that culture. This can be seen in situations where white people wear dark makeup in order to look black, also known as black or brownface. Similarly, cultural appropriation is when a non-Christian person dresses up as a “sexy nun” for Halloween, or when a non-Muslim person wears traditional Saudi Arabian garb in order to look like a “Muslim terrorist”.

Halloween costumes are traditionally scary. We should not associate darker skin tones or traditional cultural garb with fear. We should not have ghosts and zombies and demons next to people in Saris or Hulu skirts. What does that say about those particular cultures? That they’re scary, primitive, beastly. There is an important difference between cultural appropriation and appreciation. Wearing a Sari at an Indian friend’s wedding is not the same as wearing it as a costume at a Mod’s Halloween party.

I’m sure many have seen the recent image circulating around the internet of Prime Minister Justin Trudeau in brownface. Don’t be like Trudeau. I cannot believe I feel the need to write this in 2019, but here it is: Altering physical features to appear to be of a different race for the sake of a costume is disrespectful and, quite frankly, ridiculous. Staying home on Halloween is better than wearing blackface. Blackface has historically been used to perpetuate degrading stereotypes about black people. Their blackness is not an accessory to take on or off whenever one pleases. Their identity is not a Halloween costume.

This is not an issue exclusive to white people. It applies to all races. People of all backgrounds have been guilty of this. Nobody should be mocked based on their race, national origin, religion, or disability, or living in a society with complete disregard for anyone else’s feelings. We can (and should) do better than the generations before us.

There is a huge difference between wearing cultural wear, such as a sombrero or a sari, and wearing a blue dress to look like Elsa from Frozen. There is a difference between dressing up as a Disney princess whose clothes are everyday clothes, and a princess whose clothes are someone’s cultural wear, or a costume that would require one to change their physical features to change one’s race.

When in doubt, students should put themselves into the shoes of their peers. How will my black friend feel if I wear dark makeup in order to look like Snoop Dogg? Avoid costumes that are everyday garb for other people. Dress up as a ghost, vampire, demon, etc.—the options are limitless. It’s extremely easy to avoid offending people, so this Halloween, let’s do just that.

Every year, UGBC sends out an email about how to “Dress with Respect” for Halloween parties. I suggest students actually read it this year, particularly if they’re not too sure about their costume. Halloween is a fun time of year, and it’s even better when we respect others and their cultures. Cultural appropriation should not be a Halloween costume—and that’s just common sense. 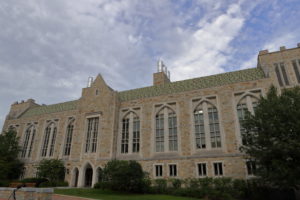