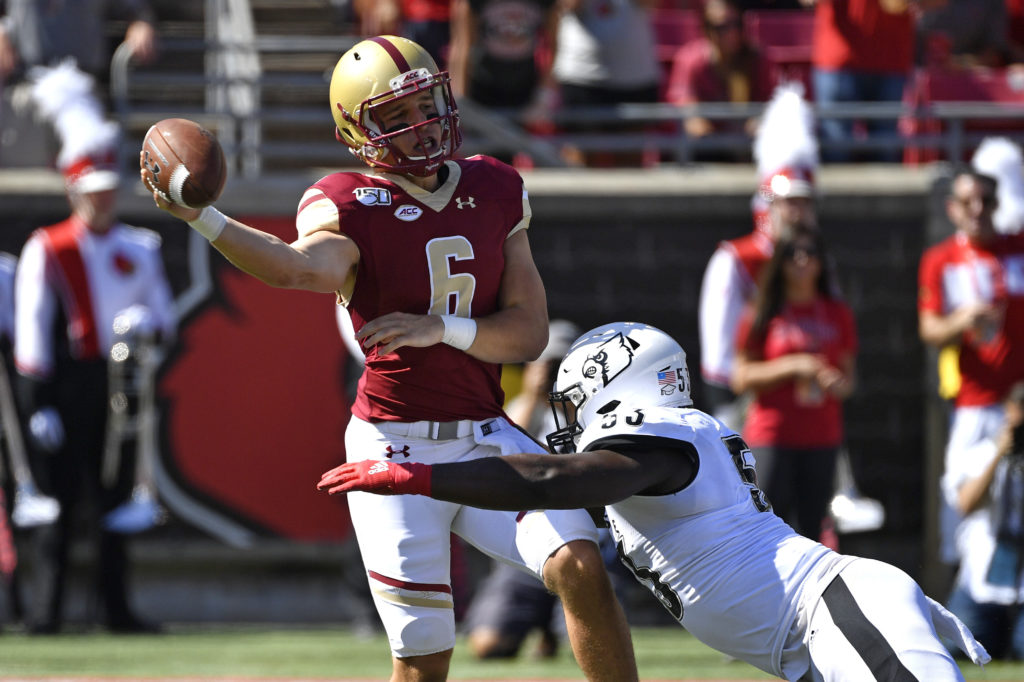 When Boston College football quarterback Anthony Brown exited Saturday’s game at Louisville with a left knee injury, all eyes turned to Dennis Grosel. One year removed from wearing the number 20 and filling out the bottom half of the six-player BC quarterback depth chart, the redshirt sophomore was suddenly the guy.

Grosel immediately tossed a touchdown pass, his first of three, and largely impressed the rest of the way. The Wiloughby, Ohio, native started 7-of-12 for 94 yards and three touchdowns (and a two-point conversion), turning a 14-point Eagles deficit into a third-quarter lead. Then, after hitting a bit of a speed bump and throwing his first career interception, he rebounded to guide the Eagles back within two points.

The following series, he made two gutsy scrambles for a combined 25 yards, as well as a clutch eight-yard pass to Kobay White to keep the drive alive on 4th-and-8, setting the stage for a potential game-winning 45-yard Aaron Boumerhi field goal. Unfortunately for BC, its defense couldn’t rise to the occasion like its backup quarterback. Louisville marched downfield and kicked a go-ahead field goal, before Grosel and the Eagles turned the ball over on downs to end the game.

Because BC was frantically playing catch-up, Grosel’s stats dipped down the stretch. He finished just 9-of-24 for 111 yards with three touchdowns and one pick—but also piled up 47 rushing yards on six carries. It certainly felt like he did more, though, considering that he led BC to 32 of its 39 points, keeping the Eagles in the game, despite their defense giving up 664 total yards, the most in program history.

Grosel, who had attempted seven total career passes before Saturday—including an improvised deep shot the week prior, following a botched fourth-quarter field goal snap against Wake Forest—was asked to pilot a comeback on the road versus a Cardinals team hungry for its first ACC win since 2017. Yet, for the most part, he looked unfazed by the pressure.

“Going through my head, it was just make the simple plays, keep the ball moving, keep getting first downs,” Grosel confidently told reporters, per BC Athletics. “I thought we did a pretty good job at that. I had trust in everyone else, and they all trusted me. That’s how it works.”

Grosel made the quarterback transition sound seamless—and on Saturday it mostly was. But you couldn’t say the same about the turnover the Eagles’ quarterback room faced this offseason.

Three of the six quarterbacks on BC’s 2018 roster transferred from the program, starting with Johnny Langan in late December. The former Bergen Catholic signal caller returned to New Jersey to play for Rutgers. It couldn’t have worked out much better for the redshirt freshman. McLane Carter—the Scarlet Knights’ Week 1 starter—is expected to be out the rest of the season with a concussion, Art Sitkowski is planning on redshirting, and head coach Chris Ash is gone. Now, the 6-foot-3, 232-pound dual-threat gunslinger is the starter under interim head coach Nunzio Campanile, who served as Bergen Catholic’s head coach during Langan’s Non-Public, Group 4 State Championship run back in 2017—the school’s first since 2004.

Five months after Langan’s transfer, third-string BC quarterback Matt McDonald left the program to reunite with offensive coordinator Scot Loeffler, now the head coach of Bowling Green. Last year, McDonald followed up a strong spring and three-touchdown Jay McGillis Memorial Spring Game by completing a combined 7-of-8 pass attempts in two relief appearances at the start of the 2018 campaign. Unlike Langan, however, McDonald wasn’t granted NCAA approval after submitting a waiver appeal seeking immediate eligibility for 2019. He’ll have to wait until next year to get a chance to make his first collegiate start.

E.J. Perry, on the other hand, is off and running in the Ivy League—literally. The former BC backup, who played in five games last season and was called upon to replace Brown for practically all of the Eagles’ College GameDay matchup against then-No. 2 Clemson, has rushed for 327 yards in his first three games at Brown. He’s also completed 63.1 percent of his passes for 765 yards and six touchdowns. In the season opener alone, Perry racked up 410 yards of offense and five total touchdowns, and he even recorded the second-longest scoring play—a 94-yard run—in program history.

A total of four former Eagles signal callers (Langan, Perry, Wade, Brown) from the team’s 2017-18 rosters have started a game this season, if you factor in former BC quarterback Darius Wade, who transferred following the 2017 season and began 2019 as Bowling Green’s starter.

At the moment, there is no update on Brown’s status, but the third-year starter was seen on the sideline with crutches for the final three quarters of Saturday’s game. The Eagles have a bye this week, but if the injury is anything like his 2017 torn ACL, Grosel will be the quarterback under center for the foreseeable future.

The Eagles only have three other players at the position: redshirt freshman Matt Valecce and true freshmen Daelen Menard and Sam Johnson III. Valecce redshirted last season, and his only appearance this year came late in BC’s blowout win over Richmond. Of the true freshmen, Johnson III is more recognizable, given that he’s the first quarterback ranked inside ESPN’s Top 300 to commit to BC during Addazio’s seven-year tenure. That said, Johnson III looks to be on track to redshirt this year, especially after a slow spring—the touted recruit completed just 2-of-7 passes for 25 yards and took one sack in this year’s Spring Game.

Grosel is a redshirt sophomore but graduated from St. Ignatius High School in 2016 and enrolled at BC as a preferred walk-on in January of 2017 before practicing with the Eagles that spring. He redshirted the 2017 season and didn’t see any time last year, yet beat out Valecce for the backup role this offseason.

While in high school, Grosel was a captain for both the Wildcats’ football and baseball teams. But he had more than just an arm. In addition to throwing for 1,959 yards and 18 touchdowns as a senior, he also rushed for 469 yards and 11 scores, earning All-Ohio honors in the process. Standing 6-foot-1, 220 pounds, Grosel showcased the ability to run the zone read and tuck the ball and run when necessary.

Luckily for BC offensive coordinator Mike Bajakian, Grosel fits right into the Eagles’ offensive scheme. Not only can he move the chains on the ground, but he’s also used to throwing on the run. Back in high school, Grosel was often asked by longtime St. Ignatius offensive coordinator Nick Restifo to roll out of the pocket, just as Brown has during his Eagles career. Grosel can drift outside the tackle box, plant his feet, and fire a pass to his receiver with relative ease.

He mirrored this play on Saturday at Louisville. After driving downfield in the two-minute offense, Grosel took the snap out of the shotgun, rolled left, set his feet, and rocketed a pass to Kobay White for a touchdown just before the half.

But he doesn’t need to square his shoulders to find his receivers. Following his touchdown pass to White, he bobbled the snap on the ensuing extra point, only to then pick up the ball, sprint right, and hit Hunter Long for the two-point conversion. Even more notable, with about five minutes to go in the game and his team trailing by two, the redshirt sophomore faced a 4th-and-6. He took the snap, moved right, and—with two oncoming Cardinals defenders—whipped a pass to White, keeping the Eagles’ series alive.

Going forward, Grosel’s dual-threat capabilities will help Bajakian. Already, the first-year Eagles offensive coordinator has dialed up a few designed quarterback runs for the underclassman. And Grosel isn’t one to shy away from contact.

As the top rushing offense in the ACC, BC currently averages 253.2 yards per game on the ground. That’s a safety cushion for any inexperienced quarterback. Ultimately, though, Grosel’s success will be dictated by his accuracy—he only completed two of his final 12 pass attempts during Saturday’s loss. When BC’s signal callers have been off the mark the past few years, the offense has grinded to a halt, partly due to the unit’s up-tempo nature.

If Brown’s out for extended time, like he was in 2017, BC will need serviceable quarterback play to compete, especially with a defense ranked 104th in yards allowed per game. All of the cards have fallen in place for Grosel—a no-rating former walk-on from a Jesuit high school that, as of last year, found himself in the bottom half of the Eagles’ depth chart.

Ten months ago, it looked like Grosel might never play a down for BC. Now, the balance of the Eagles’ 2019 campaign could very well rest on his shoulders.