The goal for restaurants has always been to raise the bar, but for Longfellow Bar, they take the adage quite literally. Elevation of typical bar food and drinks, as well as physical elevation from the hustle and bustle of Harvard Square, allow it to think outside the box—or the margarita glass.

Longfellow Bar resides in the elegant, red-brick, colonial-style Brattle Hall, sharing a space with its sister restaurant, Alden & Harlow. The bar serves to function as its more casual and welcoming counterpart, with a smaller, cozier space and a bar both upstairs and downstairs. The candlelight and exposed lightbulbs along with the contemporary yet rustic touches give the bar an inviting feel. A large blueprint of Brattle Hall pays homage to the memories of the past as new ones are created on 40 Brattle Street.

The multiethnic dishes on the menu illustrate owner Michael Scelfo’s multifaceted commitment to a personal yet eclectic style of dining. He emphasizes the importance of finger food, so silverware was nowhere to be found unless asked for, but moist toilettes were in abundance. Bar food standards can be found—like the Cotechino Pigs N’ Blankets—but they’re enhanced to become new versions of themselves.

Other menu items, such as the Mortadella Musubi (basically a sweet-but-salty sushi with ham in it), are simultaneously foreign and familiar, welcoming all to try them. A careful balance between salty and sweet appears in most dishes here, with a sauce served to accent most of the dishes served. The most popular dish is the Short Rib Kitfo, an Ethopian-inspired minced meat, which further helps to emphasize the importance of shareable finger food in the relaxed bar atmosphere.

While I could not try the drinks at the bar, Dan Pontius, Longfellow Bar’s beverage director, noted that one of the most popular beverages is the spicy margarita. Initially, he was doubtful of the jalapeno syrup, but after trying the drink prepared by a staff member, he absolutely loved it.

Visitors also enjoy the Fire-in-the-Hole, a clarified peach Cordial. The emphasis on sourcing local and seasonal ingredients from the New England area is paramount to the experience at Longfellow Bar. For Fire-in-the-Hole in particular, local peaches are selected and charred to create the perfect balance of flavors with some Irish whiskey.

Customers can either decide to sit at traditional bar seating or small two- or three-seat tables where drinks can be enjoyed by candlelight. An outdoor balcony overlooking the street is also available for those few months of warmth in Boston.

One of the events coming up for the business is the ever-popular holiday among beer drinkers, Oktoberfest. Longfellow Bar, along with many other businesses in the area, will be setting up a tent for the parade and festivities in Harvard Square. They pick a local brewery to sponsor, keeping the beer on tap. Maintaining its commitment to local ingredients and vendors, the bar oftentimes will go through six kegs of beer during the festivities. Typically, it will also serve a form of protein paired with the beer to commemorate the celebration.

Longfellow Bar tries to serve a variety of people in the Harvard area—from college students to tourists to a wandering Salman Rushdie (he dropped by the bar once after a lecture at Harvard)—in an unpretentious manner. The restaurant’s goal is to create a wonderful experience within the bar with, as Pontius says, an “emphasis on clarity of flavor and hospitality.”

As reflected in their diversity of plates, they adapt to the transient nature of their customers who come from all over to visit the Harvard area. The Longfellow Bar, elevated as it may be, wants its visitors to take their experience home. 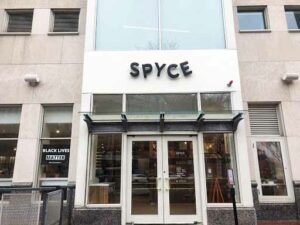