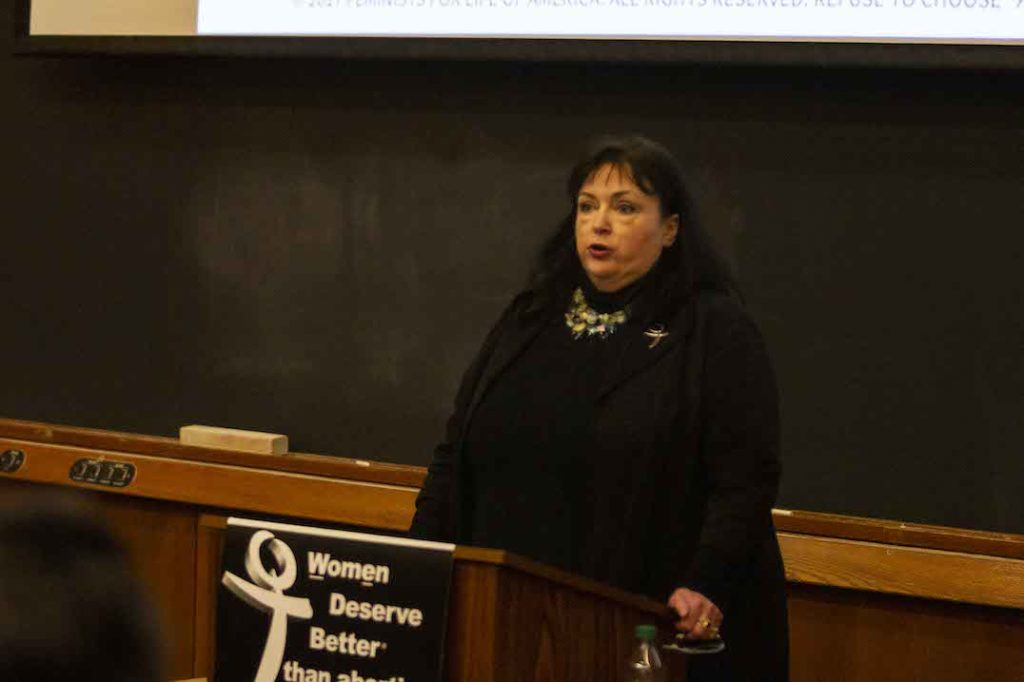 Feminists for Life President Serrin Foster gave a lecture on Oct. 3 titled “The Feminist Case Against Abortion,” hosted by the the Boston College Pro-Life Club. Unlike the previous anti-abortion event the club hosted in March, Foster’s talk was met with neither protests nor tense exchanges between the speaker and the audience members.

Although the talks themselves were different in tone, the Pro-Life Club anticipated “residual anger” from its previous event—“Lies Feminists Tell with Kristan Hawkins”—to carry over into this year’s talk, according to Annemarie Arnold, president of the Pro-Life Club and MCAS ’21.

The club took precautions similar to those it took for last year’s event, which included enlisting support from the BC Police Department and Robsham Theater Arts Center.

“At the end of the day, these measures weren’t necessary: we didn’t encounter any resistance to the talk and attendance was good,” Arnold said in an email to The Heights.

Like Hawkins’ talk, tickets were required for admission, but unlike last time, they did not sell out, which Arnold attributed to the event’s delayed promotion. A setback in receiving the Office of Student Involvement’s signature made it difficult to publicize the event well in advance, she said.

Foster began her lecture by stating that she is a feminist, before listing many historical feminists that held anti-abortion views, including Mary Wollstonecraft and Susan B. Anthony. Using these historical figures, Foster argued that feminism has steered away from the ideologies of the movement’s pioneers, who considered abortion “disgusting and degrading.”

Foster then argued that pregnant women are discriminated against both at school and at work, which puts them at a disadvantage in those settings. Women do not receive sufficient support when they are pregnant, Foster said, and they may feel forced to get an abortion because they are in a poor situation. She said that unless these issues are solved, abortion will not improve the condition of women.

“Half of all abortions are repeated, which is evidence that women go back to the same situation, and nothing has changed, and they end up with the same circumstances,” Foster said. “Abortion solves nothing. But these are the people that we need to reach and who we need to serve and who we need to focus on, because a part of this is about shame and fear.”

Foster also said that the concept of fatherhood is diminishing and that men should have their share of responsibility in taking care of mothers and children. Feminism is not about matriarchy, but about equality between men and women, Foster said.

An imbalanced responsibility between a child’s mother and father can lead to many difficulties, according to Foster. Women are becoming impoverished because of a lack of child support, Foster said, but the worse poverty is that many children won’t know who their fathers are.

Foster also questioned the safety of abortions, even those provided by licensed institutions. She cited stories of girls dying after abortion, with some of them as young as 13 years old.

Foster also made the case that pregnant women should not get an abortion just because they’ve learned their child has a disability. She spoke about how people with Down syndrome can still bring happiness to people around them. Foster also referenced the idea of relativity, in which people who are perceived as miserable may be happy from their own perspective.

She recalled a lecture she gave in Berkeley, Calif., at which a protesting audience member told her that she shouldn’t force women to have their babies. She said that she never intended to force women to do anything but that she was merely suggesting solutions.

She also said that no matter how monstrous a child’s father is, the child is a human being on its own and, therefore, does not deserve an abortion.

“As advocates of life and peace and justice, as feminists, we will never trade one form of violence for another.” Foster said.

Foster also spoke about alternatives to abortion. She mentioned a student at the University of Virginia whose mother asked her to give up her child when she was pregnant. Foster’s sister, however, allowed the student to live with her and tried to find support for the student. The student gave birth to her child, reconciled with her mother, and continued to finish her degree, according to Foster.

Foster listed many universities that have facilities or organizations that support students who are also mothers. She said that other states should follow the example of California, which has passed a bill to support student mothers. The bill prohibits postsecondary schools from refusing to accommodate pregnant graduate students and from forcing them to take a leave of absence, among other policies designed to protect against their discrimination.

Foster said that anti-abortion views are compatible with feminism, and she encouraged her audiences to join the ranks of the historical feminists in opposing abortion.

“If you work to systematically eliminate the root causes and drive women to abortion, then you already walk in the footsteps of Susan Anthony and other famous fellows—the pro-life founders who led the first way to the successful accomplishment of the 19th Amendment.”

Arnold expressed that the event turned out well in the end, even though she was initially concerned that ticketing the event would polarize the population of students who actually took the time to get a ticket.

“To me, the fact that students who were unsure about their own views on abortion were there made this event a success,” she said.