Home » BC Drops Second in a Row, Falls to FSU in Straight Sets 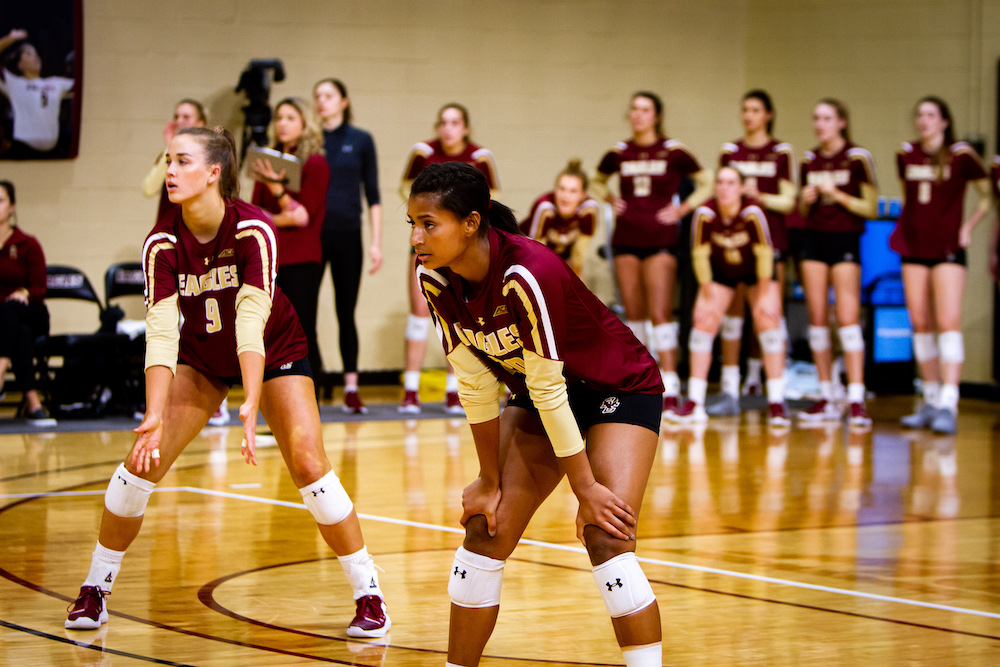 BC Drops Second in a Row, Falls to FSU in Straight Sets

Since opening conference play with a perfect 5-0 record, Boston College volleyball has quickly been reminded of just how difficult it is to grind out wins in the ACC. After dropping a three-set decision to No. 3 Pittsburgh last Sunday, the Eagles made the trip down to Tallahassee and were overwhelmed by Florida State’s combination of size and power, falling to the Seminoles by the same 3-0 scoreline.

The first set was incredibly close, with the two teams trading points early. FSU’s Jasmine Martin started the game off strong with a block and a kill within the first three points. That didn’t shake the Eagles, though, as the Seminoles’ early success was met with great resistance. BC’s Clare Naughton, after being quiet through the first few points, hammered a monster kill through the FSU block to bring the Eagles within one. The same back-and-forth style continued throughout the set.

With BC facing an 11-8 deficit in the first, Madison McKnight lofted a beautiful serve into the gap between the front and back line for an ace. But McKnight drove her next serve squarely into the net. Martin then resumed her dominant play. She recorded four kills and three blocks in the first set, including a vicious spike to put the Seminoles up 21-17. BC came storming back to tie the set at 24, but in the end, a kill from FSU’s Emma Clothier sealed the set after a long rally.

The second set was not as tight, although both teams made runs of their own. With the second frame tied at five points apiece, Seminoles middle blocker Taryn Knuth began an impressive defensive run, as she recorded a remarkable six blocks. Knuth set FSU on a 4-0 run to go up, 9-5. The teams then proceeded to go back and forth again, but soon it didn’t matter. The Seminoles’ front line stood 6-foot-3, 6-foot-4, and 6-foot-3 from right to left, and the height proved too much for the Eagles. FSU ended the set on a 4-0 run to win the second frame, 25-20.

The third set was by far the most exciting. It featured a blown lead from the visitors, three challenges, and a final score of 31-29 in the Seminoles’ favor. BC jumped out to an early lead with Amaka Chukwujekwu leading the way with a pair of kills. Knuth wouldn’t let the third set slip away, as she and Chukwujekwu traded blocks on consecutive plays. BC led, 11-6, and it looked as though they would make a run and steal a set on the road.

After losing a challenge off a kill that glanced off Martin, however, FSU stormed back and took a 13-11 lead. Next, Knuth, Martin, and Emma Chacone built a five-point advantage for the Seminoles—who were almost at match point with a 23-18 edge. Once again, the Eagles refused to go away, storming back to tie the set at 24 apiece. The teams then went on to repeatedly trade set points, three for BC and four for FSU. Yet, ultimately, a kill by Knuth sealed the sweep for the Seminoles.

FSU entered the matchup receiving votes in the AVCA Coaches Poll, so the Eagles were road underdogs. Still, BC has to improve in highly-contested sets. The three that the Seminoles won were decided by an average of three points, while the Pittsburgh loss was even closer—those were decided by just over two points per set. The Eagles are showing that they’re not to be taken lightly, but moral victories get frustrating over time. Head coach Jason Kennedy’s team will need to work on staying composed and closing out games if they’re to stay near the top of the ACC standings.