Home » No. 1 Denver Sweeps Weekend Series With BC in High-Scoring Finale 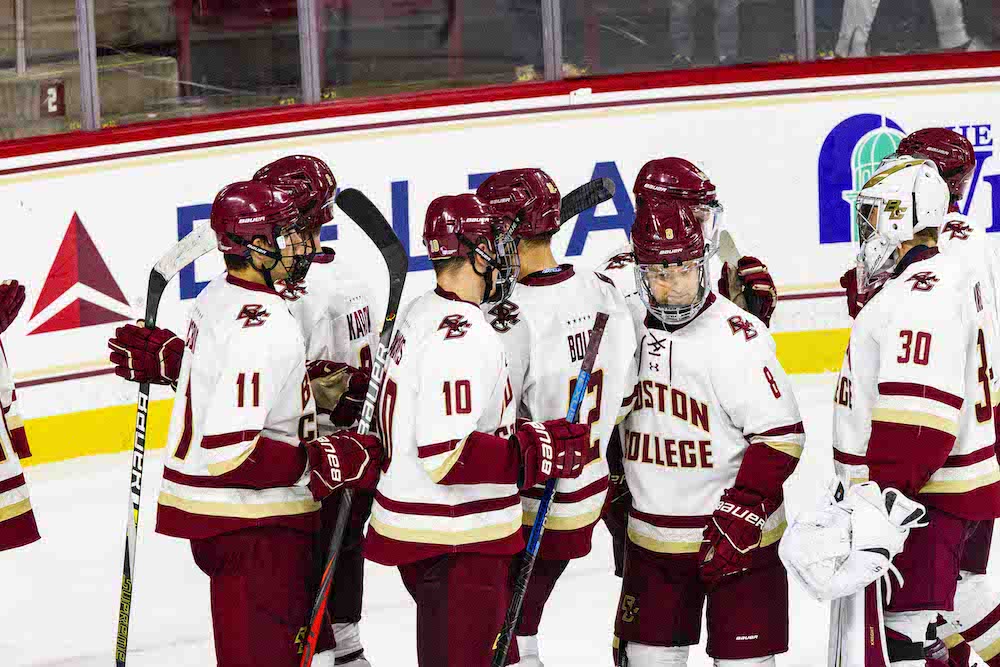 No. 1 Denver Sweeps Weekend Series With BC in High-Scoring Finale

Boston College men’s hockey’s weekend doubleheader against No. 1 Denver proved to be too much for the visiting sixth-ranked Eagles, dropping two straight games on the road. A tough 3-0 loss—more narrow than the final scoreline after a pair of empty netters—on Friday left the Eagles hungry for a win on Saturday, but after a hard fought game, BC came up just short in a thrilling 6-4 affair.

It looked good for the Eagles (2-2) early in the game, with goaltender Spencer Knight making four key saves in just as many minutes. Knight ended the day with an impressive 31 saves, but even that wasn’t enough to seal the deal for the Eagles.

BC came out of the gates aggressive, notching as many shots on goal as the opposing Pioneers (6-0) through the first 10 minutes. Their persistence paid off as BC’s Alex Newhook found the back of the net while shorthanded off a Julius Mattila penalty. Denver was quick to rebound, though, scoring the equalizer just four minutes later on a power play with the Eagles’ Matt Boldy in the box. Tyson McLellan capitalized with the man advantage, one-timing a pass from teammate Hank Crone after the puck cycled.

BC was caught on its heels, allowing the Pioneers to take the lead off a goal by Jake Durflinger just under a minute after they evened up the score. Denver’s attack-heavy squad stayed consistent throughout the entire game, testing the Eagles’ defense minute after minute.

But a resilient BC side wasn’t ready to give up yet. It notched five back-to-back shots in just 30 seconds while on a power play—all of which were saved by Denver’s goaltender Magnus Chrona. Chrona eventually let up, leading to a score by junior Aapeli Räsänen—he tucked away a rebound after Mattila’s effort.

Both teams traded offensive chances over the course of the last seven minutes of the period but went into the first break tied up at two goals apiece. The game looked to be much more in the Eagles’ favor after the first period than the night before, as they nearly matched the Pioneers shot-for-shot and maintained an even score.

The second frame, on the other hand, was a very different story. Just one minute in, Denver regained the lead on a score by McLellan, his second of the night, as he buried a wrister following another Crone assist.

BC was then penalized for having too many players on the ice, giving Denver a power play and a great opportunity to expand its lead. The Pioneers did just that after testing Knight with three consecutive shots on goal, but the BC netminder couldn’t hold their attack forever. Denver’s Ian Mitchell put one behind Knight, increasing the Pioneers’ lead to two goals.

A little over 30 seconds later, Denver scored again—this time Liam Finlay beat Knight from the slot—forcing BC to take a timeout and reevaluate. The Pioneers’ strategy seemed to work, as the Eagles temporarily stopped the bleeding. Though Denver maintained a strong offensive push, BC went the rest of the period without allowing a single score.

Going into the final frame, the Eagles trailed by three goals, but they didn’t let up. Just two minutes in, freshman Mike Hardman scored when the puck kicked off his skate and into the cage, cutting the Eagles’ deficit to two. The Pioneers, looking to hang onto their lead, unleashed a barrage of shots on Knight, but to no avail.

With just over five minutes left in the game, BC cut its deficit to one on a goal by Drew Helleson, who scored with a wrister off a feed from Hardman. The game looked encouraging for the Eagles, as the score was the closest it had been since the first period, but a Denver power-play goal from Bobby Brink with just two minutes left sealed the deal for the Pioneers.

Though going 0-2 on the weekend was not the way the Eagles wanted to build off their 2-0 start to the season, a strong offensive improvement from Friday to Saturday shows lots of promise for the rest of the year.

BC was able to hang with the top-ranked team in the country, and Knight has looked the part of a goaltender who can keep his team in games. The Eagles have depth in their offense, with players like David Cotton, Logan Hutsko, Räsänen, and Newhook, among others—and a four-goal effort against a strong Pioneers team is reflective of what is yet to come for head coach Jerry York and BC.