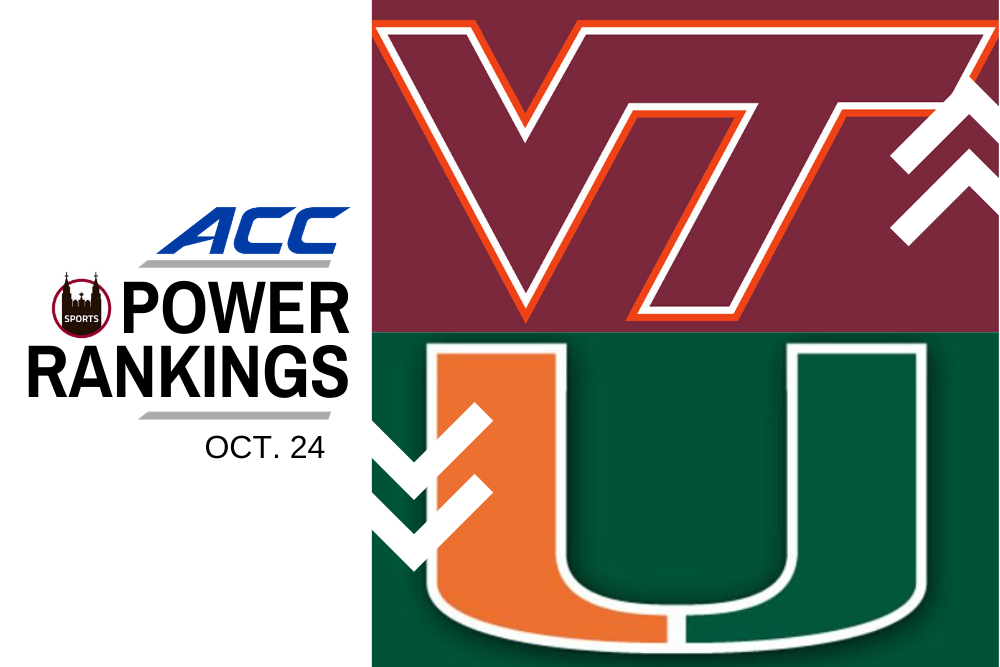 Clemson has dropped in the national polls each of the last three weeks, even with three straight wins, and that says a lot about how the nation regards the ACC. It has been a rocky year for the conference, as outside of the two ranked teams (who are a combined 13-1), everyone seems to be content with just beating up on each other at random. It’s a tough task to attempt to rank them, but here’s the latest edition of the ACC Power Rankings.

The Tigers dropped another spot in the polls, despite registering a 35-point win over Louisville for their 22nd straight win. Clemson just keeps trucking along, but its College Football Playoff chances will likely ride on another perfect season because the ACC as a whole leaves a lot to be desired.

The Demon Deacons narrowly escaped Tallahassee with a win last week, needing a 25-yard field goal from Nick Sciba in the final four minutes to beat Florida State. Wake Forest was outgained by the Seminoles but erased a one-point fourth quarter deficit to rebound from a loss to Louisville.

After a humbling loss to Miami in which the offense struggled mightily, the Cavaliers righted the ship and retook a share of first place in the Coastal Division with a dominating 48-14 win over Duke. UVA’s defense forced five turnovers and capitalized on the ensuing short fields, building a lead as big as 27-0.

Even with plenty of close calls, the Panthers refuse to lose. Saturday’s win over Syracuse marked their fourth straight victory of seven or fewer points. Pittsburgh saw an 18-point halftime lead nearly evaporate against the Orange, but a key trick play touchdown pass from Kenny Pickett was the difference. Oh, the Panthers defensive front has also gone wild as of late, racking up nine sacks to now lead the nation with 36.

The Tar Heels dipped back to .500 in the conference and have now lost four of five—but two of those setbacks have come by the slimmest of margins. A few weeks removed from a one-point heartbreaker against Clemson, UNC dropped a six-overtime thriller to Virginia Tech this past week. Head coach Mack Brown has done a great job with the group thus far, but it has a tough road ahead with Duke, UVA, and Pitt in the coming weeks.

The Cardinals came crashing back to earth after winning a pair of shootouts against BC and Wake Forest, as they ran into Clemson’s buzzsaw. Louisville picked off Tigers quarterback Trevor Lawrence twice in the first quarter, but he rebounded to carve them apart and the result was a five-touchdown loss in which the Cardinals managed just 263 yards of offense.

A bye week sure helped head coach Steve Addazio’s team, as the Eagles came out ready to play against North Carolina State. The defense—for the first time all year—set the tone early, and a bruising running game that featured five combined touchdowns from AJ Dillon and David Bailey powered the offense to a 45-24 rout. If BC’s defense can continue to take strides forward and backup quarterback Dennis Grosel is worked into the offense effectively, the Eagles have the pieces to get bowl eligible.

All year long, the story around the Hokies has been that of dysfunction. Somehow, though, Virginia Tech enters this week with five wins and has beaten conference opponents Miami and UNC in the last three weeks. The Hokies needed six overtimes to beat the Tar Heels—but did so with starting quarterback Hendon Hooker injured—and now have a bye week to prepare for a homestretch as they aim for a 27th straight bowl-eligible season.

The Blue Devils entered last week having won four of five and had come within a field goal of knocking off Pittsburgh. They seemed like they’d be able to hang with UVA—the Cavaliers’ head coach Bronco Mendenhall even thought it’d be a one-possession game—but instead were blown out by almost five touchdowns. Quarterback Quentin Harris was pulled for the fourth after a disastrous second quarter, and it’s back to the drawing board for David Cutcliffe.

Head coach Dave Doeren brought the conference’s top rushing defense into Chestnut Hill and promptly surrendered more yards on the ground in one game than the Wolfpack had all year. It was a brutal performance as N.C. State was pushed all over the field, and it saw yet another change at the quarterback position as Devin Leary quickly replaced Bailey Hockman.

After a slim two-point loss to Wake Forest, the news around the Seminoles has been focused on the status of head coach Willie Taggart. The rumor mill is swirling, even though FSU athletic director David Coburn describes it as “complete nonsense.” Either way, the Seminoles enter this week with a must-win game against Syracuse, which has yet to notch a conference victory.

If you remove the first half from last week’s game against Pittsburgh, the Orange would be well on its way to a first ACC win. Instead, the 24-6 hole it dug was too much to overcome, and it sure didn’t help that the offensive line is unable to protect its quarterbacks in Tommy DeVito and Clayton Welch—the former left with an injury but is expected back this week. The Orange, like FSU, badly need a win this week, which makes Saturday afternoon’s game an intriguing matchup.

The Hurricanes were poised to defend their home turf and narrowly beat Georgia Tech, but instead saw their field goal blocked at the end of regulation and went on to lose a stunner in overtime. Miami, under Manny Diaz, is off to its worst start in 22 years and has struggled to see the ball bounce its way. In all four of their defeats, the Hurricanes have lost by a touchdown or less, and special teams has played a big part in that.

The fact that the Yellow Jackets knocked off Miami is a fitting encapsulation of this year’s ACC. Georgia Tech entered having lost four straight—including a shocking loss to The Citadel—and had yet to score more than 24 points in a game this season. So, it was shocking yet somewhat unsurprising in the context of this year that the 18-point road underdog Yellow Jackets were able to pull off the upset.