Home » Notebook: Defense to Go Back to the Drawing Board After Embarrassing Loss to Tigers 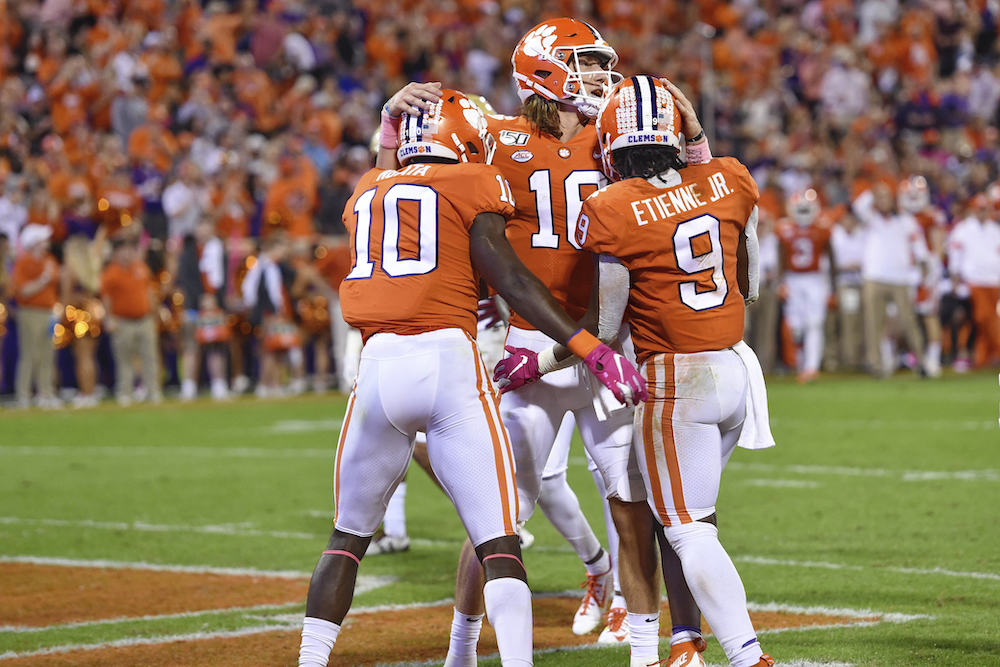 Notebook: Defense to Go Back to the Drawing Board After Embarrassing Loss to Tigers

Boston College football completed just six passes, went three-and-out seven times, and totaled 11 punts on Saturday night in Death Valley. It felt like 2016 again, only this time it was worse.

No. 4 Clemson, which entered as 35-point favorites, nearly covered the spread in the first half, staking itself to a 38-7 lead by halftime. Two more touchdowns in the third frame gave the Tigers a 50-burger and let Trevor Lawrence and the starters watch the final quarter and a half from the sidelines. But even with the backups in the game for the final 23 or so minutes of play, the Tigers ended up recording 674 total yards.

That’s the most BC’s allowed in program history and the second time an opponent has reset that mark this season (Louisville logged 664 yards in Week 6). Eagles head coach Steve Addazio had no answers for Clemson’s defense and, for the ninth year in a row, the Tigers (8-0, 6-0 Atlantic Coast) handed BC (4-4, 2-3) a loss. Not just any defeat, though, but a 59-7 blowout—the largest margin of victory in the teams’ all-time series and the biggest loss, in terms of point differential, in Addazio’s seven-year tenure.

Unlike last year’s top-20 College GameDay featured matchup, Saturday night’s game showcased one team with the talent to contend and another just scraping the bucket for bowl eligibility:

BC failed to get off the ground running

The Eagles came into the game with the sixth-best rushing attack in college football. They were hot off a week in which they ran for 429 yards against North Carolina State—which, at the time, boasted the top-ranked rushing defense in the ACC—and entered Memorial Stadium averaging 278.3 yards per game on the ground. With Anthony Brown out for the year and Dennis Grosel’s completion percentage below 40 percent, BC needed to live off the run on Saturday. Aside from a few nice AJ Dillon runs, BC struggled to follow through with its game plan. The Eagles rushed for a combined 24 yards on their first three drives and finished with just 97 yards on the ground.

Grosel had no time to throw

The former preferred walk-on only completed 3-of-14 pass attempts in his first career road start, dropping his season completion percentage to a mere 35 percent. But he could only do so much, considering that Clemson made BC’s offensive line—which was previously tied for first in sacks allowed this season (just three through seven games)—look inferior. Grosel had very little time to throw and was hit four times in the first half alone, in addition to be sacked twice in three quarters of play. A near interception, a botched flea-flicker, and a strip sack were all byproducts of Clemson’s fierce pass rush.

Clemson averaged 8.4 yards per play throughout the night, and 9.6 yards per play in the first half. Tigers head coach Dabbo Swinney got his playmakers in open space, and the rest was history. With just under six minutes left to play in the third quarter, Clemson receivers had already piled up 200 yards after the catch, compared to BC’s measly seven. No one exploited the Eagles’ porous defense more than Diondre Overton. The graduate wideout, who came into the weekend with just seven receptions for 72 yards, hauled in three balls on Saturday, each of which went for touchdowns of 22, 63, and 34 yards. Clemson simply proved too fast for a BC defense that’s struggled with wrapping up all year.

Dillon’s record-breaking run gets lost in the blowout

Following his 223-yard, three-touchdown Week 8 performance, Dillon traveled to Clemson, needing just 75 yards and two touchdowns to break a pair of all-time program rushing records. The junior running back got the first but not the second on a night where he was just about the only Eagle that could move the needle on offense. With his mother in attendance, Dillon surpassed Andre Williams for the most career rushing yards in BC history (now has 3,741). He did it on a 10-yard run near the start of the third quarter. Unfortunately for Dillon and his team, the ensuing snap consisted of the star tailback failing to pick up the block in pass protection, leading to the Tigers’ strip sack and subsequent scoop and score.

Lawrence could do no wrong

Prior to Saturday night’s game, all the talk around Clemson was about how the Tigers had dropped three spots in the AP Poll in the past three weeks despite not losing a game, and it always came back to the play of its famed quarterback. Lawrence, who threw eight interceptions in the first seven games this season—double his 2018 total—was thought to be taking a step back after apparently cementing himself as the next big NFL prospect. But against BC, Lawrence silenced the doubters. He completed his first nine passes and finished 16-of-19 for 275 yards and a trio of touchdowns. The sophomore also tucked the ball eight times, picking up 42 rushing yards. And that was all within two and a half quarters.

Lawrence had a field day, but so did Travis Etienne. The junior running back, who posted his first career 100-yard rushing game versus the Eagles back in 2017, once again pummeled BC. On just 16 rushes, Etienne totaled 109 yards on the ground, tallying a hat trick of touchdowns in the process. He averaged 6.8 yards per carry and seemingly gashed BC every single way—on the outside zone, through the tackles, and at the goal line. Notably, Etienne ran plowed through both John Lamot and Josh DeBerry en route to the end zone in goal-to-go distance. All in all, BC gave up 302 rushing yards, marking just the 10th time since 2000 that an ACC team allowed at least 300 yards on the ground and through the air in a conference matchup.