Few student groups are afforded as warm of a welcome as that of My Mother’s Fleabag at its fall café on Thursday. Minutes before the comedy show’s commencement, various members of the group ran through the wooden doors of Gasson 305 to the ear-splitting sound of screams as they threw candy at the adoring crowd.

An unsuspecting passerby would be likely to think that a celebrity had made a guest appearance in the stately classroom, and to an extent they would be right: At their fall café, Fleabaggers enjoyed temporary campus-celebrity status. Some fans brought signs, and others called out the names of specific members between games, but all laughed.

It isn’t unusual for comedy groups to receive ample applause upon entrance. The friends of the campus comedians show up in droves to publically offer their undying support to the people who make them laugh in the confines of their coveted Vandy eight-mans and (somehow even more coveted) O’Neill 1 study booths. Hype is built up through social media campaigns, during which the comedy groups will create a Facebook event or pen a persuasive Instagram post. Despite the unusual lack of promotion around Fleabag’s fall café, the comedy group still managed to pack the lecture hall and get the crowd rowdier than ever.

Fleabag first attended to important matters of business. The group introduced its newest members, Luke Hurrell, MCAS’23, and Teva Kenny, MCAS ’23. Without further ado, the group launched into a game of “Freeze,” during which Sam Harmon, MCAS ’21, revived his war bit, screaming, “Will the war ever end?” while clutching Graysen Parish, MCAS ’22. Harmon gained a reputation for making references to various wars in past shows. Hurrell showed off his improv chops when assuming a laid-back position, asking, “What’s your name again?” with his arm draped around Maqui Bernava, MCAS ’22. In what was a strong showing, the off-the-cuff remark sent the room roaring, and showed promise for the next generation of Fleabag, which will celebrate its 40th anniversary in 2020.

Maya Rao, MCAS ’21, struggled to speak over the loud cheers of the crowd when introducing the second game, which yielded scenes based on skydiving, a play, and an arrest. Rao, who, like Harmon, was one of The Heights’ Five Funniest People at BC, later drew raucous laughter from the crowd when her playdate with Parish was interrupted by two strange men: her body-building father portrayed Brendan McGinty, a co-director of Fleabag and MCAS ’20, and a wholly incompetent doctor portrayed by Mike Bamford, a Five Funniest alumnus and MCAS ’20. The game was a new addition to the group’s usual lineup, in which each cast member on stage had to die by the end of the skit.

Brandon Portillo, another member of this year’s Five Funniest, a performer from Hello…Shovelhead!, and MCAS ’22; also made a brief appearance while filling in the blanks for Rao during an improv game that took her on a dinner date with Parker Bell, MCAS ’22.

Randomness was a key factor for Fleabag’s success throughout the night. A “My Movie” titled Free Big Turtles saw the liberation and reincarceration of Parish, Bernava, and Bamford, who all hunched their backs to give the appearance of shell-like posture, while Claire Wilson, LSOEHD ’20, recuffed the “turtles.”

The group also took offbeat audience suggestions for a party quirks game in which Hurrell stuck to a strict liquid-only diet, Harmon posed as Kylie Jenner, and Anna Livaccari, a co-director of Fleabag and MCAS ’20, had head lice. Wilson, the naïve host, swiftly guessed all of the quirks, leaving plenty of time for America’s oldest collegiate improv comedy group to finish out the night with a longstanding tradition: a final game of “185 Blanks on the Wall,” which included sketches about cheese and bodies of water.

Correction, Nov. 17, 11:25 p.m.: A previous version of this article stated that Claire Wilson is a student in the Morrissey College of Arts and Sciences. Wilson is, in fact, a student in the Lynch School of Education and Human Development. 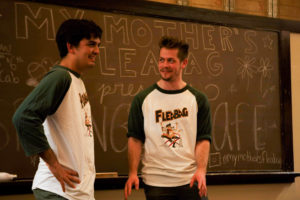