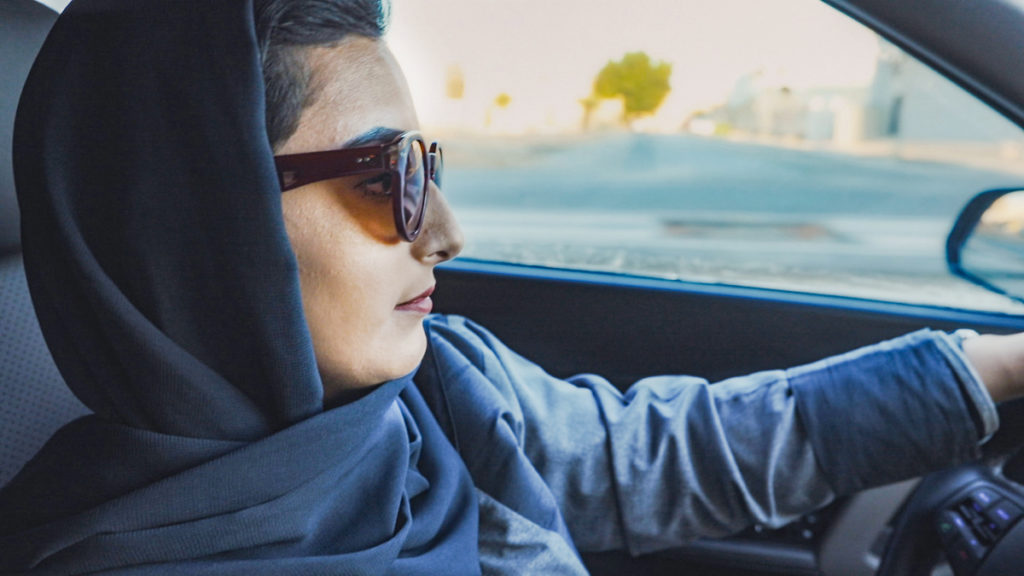 In June 2018, Saudi King Salaman lifted a decades-long female driving ban, sparking new confidence and hope for the future of women living there.

For the women in Saudi Women’s Driving School, driving is about more than just ease of getting around—it is freedom and independence, providing a way for them to take ownership of their own lives.

The film does a magnificent job of visually showing the freedom that women gain by being able to drive. Sweeping shots of tall Saudi mountains, vast never-ending deserts dotted with camels, and sand dusting up behind the wheels of the car remind the audience of why we all love to drive—the feeling of being absolutely limitless when you have the power to go where you want, when you want.

The most heartwarming moment in the film comes at the end when Sarah Saleh, a student at the Saudi Driving School, takes her driver’s test, and gives her female instructor a massive hug after she passes. Gornall is able to capture the feeling of pride and accomplishment in Saleh’s eyes, beautifully crafting a narrative of female empowerment and support.

“I feel like I have started a new life because it’s something I’d been waiting for, something I was hoping for,” Saleh said.

Although the documentary aims to be generally uplifting, the most interesting theme that Gornall explores is the juxtaposition of women’s joy and hope alongside the overbearing patriarchy in Saudi Arabia.

Early in the film, interviewers talk to driving instructor Amal al-Jaber and her family about the role of wives in Saudi society. Amal, her daughter Ghaida, and her husband Abdulaziz sit on the couch together, clearly uncomfortable with the subject.

The entire conversation is fascinating in the way that Amal and Abdulaziz interact, highlighting the precariousness of the female status in Saudi Arabia. Abdulaziz talks solely of traditions and customs, and cuts in regularly when Amal is trying to give her definition of what she thinks her role as a woman is. Ironically, Abdulaziz says that he is in favor of women’s rights, but firmly believes that women must remain in the home so they can be protected by men.

“[The father] is not in charge of everything, but he’s the one who sets the right direction,” Abdulaziz said.

This sentiment is echoed in a conversation that Shahad al-Humaizi, an Uber driver, has with one of her male passengers.

“To be honest, at first I was a bit scared when they announced that women would be allowed to drive,” he tells her in the film.

He talks about how women have emotional brains, and that while that may not prevent them from being able to drive, he worries that giving women one right may cause them to irrationally want more.

This disagreement among men and women about what driving (and by extension women’s freedoms) should look like in Saudi culture is why Saudi Women’s Driving School is so fascinating. It leaves the audience wanting to know more about gender activism in Saudi Arabia, and why it’s so complex.

Like any good documentarian, Gornall provides more questions than answers, mirroring the paradox that seems to be in place in Saudi Arabia. The government gives women the freedom to drive, and even more recently, the freedom to travel without male permission, while simultaneously arresting and imprisoning activists who fought for these freedoms only weeks or months before these decrees were enacted.

Are women actually free in Saudi Arabia? Is gender oppression a result of culture? And do Westerners have a right to criticize it? Is driving a step toward gender equality or simply a tactical movement by the government to advance economic and foreign interests? No one—not even Saudi Arabians—seem to know for sure.

While Saudi Women’s Driving School might have been more compelling had Gornall explored the lives of these women in more detail (the film was only an hour long), the litany of questions it leaves lingering in the minds of its audience are a sign of a good documentary. Using Saudi Arabia’s newest drivers as an example, Gornall shows that issues of gender and politics aren’t always as black and white as they seem, and in doing so shows the complexity, hope, determination, fear, and anxiety that swirl around this conversation in Saudi Arabia today.